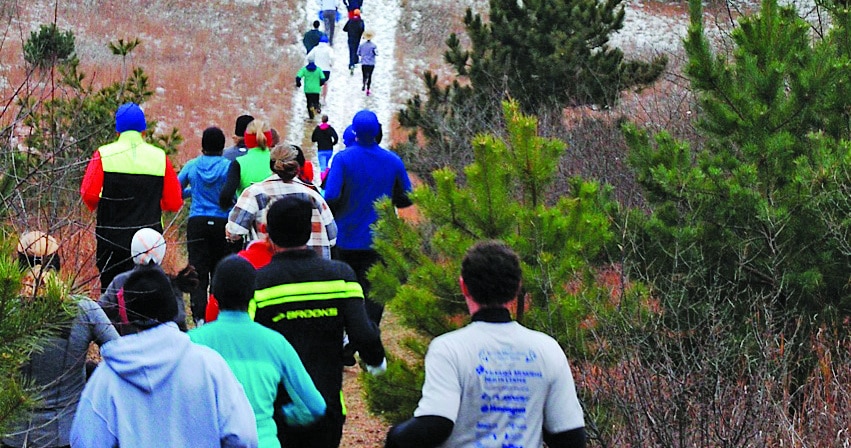 This essay about running the Farmland 5K European Style XC Challenge (which takes place this year on Saturday, December 6) was originally featured in the December 2014 issue of Traverse, Northern Michigan’s Magazine. Read on to find out more about how a small cross-country race provides a chilly challenge.

As the wind whips across the frosty farm field, I huddle with my husband, Joe, and our 10-year-old son, Andrew. The luckiest of the few hundred runners here for the inaugural Farmland 5K European Style XC Challenge have claimed spots near the bonfire to escape the bone-chilling gusts and temps in the low 30s. The rest of us resort to spending the final moments before the starting gun hugging running partners and bouncing in place to stay warm.

Cross-country races like this one take place, well, across country: through fields instead of along existing roads or trails. This type of race originated in 19th-century England, hence the “European Style,” but in the United States, most opportunities to run cross-country are for students or elite runners. In fact, Lewie Rasho, the East Bay Township farmer (and former runner) who owns this land, had created this cross-country route on his property for area high-school runners in 2002. This 5K is Andrew’s third ever, and for me, a low-key event to finish off a purposely laid-back racing season. Joe, Andrew, and I are lined up near the back of the pack, eager to try a new-to-us style of race.

At noon, the lean, weathered-looking Rasho fires a blank cartridge from a double-barreled shotgun into the air to send us off. The 3.1-mile course begins in snow-slicked grass, with a 10-foot-wide mowed path for us to follow. It first takes us into the wind, up a slight incline of meadow that ends at towering oaks marking the entrance to a short dirt path through the woods. Luckily, the runners are staggered before we reach this point—Rasho designed the route to avoid the bottlenecking that happens on many cross-country courses.

The course opens back up to a loop of grassy rolling hills covered in a light dusting of snow and crunchy ice—since you wouldn’t know a slick spot until you slipped on it, we tread carefully. When I’m not watching my step, I check out the line of runners ahead of me, their bright-colored hats and jackets stark contrasts against the gray-smudged landscape and overcast sky. Some runners have really embraced the weather: A few guys, clearly vying for the race’s “Most Scantily Clad” title—one of seven costume-award categories—are stripped down to bare chests and shorts. A pair of steep hills greet us just before the one-mile marker. Andrew, huffing and puffing, asks for a walk break, but he doesn’t need long. “Okay, I’m ready,” Andrew says before taking off.

Soon, the fastest runners speed by in the opposite direction—the first loop of the figure-eight-shaped route is run twice. “Well, we could always take a shortcut here,” Joe jokes to Andrew as we veer instead into the course’s second loop. I look to my son and can tell he is starting to get into a groove. We run the perimeter of these fields, faces flushed from effort and cold.
As we turn to run the final loop (the first loop, backward), Andrew looks focused, strong, and ready to take off without us, but we continue on together. We tackle the two large hills again, but this time in the opposite direction—and with no walk breaks.

By the time we’re back on the wooded trail, with less than a mile to go, our talk turns to the steaming bowls of chili and corn chowder and cups of almond-milk hot chocolate waiting for us—all homemade goodies from local businesses serving as race sponsors. We cruise on to cross the finish line together, and we each receive finishers’ “medals”: blue plastic tractors dangling from twine. After hugs and high-fives, we make our way to the food line, white puffs forming in the frigid air before us as we catch our breaths.

We savor our hard-earned post-race fuel while seated on hay bales near several finish-area bonfires as awards for times and costumes are announced. The race director reminds us that next year there could be a foot of snow on the course, and a bunch of us whoop and holler in response.

“You’re crazy” is a statement runners often hear from non-runners when sharing that our tough winters don’t stop us from getting outside. My reply? That old adage of “There’s no such thing as bad weather, only bad clothing choices.” It’s what I love most about running—that it can be done anywhere, at any time of year. And, as is the case with this early-winter race, good company makes the journey all the sweeter and more memorable.

The Farmland 5-K European Style XC Challenge started in 2012. It takes place the first weekend of December in Traverse City and now includes a bike race as well. Go to their website to learn more and register.

Heather Johnson Durocher, who writes from Traverse City, will participate in this year’s event on December 6 with her son Andrew, now 12 and a cross-country runner for East Middle School. She’s pretty sure she won’t be able to keep up with him. Heather publishes michiganrunnergirl.com.