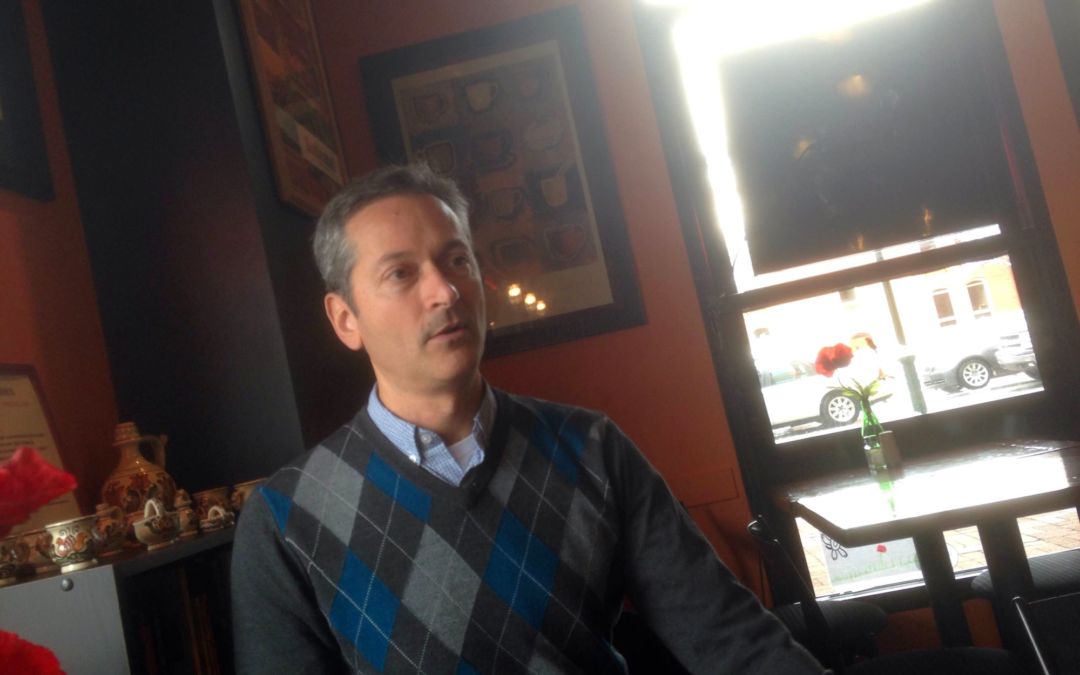 Free Wi-Fi throughout downtown Traverse City—yes, it’s soon to be real. The staged roll-out will begin Friday, December 5, aptly happening the same day Santa comes to town. Downtown Wi-Fi is a six-year-long goal of Traverse City’s Downtown Development Agency, so we thought we’d celebrate the achievement by grabbing some coffee at EuroStop Deli Cafe with DDA executive director Rob Bacigalupi and talk about the Wi-Fi (developed in partnership with MyNorth Media, Aspen Wireless and Traverse City Light and Power) and other initiatives on the DDA agenda.

Let’s start with the Wi-Fi. Give us a flyover.

Well, yes, it took a long time—we talked about it for six years, but I think the wait will be worth it because we are ending up with really good infrastructure. The thing about the Wi-Fi is not only is it a really good free service for visitors and locals for Internet use and wayfinding, but it’s also really good for municipal network things, like our new parking system that will allow people to add time to their meters from a distance. We will also see a big benefit during things like Cherry Festival and Film Festival when typically there’s so much cellular traffic that you get really slow Internet times if you are connecting that way. The Wi-Fi will take a lot of that traffic off of the cellular system and free up bandwidth.

Of course it was tough. It was emotionally tough losing Bryan, for me and for all the people in downtown. And every time you ran into somebody it was difficult all over again because you mourned with them. So, yes, just very difficult.

How did you respond as an organization?

Well, I had been around since 1998 and Colleen Paveglio had also been around a while, so we were able to jump onto things that needed attention. In addition, we had an intern, Nick, who was so sharp and he was able to backstop things. Like he took over the farmers market for me and just slipped into that really well and has done a great job with it. So that freed me up to focus on higher-level things. Nick recently became a full-time employee. Also, Jean Derenzy, from the county staff, has been such a great partner over the years and she stepped up to take on a lot of the Hotel Indigo things. That allowed me to focus on the upgrading of Garland Street.

How is Hotel Indigo [a boutique hotel on Grandview Parkway on the west end of downtown] coming along?

It’s moving forward. They have had one hurdle after another, but hopefully they’ve overcome the last one and will be open in 2015.

You mentioned Garland Street [the little street that runs past Hotel Indigo and Workshop Brewing and the Visitors Center] what will we see there?

We will be reconstructing the street and turning it into something called a “woonerf.” That’s a Dutch term that refers to an avenue that respects all forms of transportation, so cars and bikes would be allowed, but it would also be a pedestrian area. So, like the bricked circle in front of Hagerty Center. The Garland redesign will also direct more foot traffic in from Front Street.

That sounds like a very cool addition to TC … when will we see our woonerf?

It will be redeveloped in two stages. The first half would be completed near the hotel in spring of 2015, and the second half, near Union Street, would be in the second half of 2015.

Looking further into the future, what are some of the biggest changes Traverse City is likely to see in coming years?

Some day we’d like State Street to be like Front Street, with a lively retail and restaurant scene. Along with that, we are likely to see much more housing right downtown. And more of a range in housing choices. We have a lot of people working downtown who also want to live downtown, so there is demand for rental housing there. The basement rental apartments in the Milliken Building have a waiting list. Even micro housing could be in the mix.

What is one piece of advice you would give a developer looking at Traverse City?

This is a very engaged community. Things don’t happen here without people wanting to weigh in on it. And we are very design focused here. Design is very important to people in Traverse City. You have to respect community values and pay attention to design.

An Inside Look at Cordia