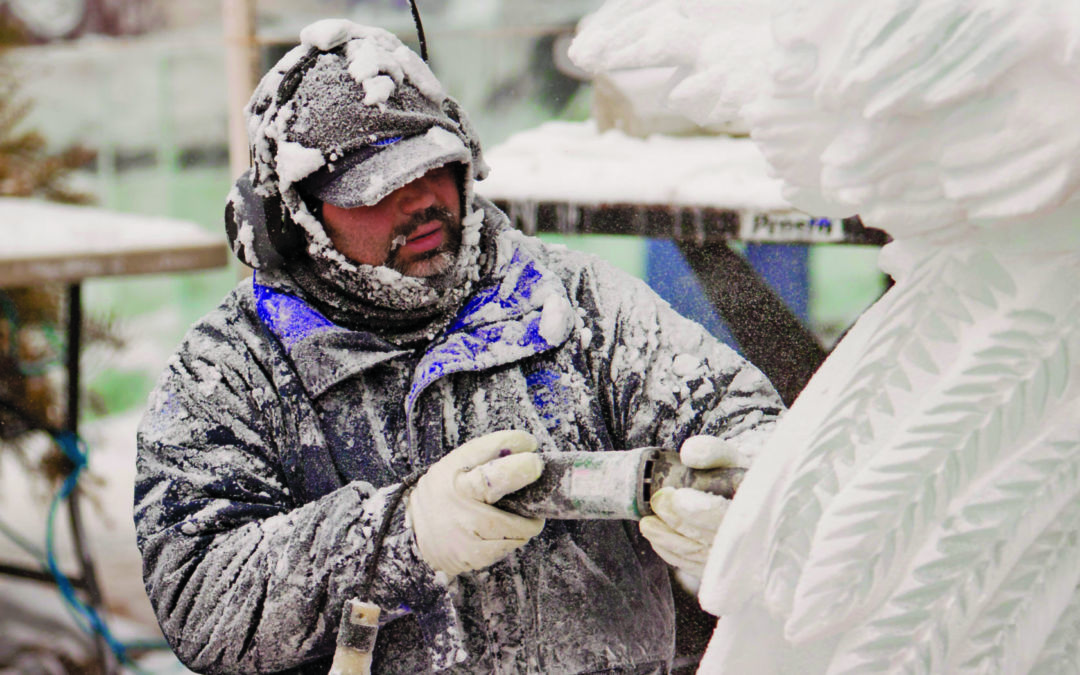 A Q&A with Ice Carver Aaron Costic was originally published in the December 2014 issue of Traverse, Northern Michigan’s Magazine.

Aaron Costic had aspirations of creating delicious food for a living, and though that career path didn’t pan out, something else great did begin in the kitchen for him: a passion for ice carving. And today, two decades after culinary school, Costic is known for his exquisitely designed frozen sculptures—he owns and operates Elegant Ice Creations, has been recognized both nationally and internationally for his work, and again will defend his champion ice carver standing at the Bay Harbor Ice & Spice Festival, held January 16–17 in the Village at Bay Harbor. We caught up with Costic to talk all things ice (including a sneak peek at what he’ll create at this year’s festival.)

Tell us how you discovered ice carving.

I started in a culinary program, at the University of Akron. I was going to be a chef, and we had a class where we sculpted a lot of things—chocolate, cheese, vegetables. And mine turned out pretty good. I went to some competitions, learned more about it—that was in ’89—and I was really encouraged by chef Richard Alford at the university. He did a lot of different kinds of carving, and a lot with ice.

What is it about ice that you find so appealing?

I think the immediacy of it. I like the way the light plays on it—it makes a reflective angle.

You’ve competed at the Bay Harbor festival for several years. What do you like most about the event?

It’s great because it’s far Up North, and there’s a better chance that it’s below freezing. One of the things I really like from a competitor point of view is everything happens in one location. Once we get into Bay Harbor, we stay right there. The organizers are great too—they do a wonderful job.

Last year your winning sculpture was titled ‘Family’ and featured three humpback whales. Can you give us a hint about what you’re carving this year?

I think it’s going to involve a rooster. That’s about as far as I’ve gotten. They always tell us how much ice and how much time we’ll have, and how many people you can have on your team (in this case, it’s me and a helper.) We’re given eight blocks of ice, which is 2,400 pounds of ice, and we have 12 hours—six hours the first day and six the second.

You’ve taken first place each year you have been there—what is your secret?

My secret is organization and preparation. You can prepare, but the way you prepare is very important as well. Some people say practice makes perfect or perfect practice makes perfect, and I agree with the latter. Many, many times I will practice … And I am one of the fastest carvers on the planet. It’s an advantage for me, and my pieces are more refined. I do have a gift for being efficient—not wasting any steps or cuts when you’re competing makes a huge difference.

A die grinder, which is like a high-speed drill. There are newer, more powerful die grinders, and with those you should have three different bits: one for cutting, one for shaping, and one for detailing. There’s definitely a variety of stuff you want to have—a chain saw, sanders, angle grinders.

And in between festivals and competitions, you’re running a successful ice sculpture business…

Yes, it was part-time when I started it in ’91 and by ’95 it was a full-fledged venture. Now we have eight people who work here. Not only do we sell ice carvings, we also sell tools to ice carvers. In order to do great ice sculptures you need to have the right tool for the job and those are constantly evolving. We’re constantly developing the latest and greatest so you can do things more precisely and faster.

The Bay Harbor Ice & Spice Festival takes place January 16–17, 2015, in the Village at Bay Harbor. The festival is sanctioned by the National Ice Carving Association, and Bay Harbor is one of the stops on the National Tournament of Champions for Ice Carving. Professional and amateur divisions of carvers who travel here from across the country and Canada will win medals and cash prizes of over $12,000.