Press on Juice in Traverse City 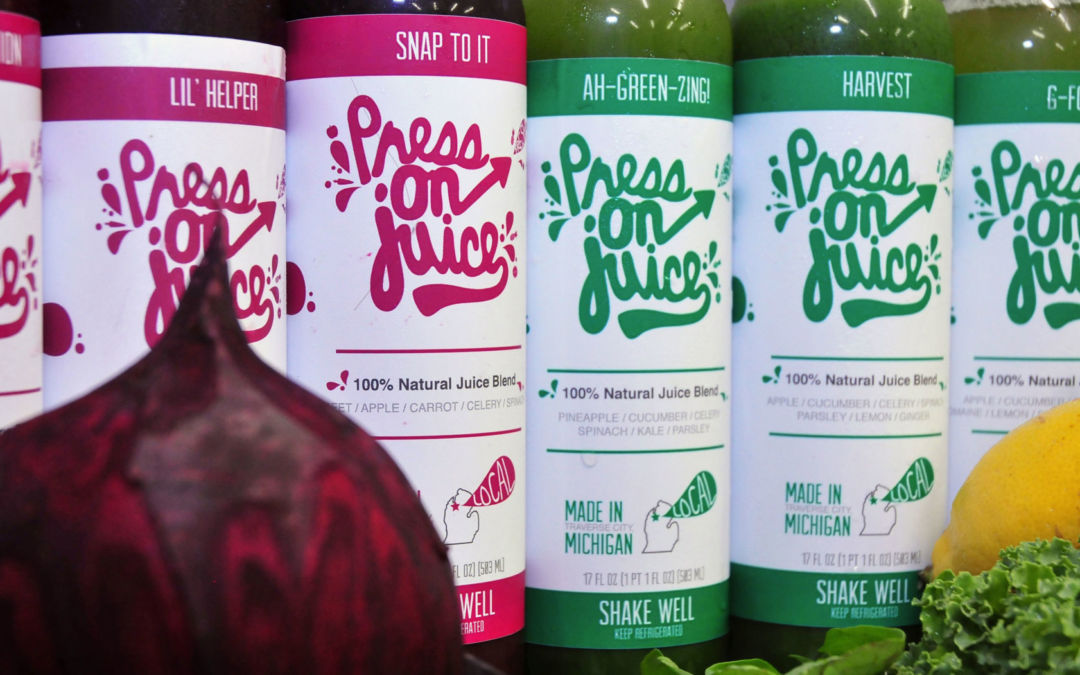 Two years ago, Kris Rockwood was experiencing joint pain in her knuckles and then her elbows. And it kept getting worse. When it continued to progress she went to her doctor and was diagnosed with rheumatoid arthritis, an auto-immune disease.

After her diagnosis, she was inspired by the book China Study and encouraged by her doctor to stop eating processed foods and switch to a more plant based diet.

“I started to eat a plant based diet which included smoothies and juicing,” she says.

After starting to juice regularly Kris started seeing improvements in her health. She was able to cut down on her medication and she lost 30 pounds. After two years of juicing and eating healthier, today she is off all of her medication.

Although drinking juice on a regular basis made her feel better, it took would usually take Kris more than an hour to make two juices.

“I would have one smoothie and two juices a day, but that would take me at minimum an hour to do,” she says.

So looking at alternative she did research about buying juice online, but the sticker price was high– usually around $100 to order from a major city like San Francisco or New York.

“You can afford to order once or twice and it’s a pure luxury item, but you want the juice because of how great it feels,” she says.

Around the same time Kris was attending a monthly meeting as part of a women in business group. She brought up the expense of juicing and her passion for it and after a while they suggested she start her own business.

“I told them no way, it’s so much work to juice, but they made fun of me for saying it and made me do it.”

After six months of encouragment, Press on Juice was born. First Kris worked at home to figure out recipes and then acquired a commercial kitchen and started juicing in June 2014.

“In the summer I was able to use a lot of local and organic products from the farmers market,” she says. “Next summer I will be more in tune with the local farmers and their schedules so I can order more products at a time.”

Since the summer, her business has been booming and she offers seasonal juices that align with the seasonal products available (each with 2 pounds of fruits and vegetables or more!) She sells juice at the store as well as select locations around Traverse City. Because her juices are unpasteurized she has to sell items herself, which limits how many places the juices can be sold.

“People love that it’s not pasteurized and they know they are getting nutrients that veggies and fruits give you,” she says.

Despite not having her juices available in many places (this is something that will change in the future) she wants to spread her message to live a healthier life.

“There are links to eating a plant based diet and reducing the risk of health issues. I have read a lot of different studies about this and there is a 63% reduction in weight, diabetes, etc with most people,” she says. “I am not telling you anything new, but it’s hard. Press on Juice is trying to bring really yummy snack food to carry with you.”

Kris says that it’s taken her a long time to overcome a processed food diet and that she still has her guilty pleasures, but that juicing has changed her life for the better.

“It took a long time for me to stop,” she says. “My whole philosophy is how can I make a carrot taste as good as a Dorito? I want to provide these juices as an alternative to fast food and I think people are desperate to have inexpensive fast food alternatives.”

Currently she offers juices for all ages, from a Bunny Brew that has carrots, oranges and pineapple to a seasonal juice called Jubilee that has cranberries, oranges, apples and ginger.

In the next couple of months her goal is to have a retail location with grab and go items as well as a smoothie bar, but for now Press on Juice is located off of Garfield in Traverse City.

To learn more about Press on Juice, including where you can buy it and the different types of juices in season click here.

Photo(s) by Press on Juice