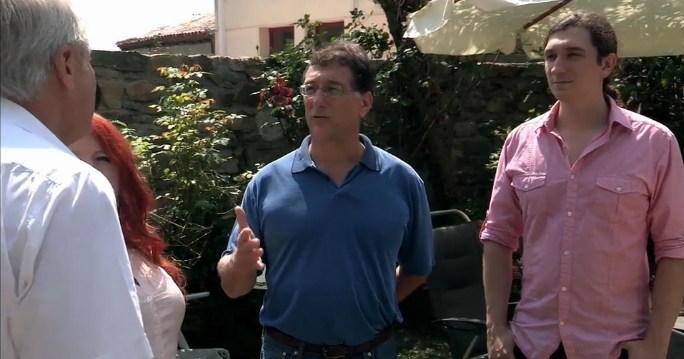 Read on for the backstory on Oak Island and the Lagina brothers and catch the latest Oak Island interview on the eve of season 3!

The program is into its second season, but it seems like there are a lot of unanswered questions and many theories yet to be proved or disproved. How has the complexity of Oak Island’s history complicated the making of a TV show about it?

Rick: Well, there are a lot of theories. Everyone’s got a theory, and they range from leprechaun gold, to upside-down Viking ships, to Knights Templar, to Spanish conquistadors, to aliens…you name it.

I’ve always been fascinated by the story of Oak Island since I was a little boy, and I was excited to know that the show would get out to all kinds of different people with different interests—with different approaches to the story and to the island. But I was fearful that we wouldn’t be able to share all of the story with the audience. It’s a 219-year story. Very complex, very intricate.

So far, the second season’s climax happened when an underground core sample brought up what appeared to be a piece of a wooden structure that’s covered in a layer concrete—possibly a bit of a treasure vault.

Marty: I’m not sure if I really believe it. Craig is at 60% that the vault is original. I’m not. I want it to be, but there are other possible explanations. In the 1800’s, the Money Pit collapsed—a vertical tunnel was dug that ran adjacent to the Money Pit and below the depth of where the vault is supposed to be, the idea being that a lateral tunnel would connect across. Well, those tunnels collapsed, and the Money Pit crashed in, too. I believe that the structure we bore into might be part of the Money Pit after it crashed. So I’m not thoroughly convinced that it’s the vault.

Rick: But what’s been nice about the second season is this: people have been captivated by the story. And we can’t stop midstream. We’ve made some progress. We’ve found a coin that predates the Money Pit’s discovery. We’re only half way down the road, why would we quit now? So it’s almost a sense of duty—duty to the people who love the story and who want to learn more about it. And a duty to ourselves to see this thing through.

Were you excited about finding the structure in spite of the fact that it might be a red herring?

Marty: Craig and I are so used to drilling. Whenever you drill an oil well, you’re always hoping you’re going to hit, and then maybe you get some signs that it looks good. But if you let yourself get all excited about it, then you’re setting yourself up for disappointment because there are a lot of ways it can turn into a dry hole: something doesn’t work, or maybe we’ve hit salt water instead of oil. We’ve been treasure hunting, in a sense, for forty years. And we don’t let ourselves ride that emotional rollercoaster anymore. On Oak Island, there are times when it looks like we’ve made a real breakthrough, but—if we don’t look elated—it’s because we’ve learned to wait until we get all the data.

Rick: Oak Island teaches you not to be elated.

Marty: It teaches you to be humble. It’s adversarial. People have been losing their fortunes and their lives for 200 years trying to solve it.

Rick: This is where my brother and I diverge. There’s a story buried on that island that I want to figure out, and I think that’s the real treasure. A fabled, long-lost treasure would be fantastic. But there’s a wonderful story written on that ground, and I want to know the who, what, when, where, why and how.

Alex: I would like to see, more than anything, some verification of things that have already been discovered. That’s why, in the first season, we searched the beaches for coconut fiber—which was something that was documented—because we wanted to see if it was really there. A lot of things have been done on Oak Island, and while records may have been kept well by one person, they didn’t transfer to the next person, so a lot of these discoveries have been lost during all the excavations.

I’m not as excited about things that lead to new theories, but things that confirm existing theories. Finding the coin was pretty exciting, but what does that point towards? On the other hand, if you don’t believe the old stuff, you’ve got nothing.

Marty: Well, what if we found something fabulous right now?

Alex: Then that would be a coincidence. If all the old stuff isn’t true, then we’re just digging on an island without a reason. Some of it has to be verified. That’s what I want to see.

Interview with Rick Lagina on the eve of Season 3

Photo(s) by History, The Curse of Oak Island