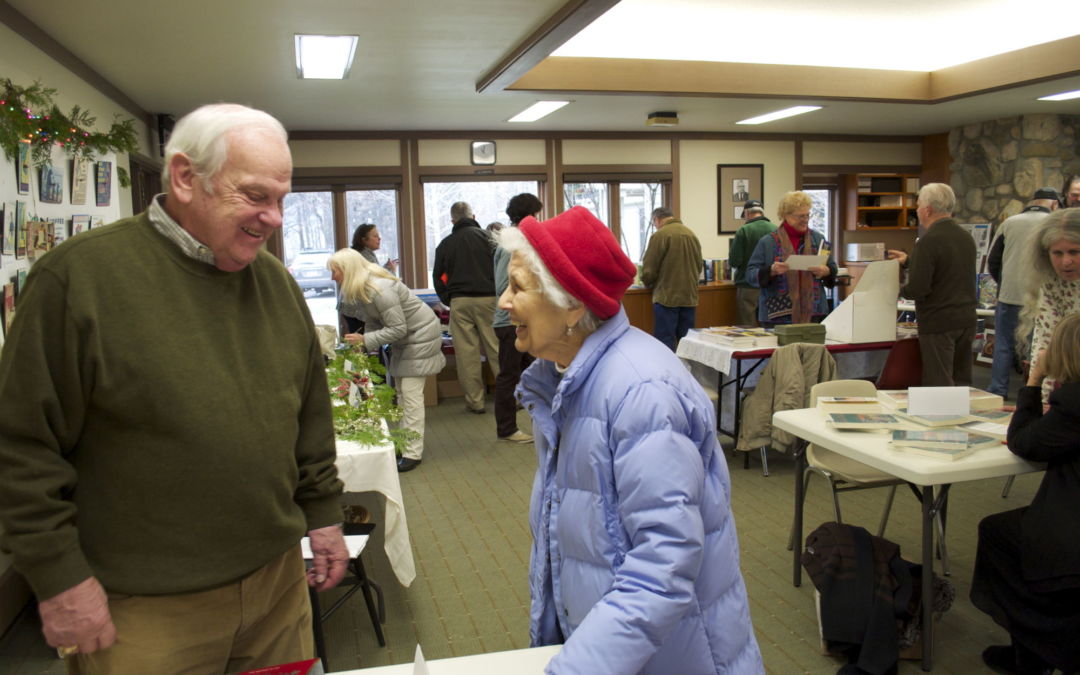 Northern Michigan authors and artists who will be exhibiting, autographing and selling their works include: 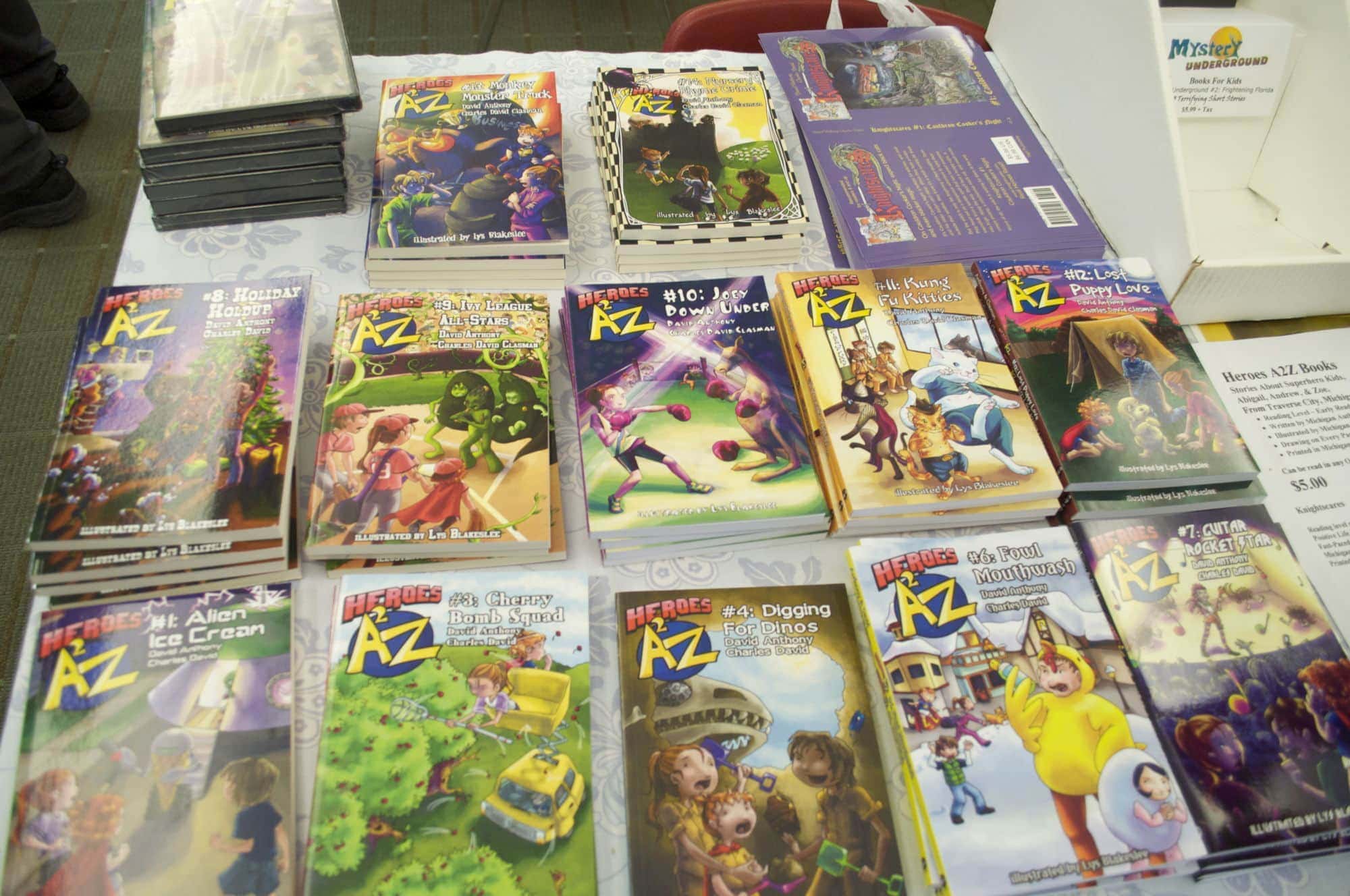 “Heroes A2Z” and “Knightscares” are popular series that are perfect gifts for young readers.

Kate Bassett’s Words and their Meaning, published Fall 2014 received a starred review in School Library Journal. “Bassett’s debut novel scores a hat-trick of literary merit in a strongly crafted and complex plot, deeply drawn characters with palpable grief, and beautifully woven and rich prose.”  Bassett lives in Harbors Springs “in a house that’s only one door away from my parents and backs up to 110 acres of woods. Where fairies live. For real.”

In the wake of Scott Craig’s successful 2013 book, Scott Craig’s The Story Next Door, comes a new audio CD with ten brand new stories taken from his popular radio series heard monthly on Interlochen Public Radio.  Now, you can listen to Craig’s tales as he reads them out loud. Award-winning television documentary producer Craig will have copies of both his book and his audio-book for gift-giving at the Northern Michigan Authors & Artists Expo.

Duck Soup, a five-person Northern Michigan bluegrass, roots and folk band, will offer a variety of songs and humor. Duck Soup will have you wondering what’s next on the menu and begging for more. Beautiful harmonies.  Acoustic instruments abound including, guitar, banjo, mandolin, fiddle, autoharp, ukulele, upright bass and more. With two recording projects to their credit, they have played venues from ski resorts to bluegrass festivals. Duck Soup is from Cadillac Michigan and have been together for nearly 15 years.

Mardi Link’s memoir, Bootstrapper: From Broke to Badass on a Northern Michigan Farm received this review from Garrison Keillor, “A heroic-comic saga of single motherhood, pure stubbornness, and the loyalty of three young sons. And more than that, an honest account of the working poor, the people who buy day-old bread, patronize libraries and don’t need your sympathy. Just a break now and then.”

Artist Kris Love has been making up pictures since early childhood. Growing up in Texas and now living in Michigan, Love is influenced by the imagery and environments of both places. Paintings are based on nature, but mixed up. The landscapes are often imaginary, and the animals and plants don’t always come from the same continent.  One of her paintings was chosen for the 2014 Leland Wine & Food Festival Poster.

Pediatrician, mother and best-selling author of six books, Dr. Meg Meeker is the country’s leading authority on parenting, teens and children’s health.  Her newest book, Strong Mothers, Strong Sons offers a road map to help mothers find the strength and confidence to raise extraordinary sons by providing encouragement, education, and practical advice. Dr. Meeker lives and works in Traverse City, MI where she shares a medical practice with her husband.

Loreen Niewenhuis grew up in Michigan and has lived there most of her life. Loreen recently completed her third 1,000-Mile Great Lakes Adventure. This time she explored many of the islands of the Great Lakes. The book about this journey will be released in 2015 and will be titled A 1,000 Mile Great Lakes Island Adventure.

Cari Noga is a writer, reader, mother, bicyclist and wine lover – sometimes up to four out of the five all at once. After aspiring to write fiction for many years, she wrote her first novel, Sparrow Migrations, as part of National Novel Writing Month in 2010.  Publishers Weekly describes the novel as, “brimming with humanity and grace.”

Lynne Rae Perkins was awarded the Newbery Medal for the young adult book Criss Cross. In her most recent work, the funny and moving novel, Nuts to You, two squirrels go very far indeed to save a friend who has been snatched up by a hawk. Nuts to You is short, funny, and surprising—an Incredible Journey with squirrels.

Ken Scott’s photography is the result of 20+ years “experimence” with “lots of patience … recognizing the right place at the right time, but not necessarily for the intended image.”  This past winter, Scott braved the weather to capture Leelanau’s rare and magnificent ice caves. His newest book, Ice Caves of Leelanau, documents spectacular ice formations in early winter, and after a March thaw and re-freeze.  Ken will also have other photographs available at the Expo.

Doug Stanton is the author of the New York Times bestseller In Harm’s Way: The Sinking of the USS Indianapolis and the Extraordinary Story of Its Survivors.  A former contributing editor at Esquire, Sports Afield and Outside, Stanton is now a contributing editor at Men’s Journal and has written on travel, entertainment, and adventure. Stanton lives in his hometown of Traverse City, Michigan, where he is a member of the advisory board of the Interlochen Center for the Arts’ Motion Picture Arts Program and a trustee of the Pathfinder School.

A.V. Walters was born in Canada, to American parents. (And after thirty years in California, she no longer says ‘eh’ at the end of her sentences.) Several years ago she moved to a chicken farm in Sonoma County, where she began writing and became an advocate of “bucket farming.” Her debut novel, The Emma Caites Way, won the BAIPA Best Literary Fiction Award. Her newest book, The Gift of Guylaine Claire, a nod to her Canadian roots, was released July 1, 2012 by Two Rock Press. She now calls Cedar home.

Library staff recommend arriving early to have the most access to the Northern Michigan authors and artists. The event will be held in the Munnecke Room of the Leland Library and is also the same day as the Merry Marketplace at the Old Art Building in Leland. For further information, please contact Sylvia Merz, Library Director at (231) 256-9152.