The Northwest Michigan Surgery Center, a Northern Michigan healthcare provider, is a state-of-the-art, 42,0000-square-foot outpatient surgery center, based in Traverse City, and now the largest of its kind in Michigan. It was built a decade ago to ease the challenges of outpatient surgery for both patients and physicians, a mission even more critical today.

Traditionally, outpatient surgical procedures were performed in a hospital setting, but the situation can be complicated for patients and physicians, alike. If a doctor is abruptly called away to an emergency in another part of the hospital, the wait-time for an outpatient procedure can spread to hours. 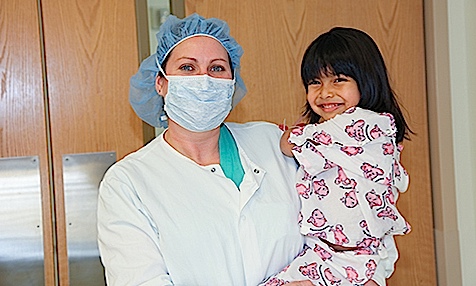 In an effort to simplify this complex system, a group of Traverse City physicians teamed up to open the Northwest Michigan Surgery Center. The aim was to provide high-quality, cost-effective and accessible care for patients, while also allowing better efficiency for physicians. (Fifty-one percent of the center is owned by the physicians, and the other 49 percent is owned by Munson Healthcare—freeing up the latter to focus on inpatient care.) The outpatient surgery center is staffed by 73 board-certified procedural physicians, 21 certified registered nurse anesthetists and 40 anesthesiologists credentialed to work there, and an employee healthcare staff of more than 120.

There are now more than 5,000 such facilities in the U.S. performing some 23 million surgeries annually. Northwest Michigan Surgery Center sees 19,000 patients each year for procedures related to gastroenterology, ophthalmology, gynecology, urology, orthopedics, plastic surgery, podiatric and hand surgery, and even dentistry.

The center prides itself on providing increased accessibility for its patients, who don’t have to navigate multiple floors and wings as they would in a hospital setting. But the main way in which the center differs from a hospital is that it does not have an emergency room or intensive care units, which keeps overhead costs low and passes those savings along to patients. This increased affordability is a critical aspect to the center’s mission, Vande Leest says. Generally, people pay about 30 to 40 percent less than they would for the same procedure performed at a hospital. But for Medicare and Medicaid patients, the savings are even greater: the surgery center averages six million dollars in Medicare and Medicaid copay savings per year.

“Medicare and Medicaid—that’s where we really save money for everyone,” Vande Leest says. “The hospital has one price structure with Medicare and we have another. We make 40 percent less. If you come here, for example, to have your colonoscopy and you’re of Medicare age, we get paid 40 percent less than the hospital does. It’s a savings for every taxpayer out there.”

In addition to helping patients save money, Northwest Michigan Surgery Center also makes an impact in the region by donating services to those, in certain cases, who cannot afford to pay. In 2013, the surgery center totaled $200,000 in Medicaid and charity care.

Another key aspect to Northwest Michigan Surgery Center’s success is the organization’s dedication to staying on the cutting edge of health care. Because it serves seven counties Up North, the center takes its role as a regional leader in healthcare very seriously. “We really do try to be innovators,” Vande Leest says. “We are always looking for the next thing that’s coming down the pipe that we can get here to help people.” The center’s board of physician-owners acts as a team when deciding when and how to incorporate new procedures and technology.

When one of the physicians wants to bring in a new piece of medical equipment, for example, she must first make a case for it in front of the board before it can be brought in for trial. “We ask, ‘What does this do to benefit the community? What does this do to benefit the center? Where does it fit in the big plan?’” Vande Leest says. Recent advancements include brand-new colonoscopes and endoscopes, purchases totaling a quarter of a million dollars, and a half-million-dollar, state-of-the-art laser that can perform exquisitely fine incisions and correct astigmatism during cataract surgery. The center is also undergoing an interior redesign that will maximize the use of its existing space, allowing for the addition of two more operating rooms to its existing six.

The occasion of the center’s 10th anniversary in 2014 brought a chance to reflect on how far it has come, how it is serving the region, and how it can continue to evolve in order to be a health care trailblazer in northwest Michigan. Vande Leest says Northwest Michigan Surgery Center is extremely proud of its daily efforts to provide a dependable alternative for quality care in Northern Michigan. “When you read our satisfaction surveys and talk those who’ve been here, our patients are so happy to have come here and to be treated the way they are treated,” she says. “Our employees really care. In our business, it’s all about the people.”