Their pasture awash in the late fall sun, Rick and Sue Duerksen are greeted by a synchronized cacophony of gobbles and clucks as their flock of Nicholas turkeys waddles forward anticipating lunch. The birds are fat and  happy, having spent the last 12 weeks feasting on grain and pecking at curated grasses on  the Duerksens’ verdant acreage above the Jordan River Valley in Mancelona.

Begun as a commercial breeding operation when the couple purchased the farm in 1979, Duerksen Turkey Farm was reimagined in 2007 as the farm-to-table movement gained traction, and Rick and Sue saw the opportunity to offer natural, pasture-raised poultry to Northern Michigan consumers. The Duerksens repopulated their flock in 2007 with 200 fluffy poults transported in the family mini-van from a breeder in West Michigan. Since the Thanksgiving that followed Rick and Sue have continuously increased production to meet demand, raising and processing 4,000 birds in 2014, making Duerksen Michigan’s largest, year-round pasture-raised turkey farm.

With the turkey’s existential holiday fast approaching, we dive into life at the Duerksen farm to learn about the provenance and preparation of their toothsome turkeys and understand how Northern Michigan’s local food movement empowers the livelihoods of small farmers and teaches us all to eat better.

“You can see our toms already starting to strut,” Rick says as several male members of Duerksen’s clucking congregation of broad-breasted whites fan their tan feathers and preen for an audience of several hundred hens. These turkeys are 16 weeks old and pushing 30 pounds, nearly optimal weight for their inevitable transition from pasture to plate. “We typically send the birds out to pasture full time once they’re 10 to 11 weeks old and no longer a target for predators,” Rick explains.

Unlike their obese factory-farmed cousins, these birds are healthy and unencumbered, running through 12 acres of fenced pasture the Duerksens have planted with rye grass, alfalfa and red clover to supplement the birds’ mineral-enriched grain diet. Electrified strands keep out coyotes, and the enclosure harbors mobile shelters as well as food and watering stations that Rick routinely moves to keep the birds over fresh grass. “Explaining this system to our customers has really shaped the success of our business,” Sue says of defining “natural and pasture-raised” to the hundreds of farmers market attendees and wholesale customers the couple sells to every week. “ ‘Free range’ only means that a farmed bird has access to the outdoors; our birds live on the pasture, eat a natural vegetarian diet and are never exposed to antibiotics or growth hormones.
You can tell by the feathers,” Rick illustrates, expertly grabbing a fat hen and showing off the bird’s healthy sheen.

While the natural, intuitive husbandry of these animals is its own job, getting them to market has taken heroic grassroots entrepreneurship on the part of the Duerksens, who slaughter, package and sell every pound themselves. Attending six separate farmers markets every week from Traverse City to Harbor Springs, Rick and Sue load hundreds of pounds of fresh or freshly frozen breasts, thighs and legs into coolers along with 16 varieties of prepared turkey products like smoked legs, jerky, bratwurst and turkey breakfast sausage, to name a few. These same products, along with whole and cut-up birds are also sold through natural food co-ops like Oryana in Traverse City or to independent restaurants and retailers via distribution partners like Cherry Capital Foods.

Turkeys for the farm’s fresh and freshly frozen are slaughtered weekly and packed in the farm’s immaculately clean on-site processing facility by the Duerksens and one part-time helper, but the processed meats are made in conjunction with Ebels, a USDA processing facility south of Lake City. Rick routinely leaves the farm at three a.m. with a truckload of live turkeys who are butchered at a USDA slaughterhouse in Lansing, while he makes deliveries to wholesale customers in Ann Arbor and South Lyon before driving back north to drop off the would-be turkey jerky at Ebels and finally finding himself home for dinner some 18 hours later.

In addition to being farmers and entrepreneurs, Rick drives a school bus and coaches basketball at Mancelona Public Schools, while Sue cleans houses three to four days a week, an exhausting duality that is nearly finished thanks to Michigan’s insatiable appetite for Duerksen turkey. “We want the farm to be totally sustaining us, but there are only so many hours in the day,” Sue muses sitting at her farmhouse table. “Even though 80 percent of our business has become wholesale, we really value the one-on-one interactions at the farmers markets. It’s important for the buyer to know the farmer, to understand who we are and how we raise our birds.” 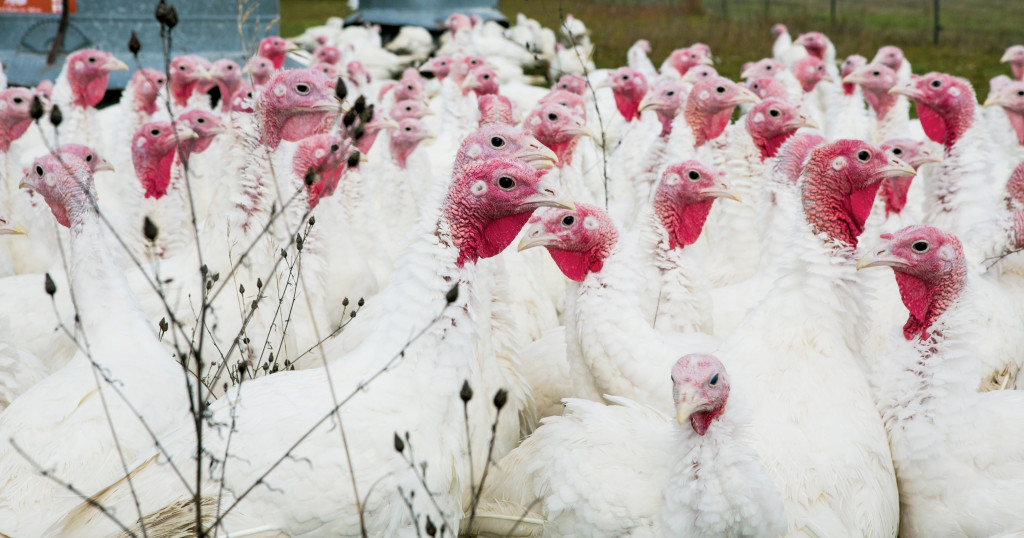 How the Duerksens raise their birds double-delivers: it realizes the couple’s impassioned ethic of natural husbandry and puts a healthier and better tasting turkey on thousands of Michigan tables. Even though 60 percent of the Duerksen flock is sold as fresh whole turkeys at Thanksgiving, the farmers are quick to point out that the bird’s delicious utility goes far beyond its designated holiday. “We’re glad the turkey has its day,” Sue explains, “and since the turkey is the centerpiece of your Thanksgiving or Christmas meal it’s worth getting it right, but a lot of people don’t realize how versatile this product is. Pasture-raised turkey is high in omega-3 fatty acids, contains very little fat and cholesterol and can be used in almost any preparation.”

The Duerksens recommend using boneless, skinless turkey breast as a substitute for chicken: marinated and grilled, lightly dredged and sautéed or cut up for stir-fry. The family often crafts flavorful turkey burgers, adding grated zucchini or torn spinach and fresh herbs along with feta cheese to add moisture to the lean, healthy meat. When tackling large cuts like a bone-in breast or active muscles like legs or wings, Sue stresses the necessity of a “low and slow” cooking approach. “People often make the mistake of assuming that cooking turkey is like cooking chicken, but in fact it takes a lot longer,” Sue instructs. “Using a meat thermometer will help you be precise when cooking a whole breast; legs need to be braised for at least six to eight hours.”

Asked if he ever gets tired of eating turkey, Rick laughs, but replies with a confident, “No. But we have a lot of ways to eat it. Between the sausages, burgers, barbecue pulled turkey, the smoked products and the fresh, it never gets old.”

As the afternoon winds down, the Duerksens set about their evening chores, checking in on 500 young poults, “Christmas dinners,” as Rick calls them, before tackling some finish carpentry on the new slaughterhouse. In a few short weeks this facility will be running at maximum capacity with Rick, Sue and a team of eight seasonal helpers butchering and packaging whole birds 18 hours a day to fill several thousand retail orders for fresh Thanksgiving turkeys.

At $3.65 per pound, a fresh, naturally raised Duerksen bird costs considerably more than its chemically accelerated, saline-injected grocery store counterpart, but that isn’t stopping anyone. “The demand has become incredible,” Rick asserts. “We couldn’t sell another turkey at Thanksgiving if we wanted to.” In spite of the hurdles imposed by industrial agriculture and the scarcity of loans for small farmers, the passion and commitment of Rick and Sue Duerksen and dozens of other family farms around Northern Michigan is propelling a local food movement that values quality over commodity and demands responsible stewardship for the land that feeds us.

“Our customers support us because they’re appreciative of the product and grateful for the way it’s raised. That’s what helps us to get up at three in the morning,” Sue Duerksen says, and we believe her.