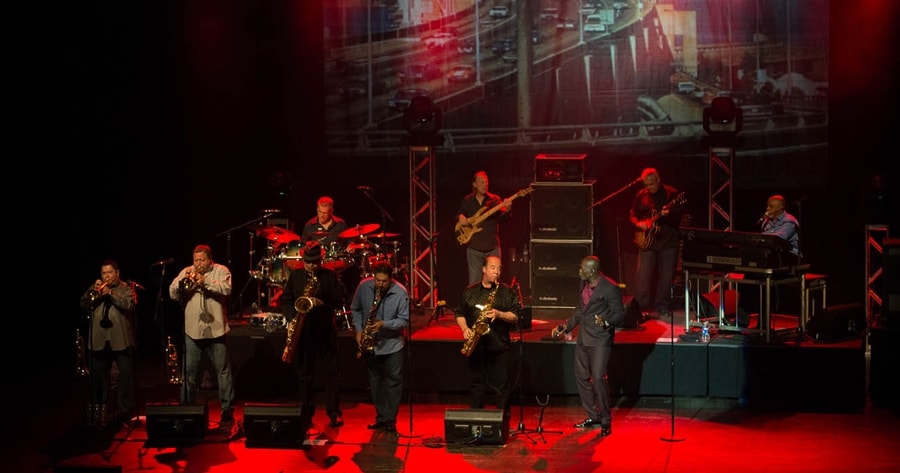 For over 40 years, the Tower of Power has been synonymous with groove, soul, and the hottest horns on the planet. Wherever the band performs, fans come out of the woodwork to hear the five-piece horn section play as one, while the rhythm section keeps the groove going. Stirring it all are the strutting vocals from some of the best singers on the planet.

If that sounds like hyperbole, then ask any musician friend. They’ll set you straight. “Having been in Tower of Power looks pretty good on your resume,” agreed saxophonist and occasional vocalist Emilio Castillo. Castillo formed the band with fellow sax player Stephen “Doc” Kupka in 1967.

Not many bands can claim the longevity of Tower of Power. The Moody Blues, Rolling Stones and Yes are about the only ones that come to mind, having gotten their start in the 60s and still working the crowds today. And none have also backed acts as varied as Santana, Little Feat, Huey Lewis and Elton John.

What has kept the band going for more than 40 years? “It’s the greatest gig in the world,” said Castillo. The night before this interview, Castillo and company played BB King’s in New York, a date he said was magical. “The place was packed, and the band was clicking. When I say it was clicking it was really as good as we’ve been playing. We had our former lead singer Tom Bowes sit in for a couple tunes, and our former sax player Lenny Pickett was there.”

With more than four decades of recording and touring dates, Bowes and Pickett are among a cadre of former members. The band has had over 20 horn players and more than a dozen players have held forth in the rhythm section. “I hate changing guys,” said Castillo. “I want them to stay forever.” That said, he agrees that new people give the band a new energy. “It’s always exciting when someone new comes in,” he said. That includes Ray Green, the band’s newest member and its 11th lead vocalist. “He’s really soulful and exciting,” said Castillo. Not only does he sing, he also plays trombone, and Castillo compares him to onetime Crusaders trombonist Wayne Henderson.

Castillo says another reason for TOP’s continued relevance is the fact the band knows what it does and does it well. “We don’t chase trends. We’re gonna make the most soulful music we can make. We learned years ago when we stay true to ourselves the fans will love it,” he said. Despite a lack of big hits over the years, Tower still has a number of tunes the fans expect to hear: “Only So Much Oil in the Ground,” “Willing to Learn,” “You’re Still a Young Man,” “Down to the Nightclub,” and the band’s two signature tunes, “What is Hip?” and “So Very Hard to Go.”

The band hasn’t added to that list in a few years, as it hasn’t’ made a new original album since The Oakland Zone in 2003. The Great American Soulbook in 2009 focused on tunes by past soul masters; 40th Anniversary a year later was a live recording featuring numerous past members; and the most recent release, Hipper Than Hip: Yesterday, Today and Tomorrow, is a scintillating live date from 1974. It features Lenny Williams, considered by many the band’s pre-eminent singer. “I forgot just how good he was. His singing was stellar, and he was so comfortable off the cuff,” said Castillo.

Castillo promises that lack of new material will change. He’s working on a new recording with Gino Vanelli’s brother, keyboardist Joe Vanelli. “We’re cutting 45 songs. We want to get the best 12. I want to make this the best record we’ve ever made,” he said.

One well-regarded former singer that wasn’t available for the 40th anniversary was Rick Stevens. The band’s second vocalist was sentenced to life in prison for murder in 1976, three years after he’d left the band. He was paroled in 2012. “That’s God in action. He’s a changed man,” said Castillo. Castillo says he was initially skeptical of Stevens’s conversion, but has since come to believe his sincerity.

With all that going on, Tower of Power is still one of the original road warriors, touring constantly. The show at Manistee’s Little River Casino is part of a series of dates that finds the band criss-crossing the country, from California to New Hampshire to the Midwest. Unfortunately tickets are sold out for this event.

The Hunt for the Reds of October on the Leelanau Peninsula