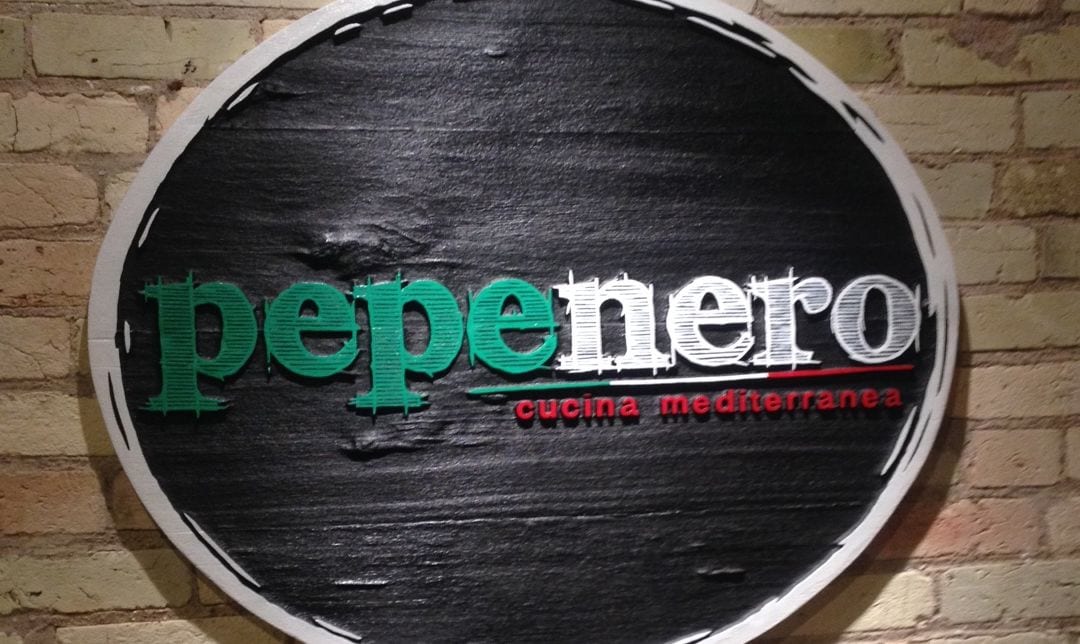 He was an 8-year-old working in his uncle’s trattoria in Palermo, Italy, when Giorgio Lo Greco decided that one day he was going to open a restaurant of his own. Now, a few decades later (a gentleman never reveals his age) he and his wife, Monica, are the proud owners of Pepenero, an Italian Traverse City restaurant located in the Mercato at the Grand Traverse Commons.

“Our vision was to open a restaurant that will resemble one on the streets of Palermo, Italy: a place that we will frequent ourselves: intimate, laid back usually buzzing with conversations and people enjoying freshly cooked real Italian food matched with excellent wines and genuine service,” Monica said.

They initially opened their doors in the summer of 2013 but they didn’t obtain their liquor license until the spring of 2014. Since then, business has been good and customers keep coming back for more. Upon entering, a first time customer usually has one burning question, “what does Pepenero mean?”

“Choosing the name was a little challenging because we wanted a name was that was appropriate and also good for the people to remember and pronounce,” Giorgio said. “We had some names in mind and we asked a friend of the family about the pronunciation and which one was easy to remember and we came out with pepenero which means “black pepper.”

Pepenero’s cuisine is as Italian as Giorgio. “I am a hundred percent from my little toe to my head,” he says. He pulls inspiration from the formative years of his life that he spent in his uncle’s trattoria and uses his own childhood recipes to create dishes that are fresh and authentically Sicilian.

“Most of my recipes come from my childhood and my experiences working close to my grandma and my mom,” he said. “Of course also working at my uncle’s trattoria, (Trattoria Don Ci Ciccio) taught me things. It is pretty famous back in Sicily because it has been there more than 65 years.”

For Giorgio growing up in a restaurant environment is a strong family tradition.

“It’s not only myself, all my cousins, we all grew up in my uncle’s trattoria and we all started when we were little kids,” he said. “Let’s say we are bussing tables and then our careers went to the dishwasher and then eventually I got to start helping prepare recipes when I was about 8.”

Although they now live in Traverse City, Giorgio and his wife, Monica are originally both from Europe. Giorgio is from Sicily and Monica is originally from Romania. The two met while they were both working on a cruise ship about ten years ago, but after traveling the world together the decision to move to Traverse City was an easy one.

“I worked on the Princess Cruise for 14 years and we have traveled the world. And I have to say that there’s not many people who have traveled more than me and can say that this is a nice place,” he said. “I have seen the world, and I have been all over the world, and I was amazed to find out on the ship, 80% of our guests were American and from this 80% at least 60% they knew where Traverse City is. That means that this place is very special and it made me choose if I hadn’t decided already to stop here.”

“I have a friend in Traverse City that introduced me to the town and then during the years I have been coming to Traverse City in the busier seasons and you know I start to love the place. Then Monica came in the picture and one of the first things I did before I bought a house here was I showed her Traverse City to see if she liked it,” he said. “She loved it, with one condition. In order to live here she wanted a house by the lake. We achieved this goal and three years ago we got the green card and then finally we moved here.”

Now that he lives here, Giorgio said that he gets a lot of questions about his accent (“I don’t even have an accent,” he jokes.) 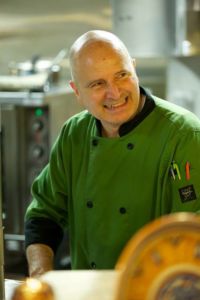 “Because of the accent, the people they question me a lot. And I have to say that most of them we have become friends. This place is a family place,” he says. “What we like about this place is that people come in and they know each other already and it’s like a big growing family right now.”

This family environment is impossible to ignore when you’re having a meal in this Traverse City restaurant. The space itself isn’t large, only seating about 40 guests including hallway seating or the “garden view” as Giorgio calls it. The kitchen is open which adds to the charm of the place, it’s easy to watch Chef Giorgio and his sous chef cook your meal, especially while sitting at the bar. He’s charismatic (and not very shy) and even when it’s busy still manages to sing loudly in Italian from the kitchen. His wife Monica is the graphic designer behind the Pepenero brand, runs the business side of things and is usually behind the bar at the ready with a wine suggestion or a coffee. The wait staff is friendly, professional and knowledgeable. It’s an authentic Italian restaurant right down to the movie posters that decorate the walls.

“As you can see these are all the movies from the ’60s. Most of the people in these posters are very famous Italian actors,” he says. “The decor is typical of an Italian restaurant actually. It’s not just about the posters, it’s about all of it together.”

Hospitality is a huge part of the restaurant as well as staying true to Sicilian traditions. This goes hand in hand with their policy on bread and butter.

“We do not serve bread before the meal because nobody gets bread before their meal in Italy,” he says. “In the long run you enjoy more of the food instead of filling up with bread and butter right before the meal. We don’t even know what is butter in Sicily. If you ask my mom, ‘can I have some butter?’ she would look at you like you were an alien. Also I have to say that we use a great quality of olive oil which is the best that you can find in the market. It comes from Sicily and it’s very tasteful and just a little teaspoon of olive oil is good enough to enunciate all the flavor that you find in the food.”

His passion for cooking shines through in his dishes and he says that he has enjoyed running Pepenero. He credits loyal customers to the restaurant’s success.

“I have to say thanks to all these local people because they have really enjoyed staying with us and of course they make friends in the place with other people there. The charisma of the place is that it’s a small place, it’s cozy and it’s easy to interact with other guests. They love it because of the small place and people.”

Entice your tastebuds by reading the menu, check out the Facebook page for specials or reserve a table by calling: 231.929.1960.

Shopping at The Village at Grand Traverse Commons

Restaurants at The Village at Grand Traverse Commons