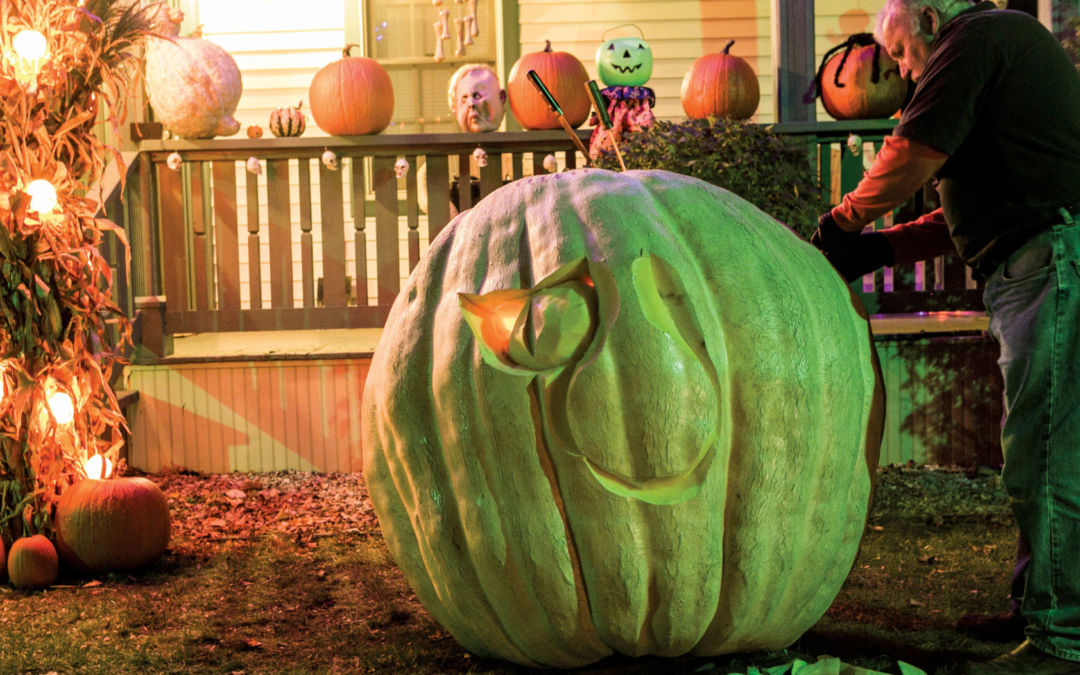 This article was originally published in the October 2014 issue of Traverse, Northern Michigan’s Magazine. Learn all about the man behind the carved pumpkins, Ed Moody.

It started simply enough: a man wanted to carve a pumpkin chariot like Cinderella’s … then things got a little weird.

Come October in Frankfort, there is no doubt which house belongs to pumpkin carver Ed Moody—722 Leelanau Street is to Halloween what the North Pole is to Christmas.

The same way that Santa is available to hopeful children throughout December, Moody can be found in his yard at all times of the day and night through October. Giant pumpkins in varying states of completion surround him in a comedic lineup.

While the giant pumpkins are certainly the main attraction, the steady stream of gawkers whose cars crawl by Moody’s house have plenty of other spangles and flourishes on which to feast their fascination. Lights lace around the house, and smaller pumpkins line the railing of the front porch. Every manner of spook haunts this yard, while ghouls and ghosts fly overhead, ominously “wooooooooing” at anyone who passes. 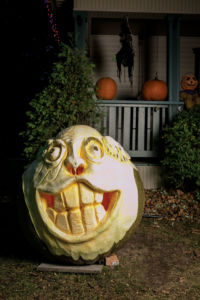 Ed Moody spends significant portions of his day talking pumpkins with the people who stop their cars and get out for a closer look. Ed’s wife, Ingrid, accustomed to the attention, seems to have mistaken me for one of these casual tourists on a brisk afternoon in October, just a couple of days before The Big Day. She bustles about, paying me no mind until I ask for Ed, then assures me he’ll be back soon. I’m left admiring the spectacles all around.

Moody appears dressed in jeans and a pumpkin-colored polo with a dark green long-sleeved shirt underneath. After realizing I’m here for our appointment, he leads me into the house, so we can sit at a table draped in a jack-o-lantern-patterned cloth and talk all things pumpkin.

Moody’s encyclopedic knowledge is on display as he lists off weights of various world records, describes shipping two tons of pumpkin to Hawaii, and talks about where and by whom these mammoths are being grown. His excitement about pumpkins is eclipsed only when we begin to discuss the art of carving.
“The pumpkin dictates—that’s why they call me ‘Pumpkin Ed,’ because I talk to pumpkins and they talk back,” he says. “I deal with the colors, because there are different veins of color in there, and pumpkins aren’t smooth inside. They have cracks and thin and thick spots.”

Moody was artistic and enjoyed carving as a kid. A stone bear that he carved when he was in high school sits in his garden. This passion for his current medium developed after he and Ingrid were married, when Moody found himself wanting to make Halloween more special for his stepson and the new baby. Moody created costumes, artistic and involved, and Moody’s face lights up as he describes them, even a quarter-century later.

He began dreaming of carving Cinderella’s carriage from one of the giant pumpkins he’d seen reports of on the news. When he saw the object of his desire along the side of the road, he stopped to inquire after the 590-pound beauty.

At $1 a pound, the price of Moody’s dream was more than he could afford.

He’d been carving smaller pumpkins of up to 100 pounds, and had photos of some of his designs. The pumpkin grower was so impressed, he asked how much Moody could afford to pay—$175—and decided to sell it to him for that amount, as long as Moody carved another pumpkin for the grower and promised to invite him over when the giant was being sculpted.

“So I brought that one home, and another to carve for him,” Pumpkin Ed says. “I carved a snapping turtle out of the one I brought home for him and called him up when I was ready to carve. It took me thirty-one-and-a-half hours to carve that pumpkin because I was afraid of it.

“It was too much money for me, I couldn’t afford it, but it fulfilled a dream,” he says.

Moody later attended his first weigh-off event, where growers compete against each other for the honor of having produced the biggest pumpkin. After carving for the crowd, he purchased three giants to take home, loading up the back of his Ford Ranger pickup with nearly a ton of precious cargo.

“I had the tailgate open, because they wouldn’t quite fit,” he says, “and I tied a rope around [the back one] to keep it from falling out, and I cut a notch in it for the rope to hold it in place. And it was just awesome, and it’s gone crazy since then.”

Moody doesn’t get much sleep between the last weekend of September, when he brings the giant pumpkins home, and Halloween night. His days are spent talking to visitors and carving until 9 p.m., after which he lies down for a couple hours before getting back to work sometime between midnight and 3 a.m. Each pumpkin takes two to four hours to carve—a much faster turnaround than the 31 fearful hours he spent on his first giant.

We’ve moved outside, where Moody returns to work on a serpent-tongued monster. He pulls latex gloves on over bandages that protect injuries he’s assured me aren’t from carving. That’s not to say there have never been pumpkin-related lacerations. Using the latex gloves, in fact, is the silver lining result of a late-night-before-Halloween emergency room trip that resulted in 17 stitches and a couple of scars that stand out against years of nicks, scrapes and cuts—the marks of a carver, but also of someone who has worked with his hands his whole life. After being sewn back together that October 30th years ago, he assured the doctor he would still be carving through the rest of the night. Flustered by his determination to defy her advice, she gave him a handful of latex gloves and sent him on his way. He found he liked the protection the latex provides—pumpkins have a painfully insidious effect on the sensitive skin around the fingernails—and he now buys the gloves by the case.

He meticulously shapes serpent scales as we talk. His gloved hands expertly wield the knife as it cuts into the tough outer skin, then quickly switches directions. With long-practiced fluidity he plucks a triangle of rind from the pumpkin and throws it into the trash bin then brings his knife back to the spot to carefully shape the scale, playing with depth to create the perfect illusion in three dimensions.

Cars slow, people gawk, and Moody tells tales of the times his knives have been stolen—he hopes whoever took them is keeping them nice and sharp—and describes his doctor’s directives after his open-heart surgery the previous June. “I’m great,” he declared. “I’m back to my abnormal self, and I was right away.”
Four days after his surgery, he was released from the hospital, and a week after quadruple bypass, Moody was out pushing his lawnmower. His wife was miffed, but he reassured her—he was not going to hurt himself. His priorities were still sound.

In a portfolio of pumpkin carving accomplishments, Moody is perhaps most proud of working his magic at a USO event in Hawaii. “When I was in the service, my first Christmas away from home was spent in Korea, and Bob Hope, Lola Falana and The Golddiggers, Johnny Bench and Phil Silvers all came over and did a USO show that made me feel more like I was at home,” he says. “I’ve always felt that I owed Bob Hope and those guys for what they did for all of us over there. Unfortunately Bob died before I could partially pay him back, but last year I partially paid it back. I carved a 1,399-pound pumpkin at the Windward Mall in front of 500-plus military families that were also carving small pumpkins, and it was just the most amazing thing. Unreal.”

These opportunities to make people happy are the reason Moody dedicates so much of his time to carving something that will only exist for a short while. Unlike his stone bear, the pumpkins won’t last forever, but the memories he creates will.
Moody has founded a nonprofit organization called Karving for Kids, and hopes to someday spend the whole pumpkin season carving for patients at children’s hospitals. Like the original giant pumpkin, this dream of delighting sick kids with his skills was something that scared him.

“I was really very concerned—for weeks—before I went down (to DeVos Children’s Hospital, in Grand Rapids) the first time. I care for kids so much that I just thought it would tear me up. But it was just the opposite. It was amazingly rewarding. My heart melted when these kids started walking in and had no hair on their heads, had an arm or leg missing, were bandaged up everywhere, on oxygen,” Moody says, his voice turns thick with emotion and his eyes shine with tears. “A smile or a bright eye, it just brought tears to my eyes, and it does now just thinking about it.

“It was so rewarding to give them a few minutes of happiness in exchange for all they’re going through. It’s awesome. There’s nothing better. Life’s too tough, we don’t need to cause problems and if we can make people smile, it’s worth more than any money you could ever, ever have.

“I’m not into it for the money. I love the smiles.”

After cutting into a giant, Moody reaches in and pulls out the skeins of seeds. He saves them, drying them out and sending them back to the growers, who will use them to breed the next generation of pumpkins. The rest of the insides go into garbage bins, and during a typical Halloween season, he will throw away hundreds and hundreds of pounds of pumpkin waste. 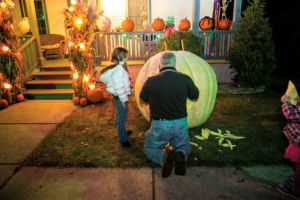 Once inside, there are surprises in store. Ideal growing conditions can yield 50 pounds of pumpkin growth in a single day. However, this isn’t ideal for the structural integrity of the pumpkin, which develops V-shaped fissures inside, which at their thinnest are sometimes only one-quarter inch thick. There are small green masses that grow when this happens, which Moody describes as looking like blood blisters. There are also seams of green that run throughout every pumpkin.

These abnormalities and anomalies are a large part of the secret conversation that Moody has with his pumpkins. They dictate the direction he takes, and the face that will emerge.

And BTW, Moody’s tools for carving are not as sophisticated as one might think when looking at his creations. He alternates between a bird’s beak paring knife, a boning knife and a butcher knife.