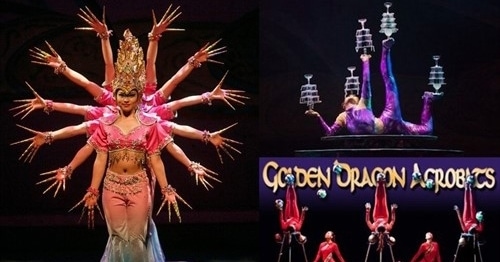 Golden Dragon Acrobats are returning in March 2017! Get showtime and tickets here!

The ancient art of Chinese acrobatics has developed as one of the most popular art forms among the Chinese people, one that has evolved into many forms of performance – including dance, opera, martial arts and sports. The impact of Chinese acrobatics, however, goes far beyond the boundaries of performance, and serves an important role in the cultural exchange between China and Western nations.

The Golden Dragon Acrobats represent the best of a time honored tradition that began more than 25 centuries ago, and are recognized throughout the United States and abroad as the premier Chinese acrobatic touring company of today.

“We are very excited to have the Golden Dragon Acrobats return,” says Gene Jenneman, Museum Director. ”There are still foot prints on the acoustical ceiling panels of Milliken Auditorium from their first performance here and last year’s show had everyone’s heart stopped over the amazing “tower of chairs” act.  I have seen numerous Chinese acrobatic acts at the Performing Arts Fair in Guangzhou, China. This group matches the quality and performing capacity of any acrobatic group I saw there.”

This performance season is made possible at the Dennos Museum Center with support from Arts Midwest, the Robert T and Ruth Haidt Trust, and the Osterlin Performance Endowment with media support from WNMC 90.7 and TV 29&8. Housing for the Golden Dragon Acrobats is provided by Country Inn and Suites.