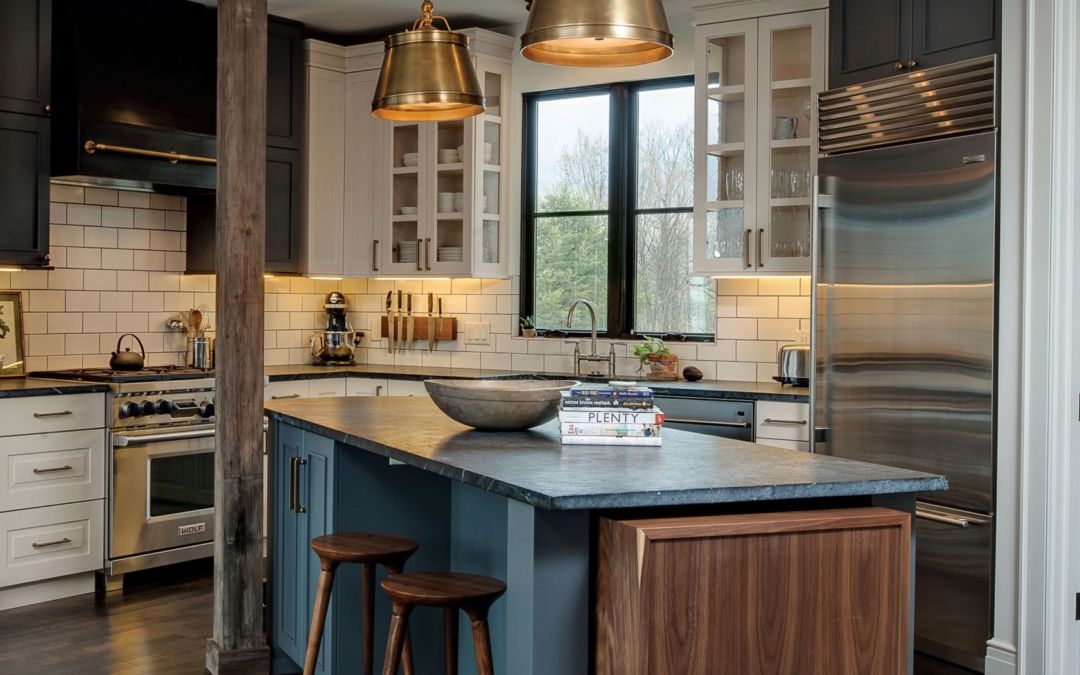 The eighth stop on the 2014 Ultimate Up North Kitchen Tour is located in Traverse City at 2533 Caroll Road. This Old Mission Peninsula kitchen is elegant and modern with added details that will surprise and delight tour goers.

When Dan and Meridith Falconer sat down with us to talk about their kitchen, they’d just flown in from New York, where they’d been on a buying trip for their new store, Wood + Cloth, due to open in Traverse City this fall. They described their vision for Wood + Cloth as a lifestyle store/mercantile—shoppers will find small home furnishings, gifts, linens … those sorts of things.

The store’s aesthetic will be that intriguing mélange of classic-meets-modern items fabricated with natural materials and that imbue everything with an elegantly primitive twist. The look is played out in the Falconers’ kitchen in their new Old Mission Peninsula home, where the couple worked with designer Sandra Bargiel to fine-tune the deets. Rough reclaimed beams, dark-stained hand-scraped birch floor and quarter-paned farmhouse windows with black molding stand out against white walls, gray and white cabinetry and unoiled soapstone counters. A custom-welded black steel stove hood evokes Old World, as does the white-enamel farmhouse sink. The brass pendant lights cast a warm, classic glow. 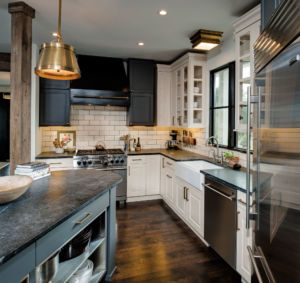 True to its modern soul, this kitchen is also about function that begins at the pantry that connects the garage to the kitchen. Unload the groceries from the car and stash them on your way in. Stainless steel open shelving rolls out from the island in lieu of cupboards, while one end of the island is shaped to nest a stainless condiment cart and the other a wooden cookbook bookcase on casters.

Not a detail was overlooked, style or otherwise: when Sandra realized that the dish cupboards would block the view outside the kitchen window, she had glass set into the cabinet doors AND their sides. Sure enough, you can look straight through them onto some of the most primitively classic design we can think of: the lush Old Mission peninsula landscape.