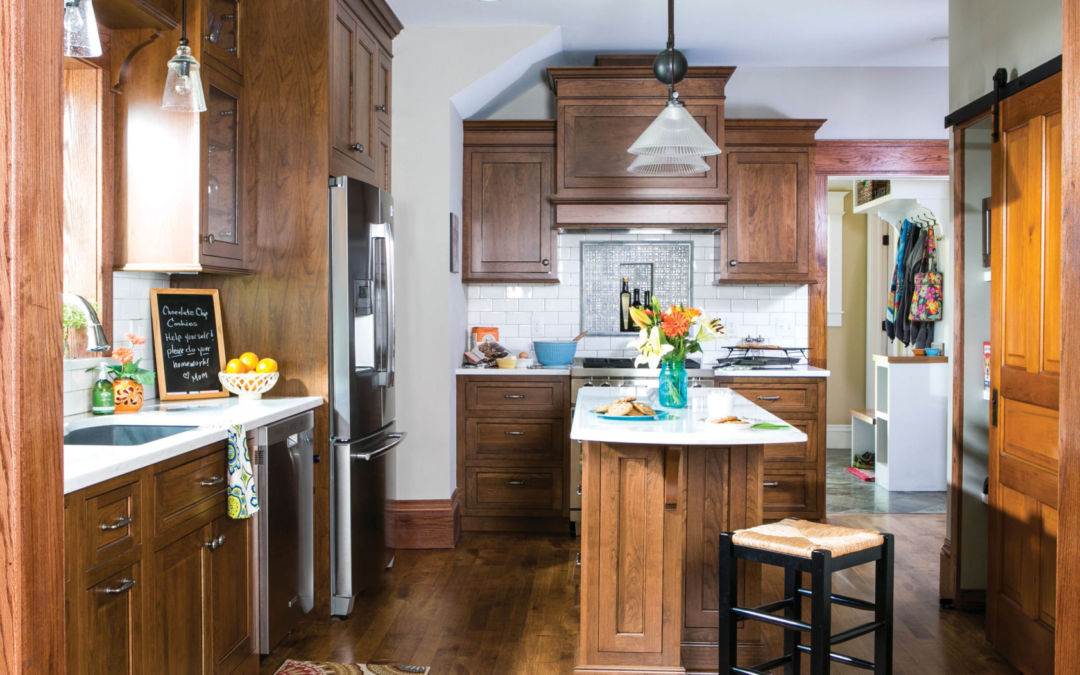 The tenth stop on the 2014 Ultimate Up North Kitchen Tour is located in Traverse City at 501 West 11th Street. The kitchen in this home was remodeled taking the original structure and period pieces of the home into account and the effortless blend from old to new is worth noting.

Back in the early 1900s, when this Painted Lady of Traverse City’s West 11th Street was in her prime, family and friends weren’t given to hanging around the kitchen when the cooking was going on. The woman of the house and/or the hired help were relegated to that cramped, utilitarian room that was almost always cut off from the rest of the home. And so it was that, a century later, this otherwise wonderful home still sported her original doors and woodwork. After the current homeowners moved into the home three years ago, they tried to live with the antiquated kitchen—even painting the walls a lovely hydrangea blue to lighten it. But it didn’t take more than a couple of family get-togethers with their three adult children to see that the kitchen just wasn’t working.

Wary of a kitchen designer who might push them into a remodel not befitting their period home, the homeowners interviewed several before settling on Marty Rhein and his team from BAC Design Group. Rhein began by reconfiguring the kitchen’s work flow—laying out L-shaped cupboards and incorporating a generous island. What had formerly been a dining room off the kitchen became a sitting room—or hearth room as the family calls it—that offers plenty of room for visiting with the cook. 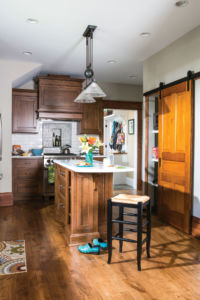 But it is Marty’s attention to period detail in the kitchen that really sets this renovation apart. Cherry cabinets and a distressed maple floor are complemented by a vintage subway-tile backsplash. The custom cherry-trimmed hood appears to be an extension of the cabinetry. The gray-streaked Cambria quartz countertops mimic Carrara marble, and wood-trimmed Kolbe awning windows are stained to match the cabinetry. Details abound: a recessed niche above the stove is inlaid with handmade tile embossed with a classic Victorian pattern; a door from the home’s “parlor” was repurposed for the pantry; and a charming coffee nook is designed to echo an antique corner cupboard. In a touch that still awes the homeowners, BAC team-member Scott Schmidt patched new wood trim into the original trim so perfectly it’s impossible to tell the difference. “He went through piles and piles of wood to match the grain and then blended three different colors of stains. It was pretty ingenious,” the homeowner says.