The Age We Season, an Essay about Fishing in Northern Michigan 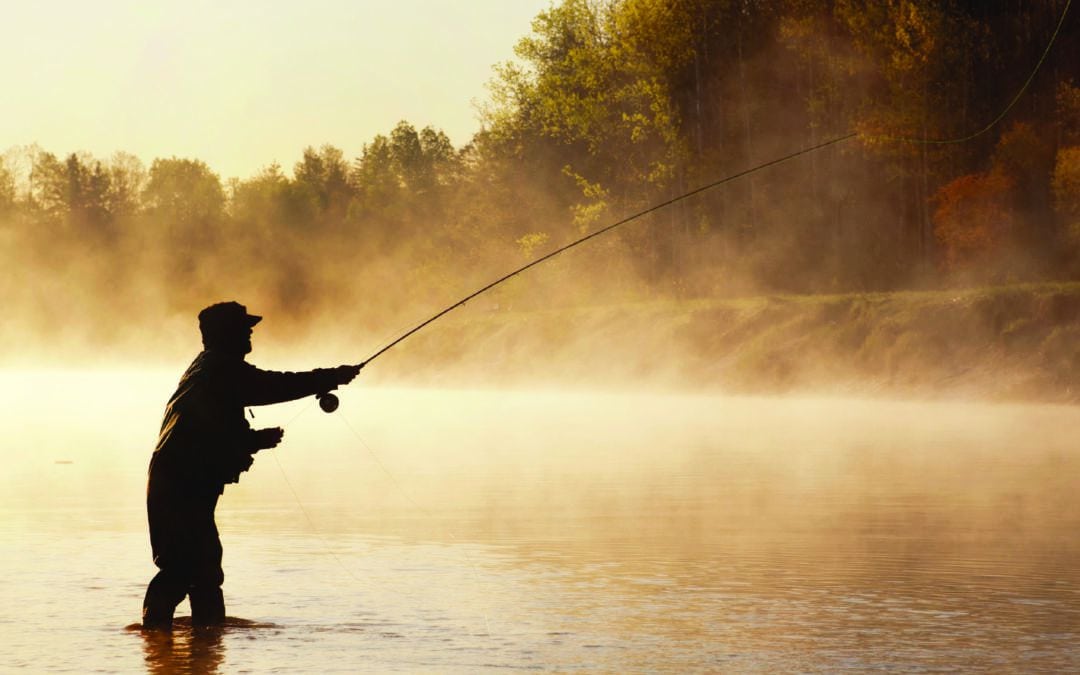 I lumbered through damp birch and bracken fern last August until I had to crash tangled brush to reach the bank of a favorite, tight, trout stream, where I confronted a deep layer of muck between myself and the cold, clear flow where I wanted to be. I fly fish without waders mostly, so stepping through muck would give the leeches that live there the opportunity to attack my legs and feet. Fortunately, three logs crossed over the bank, so I stepped up on the highest and balanced over the muck above the water when my right foot slipped, I wind-milled and dumped on my side, breaking my favorite, handmade rod in three pieces and leaving a grand contusion on my arse that took a month to heal.

It’s moments like these that force me to concede that many facets of my active life are going this way. Despite my contrary fantasies, all evidence points to my physical decline: knee reconstruction and both rotator cuffs repaired, baldness, chubbiness. I look in the mirror and think, How the hell did this happen? and yearn for the magic of a wild and athletic youth that only my inconsistent memory and a few photographs have captured.

Denial is a comforting liar, but lately I’ve tried to accept that my turn will eventually come, just as I watched my father and my longtime fishing partner, George Chatas, age past their abilities to fish. I can still feel the muggy Father’s Day evening years ago during the brown drake hatch on our favorite river. My father and I waded upstream together into the dark toward a sharp bend clogged with tangles. The light faded, and the fishing heated up. It was pitch dark by the time we were to cross the tangles, but as I stepped over the first log, Dad stopped. “You go ahead,” he said, and I realized this was the ironic, bittersweet moment when the son would out-fish the father. Just above the tangles, a deep, flat-water bend pulled away from the bank, where the largest fish fed. I was half-proud and half-sad as I caught larger and larger trout, bringing them downstream to show him. He would not fish this water again, and passed away from pancreatic cancer several years later.

I also can envision the day George could no longer fish the tight stream where we had spent 20 or so seasons taking turns casting. Toward the end, I was his caretaker, holding his hand to help him into the river, over logs and through heavy currents. That day there was a slight breeze as he teetered through the stream, back-casting repeatedly into the tag alders until he accepted his final moments on that stretch of water. He would never return. George took trips to Montana where he cast from a chair, but passed away shortly after my last visit to him. He had been silent all night, and then looked up to me and spoke his final words to me, “Have you been fishing?”

There is a young crew of fishermen in my community now, and I see some of them passing through the phases I did in my teens through my 30s, in which my ego and the incessant pursuit of big fish and photos of big fish melded into stories that had to be shared with other fishermen to bring closure to the catch, presenting to others the evidence that I should be worthy of high status in the fraternity of fishermen.

That desire to impress, the counting of fish, the measuring of inches and pounds and the collection of photographs for others to admire, are all functions of the lower brain, where lust resides and where I lived most of my youth. Night fishing, for example, is lower brained. I called it an Id-man activity. It feels dangerous, and half the thrill came from moments when raccoons fought on branches above my head, bats caught my fly, beavers suddenly splashed their tails like watermelons dropped from 10-story buildings or deer busted out of the brush, snorting. To me, though, it was unsophisticated, simply locating promising runs and holes, dragging big mouse, moth and zoo cougar patterns through the current in pursuit of enormous, aggressive, nocturnal brown trout that attacked with every tooth. I fished like this for decades, deep into the night and most often alone. I have photos. It was a primal experience, and I fed on it.

Then, 15 or so years ago, during the peak night hatch of the summer, the hex hatch, when all the big fish feed, I discovered a half dozen cars by a stretch of stream where in youth I would rarely see anyone. Young guys were on walkie-talkies jogging to the river, trying to stake out the best water. My heart sank, I turned around and drove home, having to accept the times had changed, and so had I.

I am over 40 years a fly fisherman now, having just turned 53 this spring, and in the final phase of the fisherman’s philosophy, however long I may last. If my legs hold out, hopefully and with luck, 25 or more years. Though I still could, I rarely fish the hex hatch, preferring solitude, and haven’t gone out dragging mouse patterns for years.
Now I spend more time in the patient, cerebral zones of my mind, past desire and into a slow, silent appreciation of the glorious, cold-water environments that support brook trout I catch on hand-tied dry flies during the day. I think, who knows how many more generations will experience this.

Sometimes after hours of immersion, I stop fishing and find myself standing for long times watching waxwings catch mayflies, identifying species of butterflies or standing still long enough for deer to pass without noticing me.

Emerson in his journals sketched an enormous eyeball atop a body, the “transparent eyeball” that became an integral image in his essay, “Nature.” He describes moments like these in which “all mean egotism vanishes. I become a transparent eye-ball; I am nothing; I see all …”

It’s January, and I had my first fishing dream of the winter last night. I was alone, casting sensuously into a swirling current. Such visions, such ethereal moments. They come to me more often now, urging me to accept that I am where I belong.

Tips for Fishing in Northern Michigan