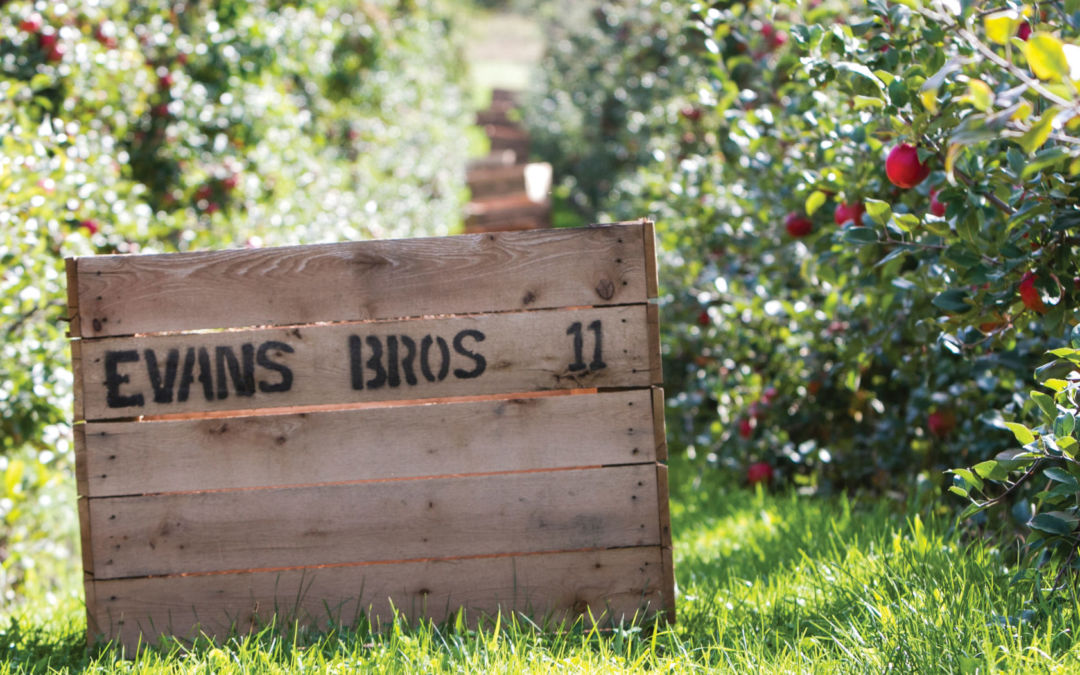 The Honeycrisp apple was born in Minnesota, but two Northern Michigan growers proved that our region is the variety’s Eden.

This story was featured in the September 2014 issue of Traverse, Northern Michigan’s Magazine. Get your copy.

You wouldn’t peg Mark Evans as a gambler. I meet this unassuming man on a balmy, dry September afternoon. He is driving his father’s sun-faded, blue Ford 6600 tractor along a row of apple trees. He deftly hops down, offering a firm, tanned handshake. His dress code is decidedly business casual for a company executive—unbuttoned flannel shirt over a black tee, Levi’s jeans, waterproof work boots, and a camo-patterned Farm Bureau Credit Union ball cap pulled over salt-and-pepper hair. Mark is one of the two men who make up Evans Brothers Fruit Company, a fourth-generation family farm tucked in a bucolic Benzie County valley south of Frankfort. Mark and his brother Mike’s big gamble? In the early 1990s, they planted an orchard of a little-known apple variety called Honeycrisp.

Today you would hardly call the Honeycrisp a gamble. Its distinctive crunch and texture combined with burst of sweetness makes it a favored apple at every farm market stand, specialty food store and grocery chain. Otherwise price-savvy shoppers fork over up to triple the cost of other varieties for this apple. And its red and yellow skin glows in comparison to its apple brethren.

It wasn’t always this way, according to Mark. It was a risk in 1993 when they became the first farm in Northern Michigan to plant it. 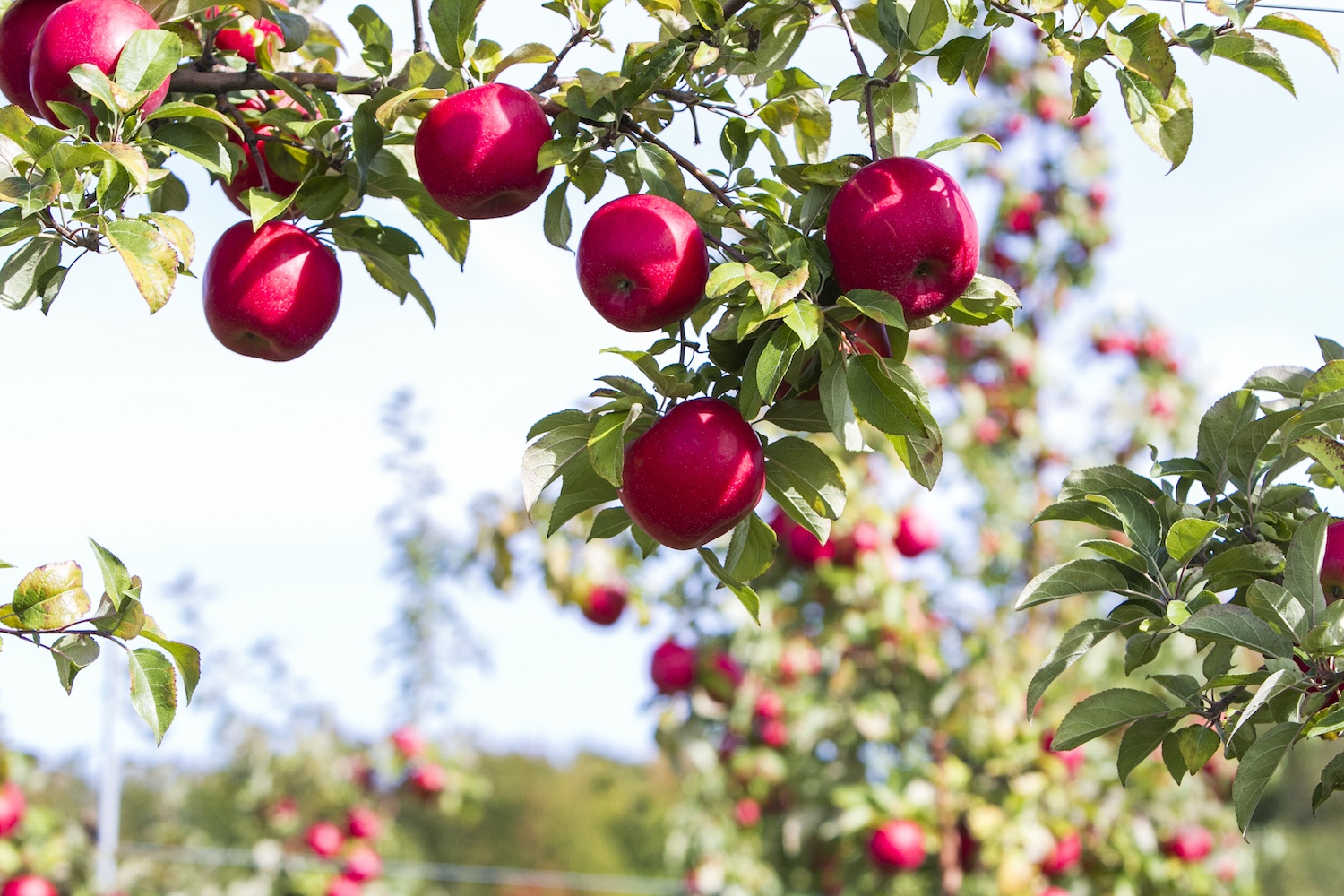 Mark recalls how he and Mike went to a local growers conference in Manistee in 1992, where an East Coast professor did a presentation about some new apple varieties, including the Honeycrisp from the University of Minnesota. A year later, on a trip to New Zealand, the brothers had an epiphany when they saw how the country’s consistently sunny climate generated a year-round bumper crop of produce—what if they could grow something that benefited from Northern Michigan’s unique climate? It was time to give that obscure apple variety from the University of Minnesota a try.

The Honeycrisp wasn’t a sure bet when it was first introduced. Even the University of Minnesota didn’t know what it had on its hands, allowing anyone to grow the fruit by paying just a small royalty, rather than holding the patent and carefully controlling the grower permission, like with the recent apple phenom the SweeTango®. The first problem with the Honeycrisp was the color. Customers expected their apples to look—well, like apples. Solid-colored apples like red delicious, golden delicious and Ida red sold—not the bi-colored look of a Honeycrisp.

“Think about it—when you go into a grocery store, you can’t taste anything. You can only go by look,” Mike says. Mark remembers even harsher comments when they first showed their Honeycrisp apples. “People used to say, ‘Man, those are kind of ugly. I don’t think those will go anywhere.’ ” 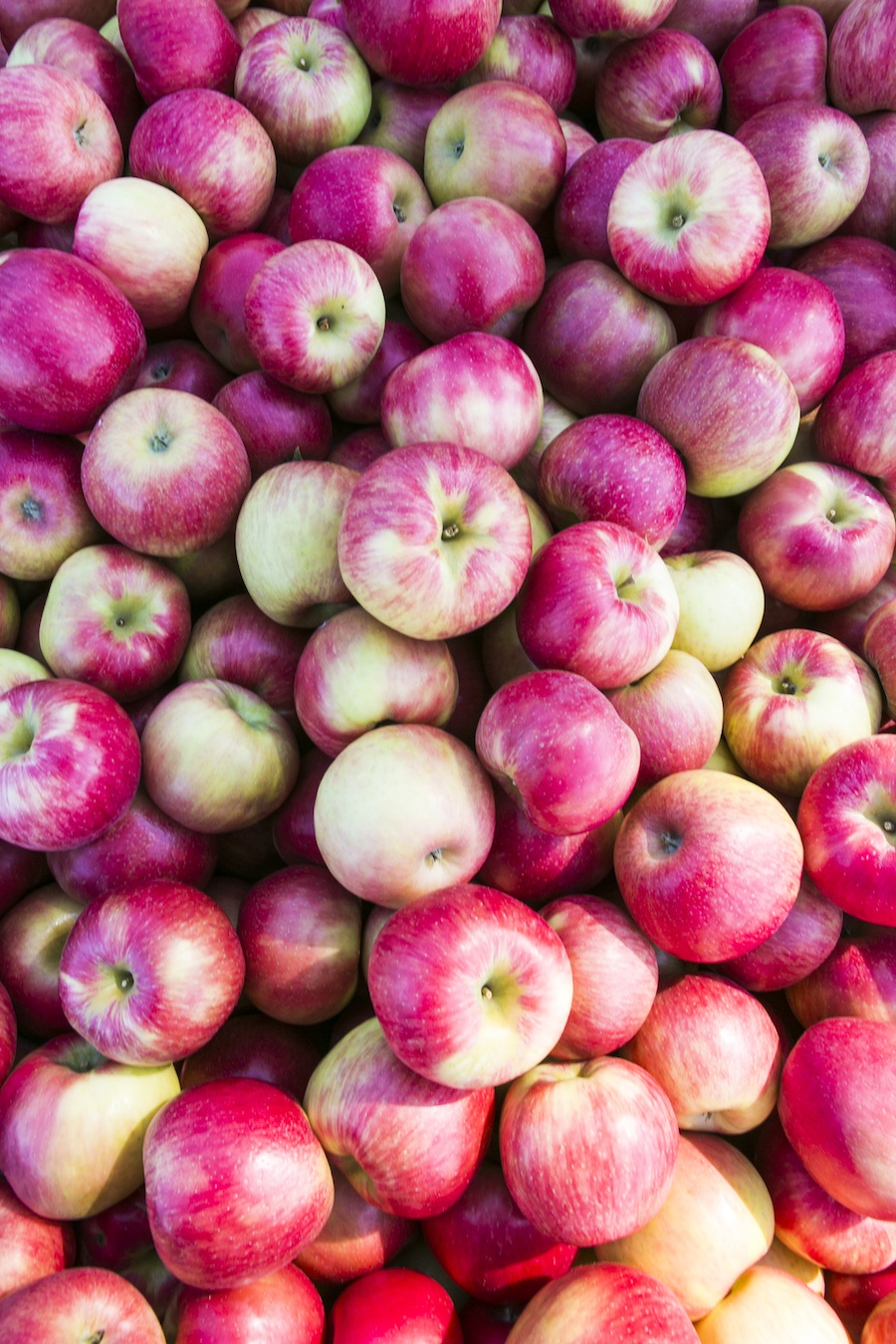 But it wasn’t just the color that haunted the Honeycrisp—it was the skin. It’s such a sensitive apple that farmers had to be sure about their investment. “The Honeycrisp is the hardest apple to grow, pack and ship,” says Diane Smith, executive director of the Michigan Apple Committee, which markets Michigan apple growers. The Evans Brothers know this firsthand.

Harvesters of Evanses’ seven other apple varieties are paid by volume, but Honeycrisp apple pickers are paid by the hour. Rushing the job can damage the apple. And unlike other apple varieties that can be picked in one deft move, Honeycrisps require a multi-step picking process by hand pickers. I watched about a dozen patient laborers that day, painstakingly pulling ripened fruit from branches, swiftly snipping stems and gently placing apples into side satchels so they wouldn’t bruise—a process no machine could replicate. 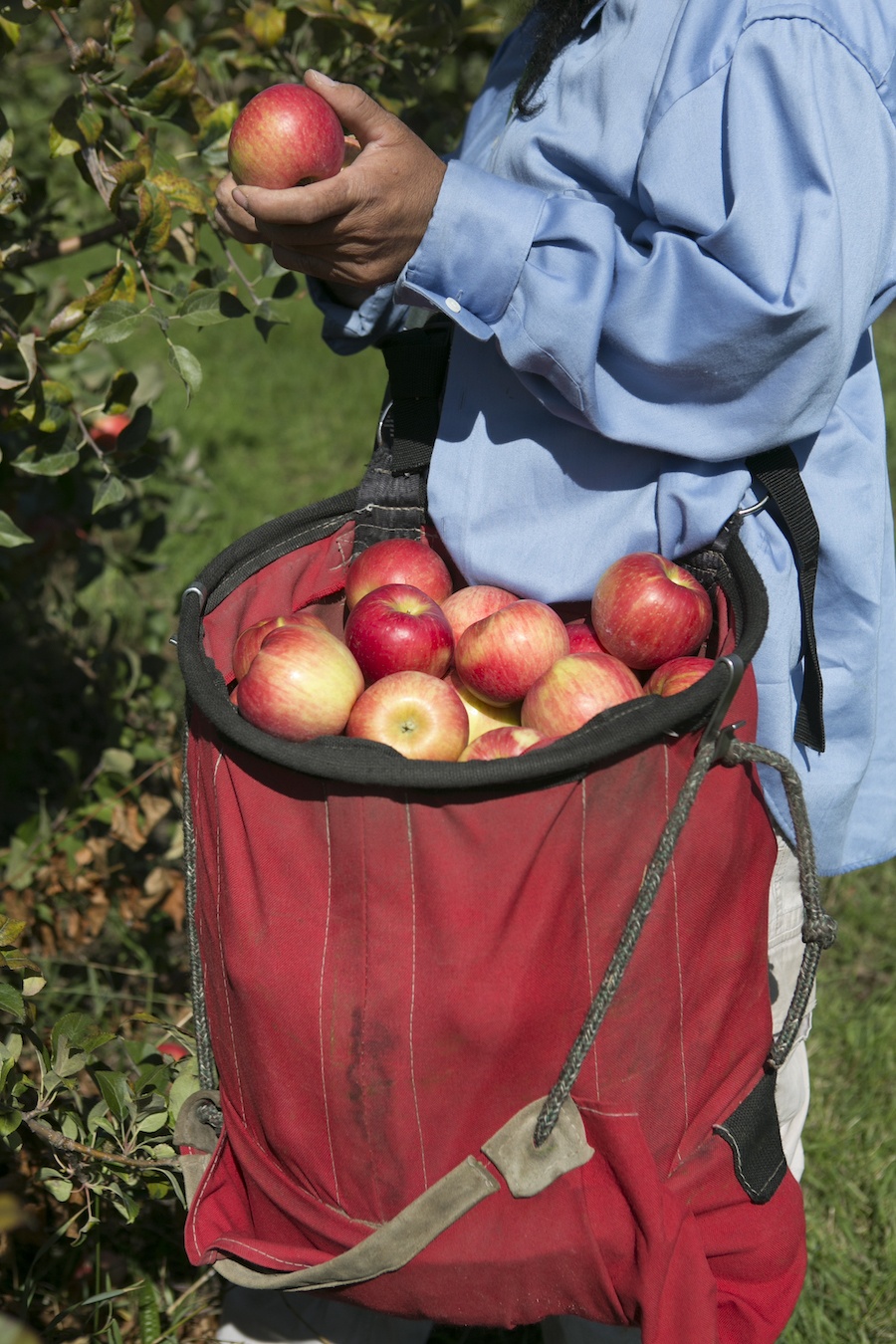 So why grow it? After all, here is an apple that looks ugly (by 1990s industry standards) and is costly to pick. And as Mike explains, farmers take a significant financial risk with any new apple variety since it can take nearly $250,000 to plant an orchard that can produce 10,000 bushels. “It’s difficult to come up with a winner of an apple. If you’re not careful, you could jump into something that’s not very good.”

It comes back to climate, much like those farms the brothers remembered visiting in New Zealand. Mike says Northern Michigan from Oceana County north has always been good for growing bi-colored apples because of the sandy soil, warm days and cool fall nights. Smith concurs. “There is something about our climate that makes all of our apples—and the Honeycrisp in particular—better,” she says. 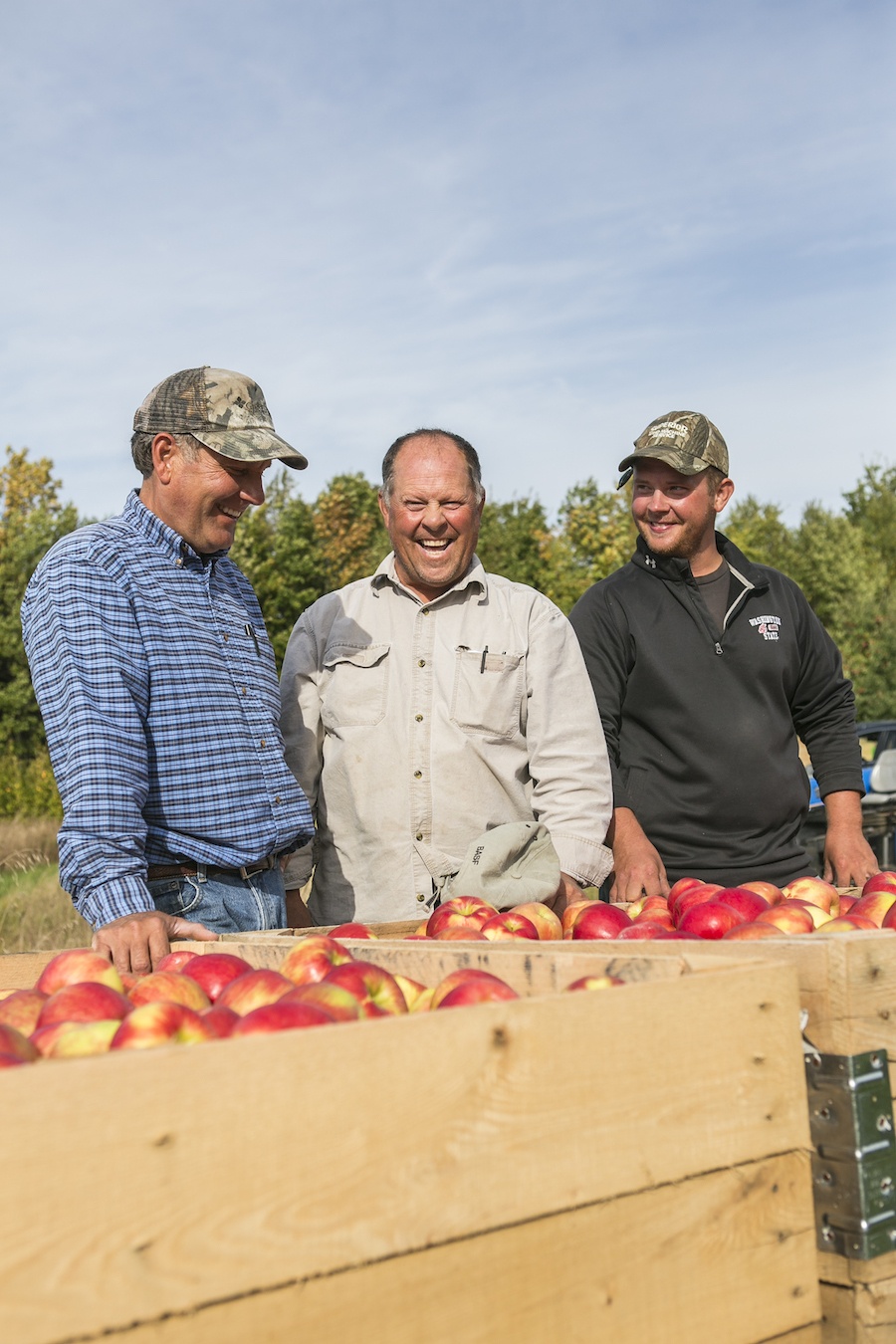 This is when I realize that Mark isn’t the type of risk-taker who rashly rushes into business decisions. He takes calculated risks and follows trends in order to push the business forward. The family started growing cherries on the farm 70 years ago (and to this day, they still grow more cherries than apples), then added processed apples until profit margins became so low that they shifted to fresh fruit—which led them to the Honeycrisp and SweeTango. They also planted grape vineyards eight years ago.

Not all of Mark’s bets pan out. A few years ago, he and his brother experimented in the gourmet food mail order business, akin to Harry & David. A paint-peeled sign by the road in front of their farm, Evans Brothers Gift Apples, is an artifact of the defunct business unit. But for Mark, that’s just part of the process and evolution as an apple farmer. In a twist of irony, the cold storage unit he purchased for housing the now-obsolete fruit gift baskets is now storing their latest bet—SweeTango apples that need a constant 30 degrees to stay tasty.

His 28-year-old nephew Mark, who recently graduated from Washington State University with a horticulture degree specializing in viticulture (grape cultivation), returned to Michigan to join his dad and uncle in the family business and try new ideas based on his training. He is experimenting with small-batch winemaking in hopes that the farm could sell wine in the future. “It’s great to be here, but I’m also scared to death,” the younger Mark says. “You’re always investing in something that might not work. That’s why you have to do your homework.” 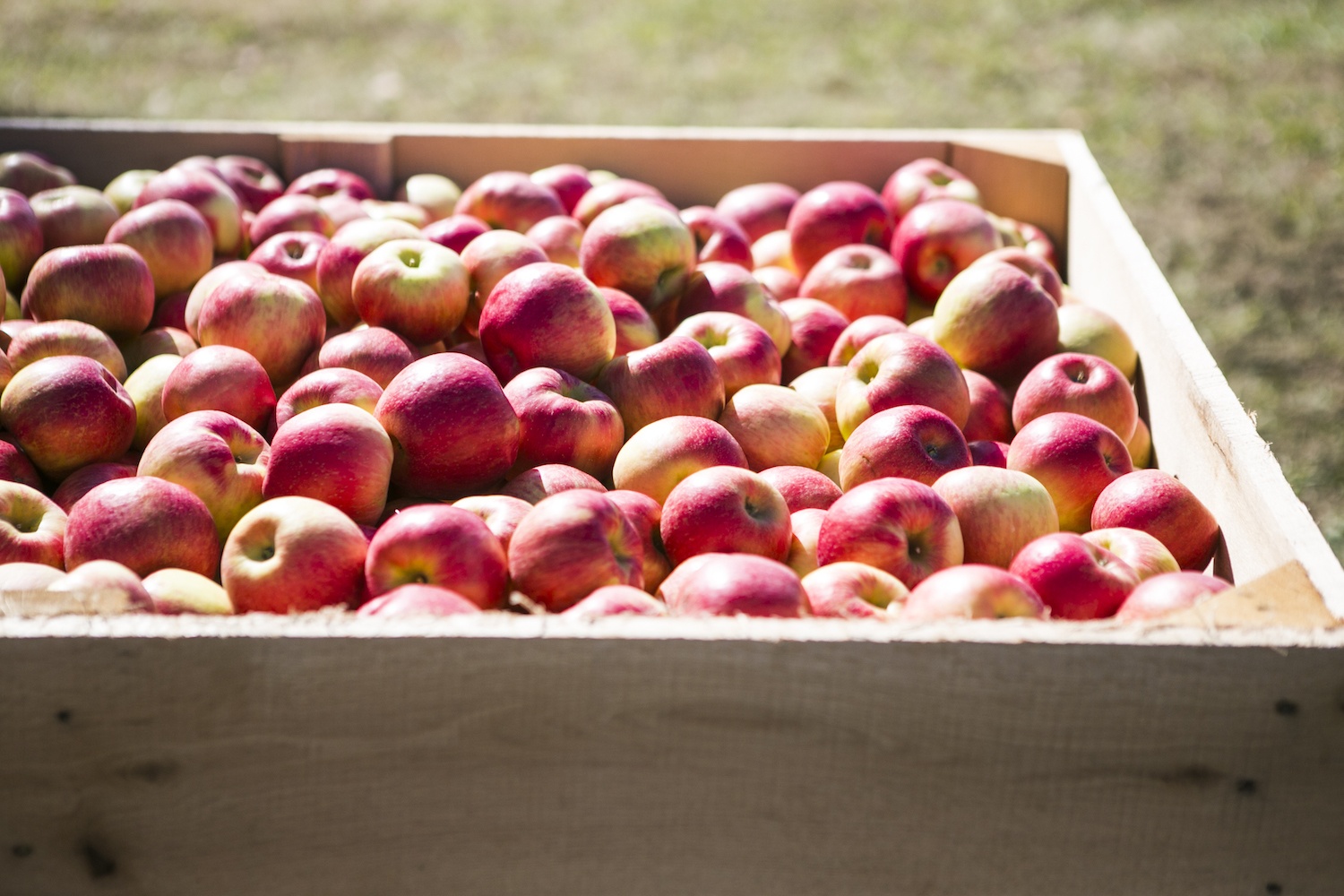 Whether or not the Honeycrisp stays in vogue, farm co-owner Mark isn’t concerned about it being a fad apple. For him, the meteoric rise in popularity of the Honeycrisp is about more than the varietal itself. It’s about what is possible in an industry that historically viewed the apple as a commodity product until now.

Diane Smith agrees. “The Honeycrisp elevated the profile of apples and the Michigan apple industry in general. It woke everyone up to see that while we love having Macintosh and Red and Gold Delicious, consumers are open to trying new things. It’s a juggernaut.”

The Honeycrisp is responsible for more apple consumption in general—and for consumers paying more for something that tastes better. “The Honeycrisp showed apple farmers what is possible,” Mark says.

It starts with growing a delicious piece of fruit. And you can bet that Mark is already thinking of what he’ll grow next. 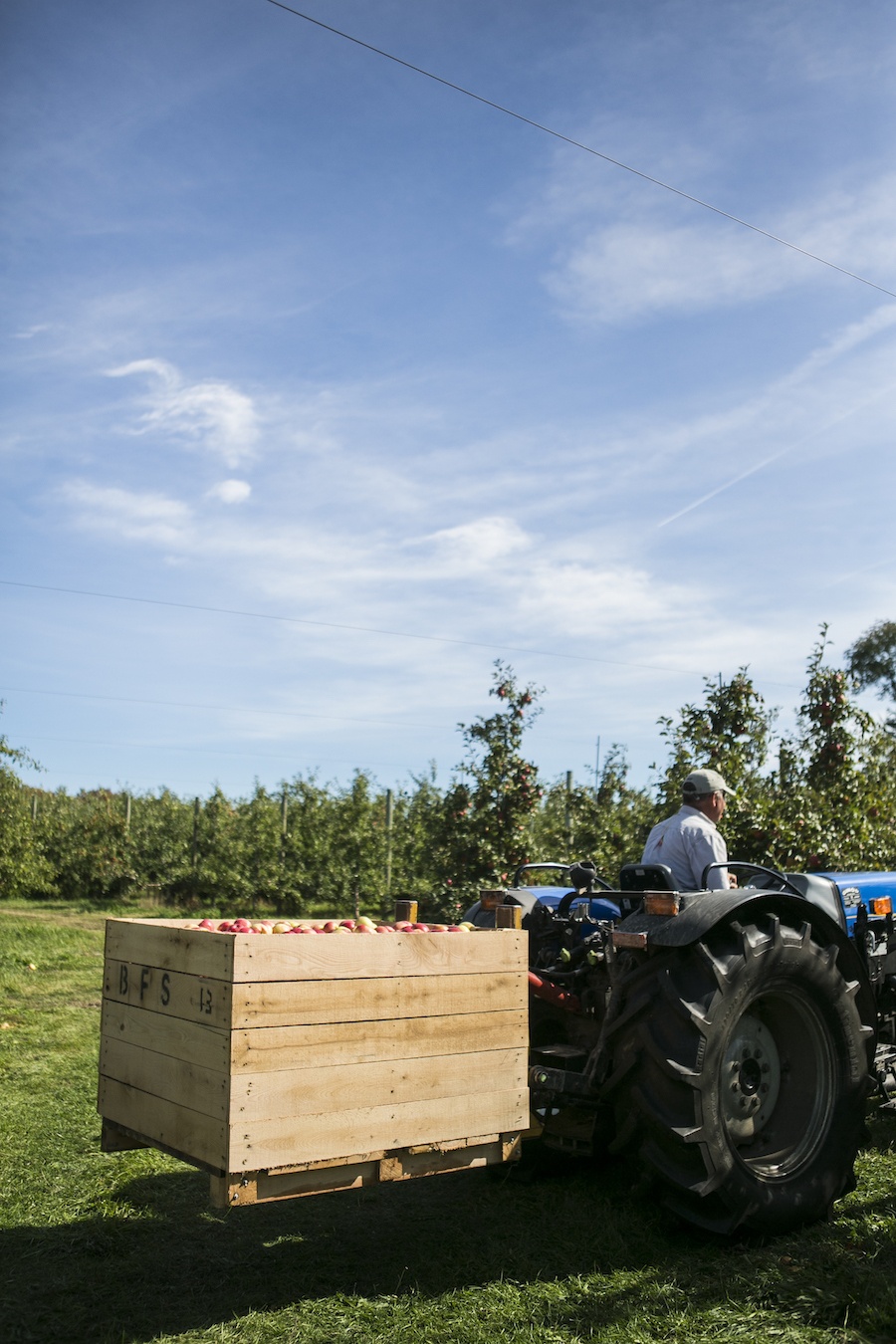 Take a spin around Northern Michigan on any given fall day, and it’s no surprise that apples are Michigan’s largest and most valuable fruit crop—with 900 apple farms and 37,000 acres of apples. Just how valuable is that? As the third-largest apple producer in the country, Michigan generates an estimated economic impact of $700 million annually from the fall fruit. We’ve culled a handful of ideas and stops for creating a perfect fall day celebrating one of Michigan’s most prized fruits. Throw in a tank of gas, a sweater and a picnic blanket—and enjoy.

Kilcherman’s Christmas Cove Farm | 11573 N. Kilcherman Rd., Northport | 231.386.5637
A four-generational farm with 250 apple varieties, most of which are historical or antique apples—you can try Thomas Jefferson’s favorite apple, the Esopus Spitzenburg. Try the fresh-pressed, unpasteurized cider that can contain up to 60 apple varieties. Read more about the Kilchermans in this Traverse Magazine feature.

Here’s your guide to Michigan U-picks.

Watch and learn how to make the perfect caramel apple …