The show by Jim Belushi and the Board of Comedy at Little River Casino Resort in Manistee September 26 is billed as an evening of comic improv, with some music thrown in, but for one of the featured performers it will also be a homecoming. Larry Joe Campbell says the opportunity to perform just an hour away from where he grew up is a coup. “It’s part high school reunion, part college reunion. I’ve been getting calls and Facebook messages from people saying, ‘I’ll be there.’ It’s great to be able to go back so close to home,” he said. “I’m really looking forward to going back to Michigan.”

Campbell grew up in Cadillac and graduated from Pine River. He attended college at Central Michigan, where he got his Bachelor’s degree, and Wayne State, where he earned a Master’s. From there he went out west and landed the role in According to Jim as Andy, Jim Belushi’s best friend. That’s also the way it worked out in real life. “Jim is one of my most favorite people in the whole world,” said Campbell. “When I got out to LA he was a mentor. As a father, as a man, as a husband I run things by him. He’s a dear friend.”

Apparently Belushi agrees. In a Q&A posted on the Board’s website, he says, “What’s great about this show is that it reunites me with Larry Joe Campbell. He’s the best partner I’ve ever had in my career. He’s the funniest man I know and he is effortless on stage to work with. I adore him. He makes me cry on stage, he’s so funny.”

Campbell says because so many in the audience are familiar with According to Jim, which ran for eight years on ABC, people sometimes expect to see them reprise their roles from the show. But their parts in the sketches diverge wildly from the TV show. “When we’re together, they seem to think it’s Andy and Jim. Our characters are very different.”

As is the rest of the cast. Typically three other comics are part of the group, as well as a pianist. Together they create comic arias, scenes from films that were never made (often for good reason), and engage in all sorts of comic hijinks. Campbell says the show is built around suggestions from the audience, then totally improvised. Both Belushi and Campbell says the audience’s enthusiasm and energy are what can make each show special. “We take audience suggestions. There’s a lot of audience involvement. People want to be part of the magic. If you’re a part of that night, it’s a night you’ll remember,” Campbell said. 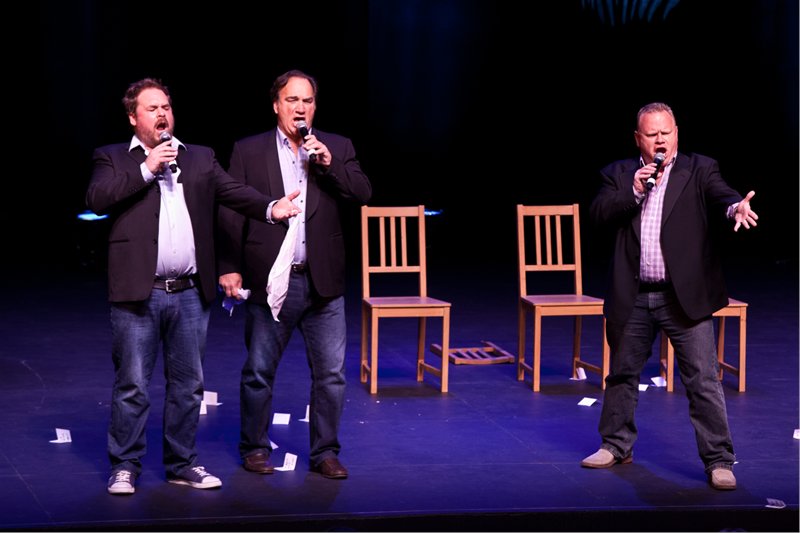 Campbell is also busy with other projects. He’s a member of other comedy troupes and also just finished a movie with both Belushi and fellow Board member Joshua Funk, directed by Kenny Ortega. “It’s called A Change of Heart,” Campbell said. “It’s about a man who has a heart transplant and changes his personality and character. It’s a beautiful, funny movie.”

While Belushi is the name out front and the most well-known of the group, it’s a true group effort. Campbell says Belushi opens the show and warms up the audience, then becomes one of the cast. “It’s a party atmosphere,” said Campbell. “Jim opens up the show, gets them going. Then it’s a torpedo of fun.”

The show is at 9 pm Friday, September 26. For tickets or additional information, go to LRCR.com.