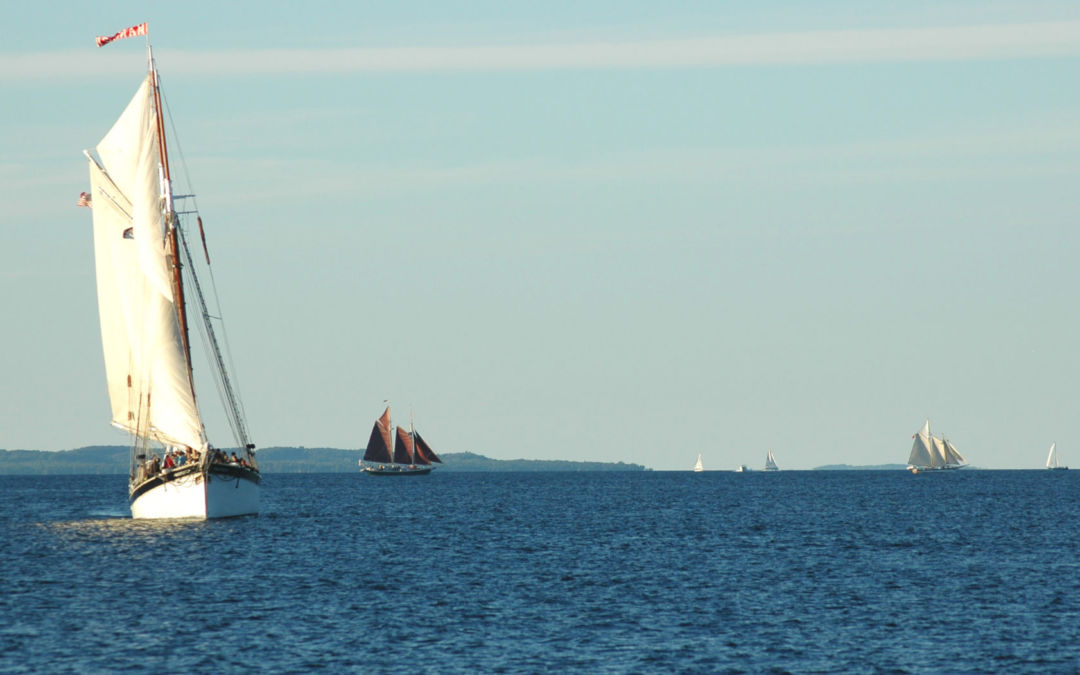 The 2014 Michigan Schooner Festival is being held in Traverse City from September 19-21, 2014. Over the course of the three day festival people will have a chance to see, tour and sail in six of the schooner vessels all in celebration of Great Lakes “tall ships.”

“It’s going to be great,” says Cindy Ruzak of the nonprofit Maritime Heritage Alliance, which organized the first Michigan Schooner Festival in 2009. “I think Traverse City is actually poised to be as big a maritime destination as Mystic, Connecticut – we just have to do more to capitalize on what we have.”

Four of Traverse City’s own tall ships—Manitou, Inland Seas, Madeline and Champion—will be on hand for the festival, as well as two visiting ships: the three-masted schooner Denis Sullivan of Milwaukee and the replica sloop Friends Good Will from South Haven. All six will sail down West Grand Traverse Bay to the city’s waterfront Friday afternoon in the traditional “Grand Parade of Sail” that opens the festival.

From then on, it’s a steady two days of deck tours, sailing cruises, performances, films, lectures and exhibits related to the maritime history of the area, including:

On Sunday there will be a Post-Concert Reception aboard one of the schooner trips. Enjoy a taste of the “Sparkling Schooner” wine from L. Mawby’s and hors d’oeuvres from Harrington’s by the Bay after enjoying a nautical concert (featuring Wagner’s “Flying Dutchman” overture and other nautical related songs) by the Traverse Symphony Orchestra. To learn more and purchase tickets go to MyNorthTickets.com.

Though it’s hundreds of miles from the ocean, Traverse City has always been a seafaring community. The town is still home to the Great Lakes Maritime Academy — the only school in the nation that certifies deck and engineering officers for both saltwater and freshwater vessels — but it’s the “tall ships” that enchant visitors and have become the community’s unofficial mascots.

In fact, Traverse City is home to more of these imposing sailing vessels than any other port in Michigan. And although they no longer haul lumber or carry the mail, the tall ships of Traverse City play a growing role in the community’s economic, educational and cultural life.

Some are working replicas of 18th and 19th century ships, available for dockside tours and (if you’re lucky enough to be in the right place at the right time) a free ride around the bay. Others offer excursion cruises across the bay each afternoon, and some even serve as floating science classrooms where students learn about the area’s aquatic environment and its maritime history.

Undoubtedly, the most easily recognized vessel in the Traverse City fleet is the Tall Ship Manitou, a 114-foot, 62-passenger schooner that offers three two-hour cruises across the bay each day of the week, as well as a number of specialty cruises. In the fall, Manitou becomes a floating bed and breakfast, and is available for charter sailing.

Just as recognizable are the dark red tanbark sails of the Inland Seas, a 77-foot schooner operated by the Inland Seas Education Association, which operates “floating classroom” programs where students of all ages learn about the ecology of the Great Lakes by spending a half-day sailing and studying science on Grand Traverse Bay.

Visitors are also likely to spot some of the many sailing vessels operated by the Maritime Heritage Alliance  or see them docked at Heritage Harbor along M-22 just north of the city. Their best known vessel is 92-foot Madeline, the twin-masted replica of an 1840’s commercial ship that served as Traverse City’s first schoolhouse during the winter of 1850-51. The Alliance also sails the 39-foot cutter Champion.

For ticket and schedule information about the 2014 Michigan Schooner Festival go to their website or call (231) 946-2647.

Purchase tickets to the Sunday Post-Concert Reception at MyNorthTickets.com.

The Story of Inland Seas