Torch Lake Troubadour: The Bagpiper at the End of the Dock 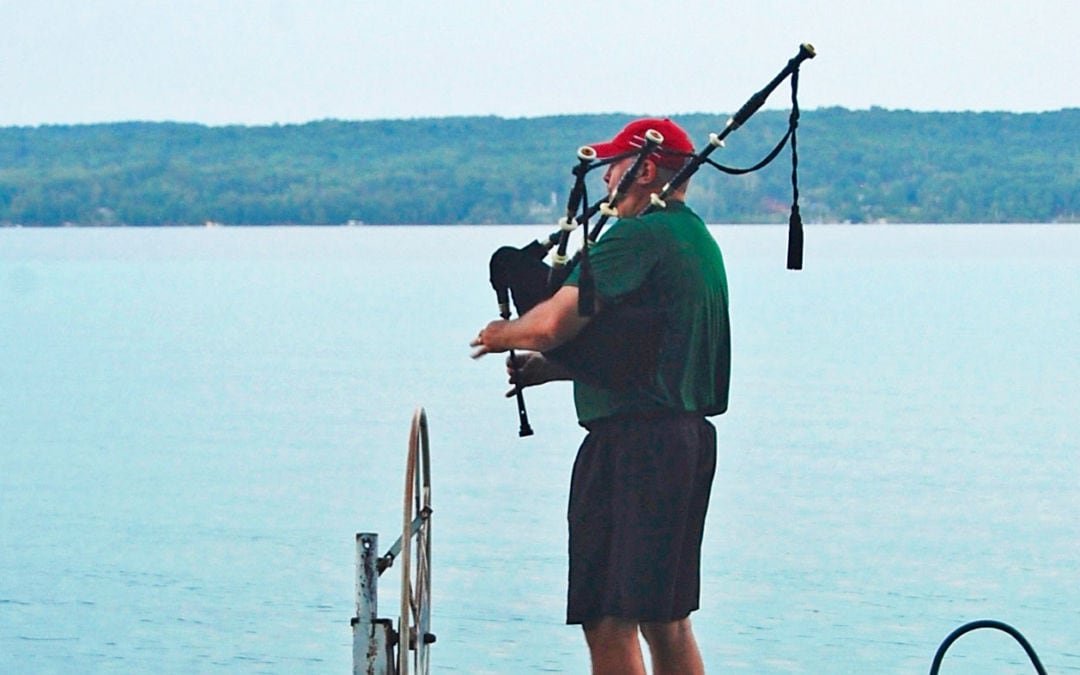 Every summer for the last two decades, Andy Michaud, director of bands at Chatfield High School in Littleton, Colorado, has taken a Northern Michigan vacation at his in-laws’ cottage on Torch Lake. The married father of three learned to play the Great Highland bagpipes to pass the time while his daughters competed in Irish Dance competitions. He’s studied with some of the best in the world, and for the last 12 years, the gregarious resident of Highlands Ranch, Colorado, has spent his summers delighting people on the shores of Torch Lake and other Northern Michigan beaches with his talents. MyNorth contributor and ardent Torch Laker Kathy Belden met Michaud dockside for some musings on the art of the piper.

I pipe off the dock at my in-laws place at sunset. It’s beautiful. People come out of their cottages, and sometimes there might be about a dozen boats right off shore. Sometimes, I go over to Barnes Park [near Eastport] and pipe on the shore of Lake Michigan. I got a gig out of it once; played for a dinner party! I also pipe off of friends’ docks on the other side of Torch. I’ve been doing the Fourth of July Central Lake parade for awhile, with my daughters Molly and Maggie, who Irish step dance their way down the parade route. We’ve become a fixture. It’s a lot of fun. Yup, sometimes I wear a kilt. It’s a Colorado Tartan for all the Scots in Colorado. It’s blue and green. Even though my last name is French, my grandmother was Irish; my grandpa was from Scotland. If I need bagpiping supplies, I go to Henderson Imports on Garfield in Traverse City. They know me in there.

What’s in your repertoire? Any requests?

I have about 300 tunes in my head. I’m fluent in about 100 of them. It keeps the brain sharp. I get requests for “Old Cock of the North.” Yes, that’s a real tune! People like to hear “Scotland the Brave,” “O Danny Boy,” and of course, “Amazing Grace.” Most pipers get tired of playing that one. But I can also play tunes from the Flintstones, AC/DC and the Dropkick Murphys. That’s a punk rock Celtic band.

What’s your connection to Interlochen?

I traveled with a student drum corps in college. I’ve been everywhere, so I was familiar with Interlochen [Summer Arts Camp]. Every year, I try to send some of my band students there. And when my students come back from a summer at Interlochen, they are different musicians and different people. We go to a lot of concerts at Interlochen, and I try to see my students perform there. The music is influential here. I’d love to substitute teach there someday.

What’s the connection between Colorado and Northern Michigan?

The lifestyle, obviously. But the lakes here are awesome. You’d be surprised at how many other Coloradoans are up here. I love Colorado—I’m a native—but I get to spend my summers in Michigan. I’m pretty lucky.

What do you love about being Up North?

So many things! I unplug from email and go completely off the grid. During the school year, it’s all about the bands, hockey for my son, and Irish dance competitions for the girls. I love being with extended family, and the Midwestern hospitality is great. Just about every morning, I fish with my brother-in-law. I’ve caught some good size salmon, and love to cook it for the family. It’s a joy to be up here. It’s where summer happens.