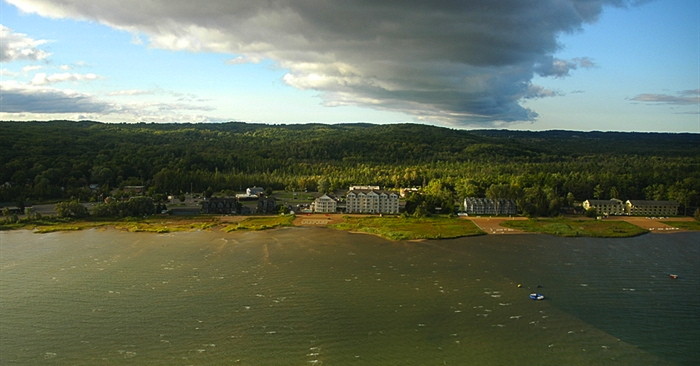 For those dreaming of a vacation in Traverse City without the bustling crowds, shoulder season could make those desires a reality. During the busiest stretches of summer like the 4th of July, the National Cherry Festival and the Traverse City Film Festival, the influx of visitors causes the prices of accommodations to rise. If you’re someone who doesn’t mind missing the pinnacle of Northern Michigan events and wants to savor a relaxing getaway on the bay, the sweet spots of shoulder season will serve you just right. Read on for a rundown of when to come Up North to maximize your R&R.

Wait, what is Shoulder Season?

Shoulder season is typically the window of time either before or after the peak vacation season of a prime destination, like Traverse City. When it’s timed right, shoulder season can be positioned just on the brink of when things get hectic and the weather is still ideal for a lazy day on the beach or boating on the bay. In the travel industry, the lower number of visitors could potentially mean cheaper accommodations or more deals around town, making the fleeting phenomenon a traveler’s fantasy.

In recent years, however, shoulder season is of a more ephemeral nature, especially in tourist hubs like TC.

“It’s really a function of supply and demand, and something that changes almost daily,” says Mike Norton, member of the Traverse City Tourism board. “Even in the middle of peak season you can get deals, and even when you think things will be quiet, prices can spike.”

But not to fret! Even if finding the perfect time for your trip isn’t cut and dry, there are some general guidelines you can follow. July and August are Traverse City’s busiest months, with June being a close third; therefore, coming in May before the majority of people arrive or September when most visitors have cleared are usually useful benchmarks. Norton states that during late September and early October (dubbed “color season” because of the eruption of auburn hues adorning Northern Michigan’s outdoors) visitors will flock Up North and prices will rise in turn. So while the “before Memorial Day, after Labor Day” rule is helpful to a degree, there are many exceptions. Like planning for anything, the best way to seek out sensible prices is vigilant research — and patience won’t hurt, too.

“There is no off-season” is a popular phrase within the world of organized sports, but it could easily be applied to Traverse City tourism, too. While the dead of winter could probably be classified as the traveling off-season, as most people are preparing for the holidays, accommodations around Northern Michigan aren’t seasonal like the summer-only hotels of Mackinac Island.

According to Cherry Tree Inn & Suites manager Jonathan Pack, the demand itself for places to stay within the Cherry Capital doesn’t fluctuate so much as the specifications of the demands.

“Of course, the big demand periods are July and August, specifically the last week of July and the first week of August,” Pack says. “This is mainly because families are trying to take their vacations before school starts for kids. But September can be busy too, in fact, last year, [September] was [Cherry Tree Inn & Suites’] busiest month.”

Pack asserts that nearly every weekend during the summer months in TC will be filled up, while most weekdays offer vacancy. He also says that while autumn months can be bustling too, the crowds and the energy are different.

“You won’t see as many families. There’s more of the older generations, empty nesters, or young couples. People who aren’t dependent on a school structure,” he says.

Frustrated with the masses during peak season? Consider that hotels are very similar to golf courses, in that they only have three big months per year to make enough money to sustain their resources throughout the year.

“[Peak season] helps us get through the winter,” Pack says. “It gives us the opportunity to make improvements during the off-season and maintain our facilities throughout the year.”

If you plan ahead and realize when the demand for accommodations will be highest, you’ll be able to spot shoulder season in Traverse City, however elusive it may seem. Travelers, travel on!