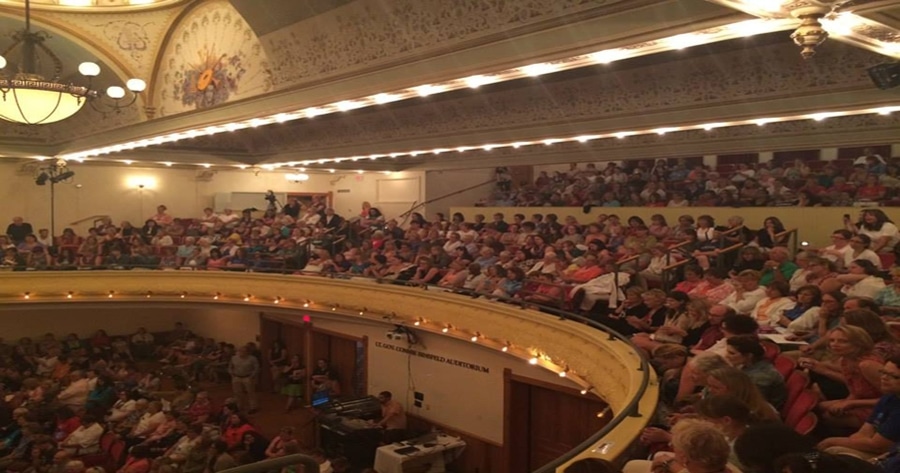 For those who love Northern Michigan book events: after a very successful spring season, the National Writers Series is back with a bang. In its five years of hosting funny, poignant and sometimes outrageous conversation onstage at the City Opera House, the National Writers Series in Traverse City has become one of America’s must-stops for authors on national book tours. The tradition of great stories and great conversation continues with our fifth anniversary season.

This season, we’ll hear new stories about second chances, redemption and homecoming, among many laughs and a few quiet moments of reflection. To see the much anticipated 2014 fall line-up check out the list below. For more details and ticket prices visit the National Writers Series website.

On September 15, the National Writers Series will kick off their new season when A.J. Baime and Bryce Hoffman meet on stage to discuss their new books Arsenal of Democracy and American Icon with the grand dame of automobile journalism Jean Jennings.

Bryce Hoffman is a bestselling author, speaker and consultant. An award-winning journalist, he spent two decades covering major companies in the automotive, technology and biotechnology industries.

At the end of 2008 Ford Motor Company was in the fight of its life but when Congress threw it a taxpayer lifeline, Ford ignored it.

Instead, the iconic company under the leadership of Alan Mulally pulled off one of the biggest comebacks in business history. It would become one of the great management narratives of our time.  While the rest of Detroit collapsed, Ford went from the brink of bankruptcy to being the most profitable automaker in the world.

From his front row seat as the Ford beat reporter for the Detroit News, Hoffman conducted hundreds of interviews and gleaned top-secret documents, memos and archives to craft compelling narrative nonfiction that reads like a high stakes drama. American Icon: Alan Mulally and the Fight to Save Ford Motor Company has become a manual for CEOs and a guide for organizations that want to transform their cultures and build winning teams.

A.J. Baime is a regular contributor to the Wall Street Journal and an editor-at-large at Playboy. In his latest book Arsenal of Democracy: FDR, Detroit, and an Epic Quest to Arm an America at War, the Ford Motor Company and its production of the B-24 Liberator heavy bomber take center stage. He focuses on Ford’s B-24 bomber plant outside Detroit in Willow Run, where for the first time engineers attempted to mass-produce airplanes the way they did cars.  It’s an engrossing story that Baime described as an opportunity to “tell a rich story about the most important collective achievement of any city in the nation’s history, and that’s Detroit during World War II.”

Baime’s first book Go Like Hell: Ford, Ferrari, and their Battle for Speed and Glory at Le Mans, is currently in development for a major motion picture by 20th Century Fox, starring Tom Cruise and Brad Pitt.

Guest host Jean Jennings has been writing about the car business for 30 years. She’s also been a cab owner/operator, a test driver, welder, and mechanic. She was a writer at Car and Driver and established Automobile Magazine with David E. Davis, Jr. Jennings was the magazine’s first Executive Editor, became Editor in Chief in 2000, and added the title of President of Automobile Magazine in 2006. Check out her website for more information.

In Partnership with TC Reads

The National Writers Series event with bestselling author Nancy Horan kicks off a partnership with Traverse City READS, a “One Book, One Community” literacy initiative. The two organizations have joined forces to present the thirteenth annual community book read. “Our new partnership with TC Reads only makes both of us stronger, as TC Reads has long lead the way in community-wide discussion about great books,” National Writers Series co-founder Doug Stanton said.

Nancy Horan is the author of the blockbuster 2007 bestseller and book club favorite Loving Frank, which chronicles a little-known chapter in the life of legendary American architect Frank Lloyd Wright and his client, Mamah Borthwick Cheney. Translated into sixteen languages, Loving Frank won the 2009 James Fenimore Cooper Prize for Best Historical Fiction, awarded by the Society of American Historians.

In her much-anticipated second novel Under the Wide and Starry Sky, Horan beautifully depicts the improbable love story of Scottish writer Robert Louis Stevenson and his tempestuous American wife, Fanny.

Guest host Jenie Altruda is the Vice President of Communications and Engagement for the world-renowned Interlochen Center for the Arts. She is also co-founder of Speech Craft, a consulting company that provides public presentation and communications training for corporate executives.

A lifelong champion of the arts, Jenie has served on the boards of directors for the University of Michigan Museum of Art in Ann Arbor, Michigan and North Coast Repertory Theatre, in Solana Beach, California. She lives in Traverse City, with her husband and their two young boys.

*Under the Wide and Starry Sky (paper)

Sophie Kinsella is the #1 internationally bestselling author of the Shopaholic series as well as the novels Can You Keep a Secret?, The Undomestic Goddess, Remember Me?, Twenties Girl, I’ve Got Your Number and Wedding Night.

It has been several years since Kinsella published a book in the Shopaholic series. This October, U.S. fans will get to meet Kinsella in person for the first time in more than four years when she travels to the States (including Traverse City, Michigan) to promote the book launch of Shopaholic to the Stars, another fabulous installment to the beloved series and it will leave you—and your credit cards—wanting to visit Rodeo Drive.

Local retailer Relish and NWS have teamed up to offer a Shopaholic Giveaway in conjunction with this event.  Open just over two years, Relish is located in the warehouse district. They carry the best brands of clothing, in all sizes…at affordable prices!  Cool, hip, and inspired, Relish has something for everyone.  And…they are well known for their mascot Simon (a 1-year-old black pug).

*Shopaholic to the Stars (hardcover)

NWS partners with AC Paw to Benefit Animals in Need

Rita Mae Brown is the New York Times bestselling author of the Mrs. Murphy mystery series (which she writes with her tiger cat, Sneaky Pie), the Sister Jane foxhunting mysteries, and the acclaimed classic and mega-bestselling Rubyfruit Jungle. She is an Emmy-nominated screenwriter and a poet who has published countless novels, essays, screenplays, poetry, cookbooks, a memoir, and most famously, mysteries.

Brown is in enormous demand as a speaker and guest artist, but she makes few appearances. According to a 2010 Wall Street Journal article, “…she rarely leaves her farm, preferring to socialize…on her back patio, drink Coca-Cola and watch the sun set behind the Blue Ridge Mountains.”  Her NWS visit is a rare chance to meet a literary icon.

Brown holds doctorate degrees in literature and political science. She lives in Afton, Virginia, with cats, hounds and horses.

NWS is partnering with AC PAW, a nonprofit animal rescue serving Northern Michigan. Event patrons are invited to bring gifts to benefit AC PAW. A wish list of items can be found on the AC PAW Facebook page.

Brian Castner served three tours of duty in the Middle East, two of them as the commander of an Explosive Ordnance Disposal unit in Iraq. Days and nights he and his team would venture forth in heavily armed convoys from their Forward Operating Base to engage in the nerve-racking yet strangely exhilarating work of either disarming the deadly improvised explosive devices that had been discovered, or picking up the pieces when the alert came too late. They relied on an army of remote-controlled cameras and robots, but if that technology failed, a technician would have to don the eighty-pound Kevlar suit, take the long walk up to the bomb, and disarm it by hand. This lethal game of cat and mouse was, and continues to be, the real war within America’s wars in Iraq and Afghanistan.
But The Long Walk is not just about battle itself. It is also an unflinching portrayal of the toll war exacts on the men and women who are fighting it. When Castner returned home to his wife and family, he began a struggle with a no less insidious foe, an unshakable feeling of fear and confusion and survivor’s guilt that he terms The Crazy. His thrilling, heartbreaking, stunningly honest book immerses the reader in two harrowing and simultaneous realities: the terror and excitement and camaraderie of combat, and the lonely battle against the enemy within—the haunting memories that will not fade, the survival instincts that will not switch off.

Brian Turner is an award-winning American poet, essayist, professor, and soldier. In 2003, Turner crossed the line of departure with a convoy of soldiers headed into the Iraqi desert.

Now he lies awake each night beside his sleeping wife, imagining himself as a drone aircraft, hovering over the terrains of Bosnia and Vietnam, Iraq and Northern Ireland, the killing fields of Cambodia and the death camps of Europe.

In his breathtaking memoir, My Life as a Foreign Country, Turner retraces his war experience—pre-deployment to combat zone, homecoming to aftermath. Free of self-indulgence or self-glorification, his account combines recollection with the imagination’s efforts to make reality comprehensible. Across time, he seeks parallels in the histories of others who have gone to war, especially his taciturn grandfather (World War II), father (Cold War), and uncle (Vietnam). Turner also offers something that is truly rare in a memoir of violent conflict—he sees through the eyes of the enemy, imagining his way into the experience of the “other.” Through it all, he paints a devastating portrait of what it means to be a soldier and a human being.

Guest host Benjamin Busch is the author of the award-winning memoir, Dust to Dust. A former U.S. Marine Corps officer who served two combat tours in Iraq, Ben Busch returned to the U.S. to play a Marine in HBO’s Generation Kill, where he pretended to invade towns he had actually invaded in the line of duty. Ben lives in Reed City, Michigan, with his wife, historian Tracy Busch, and two young daughters.

ABOUT THE NATIONAL WRITERS SERIES