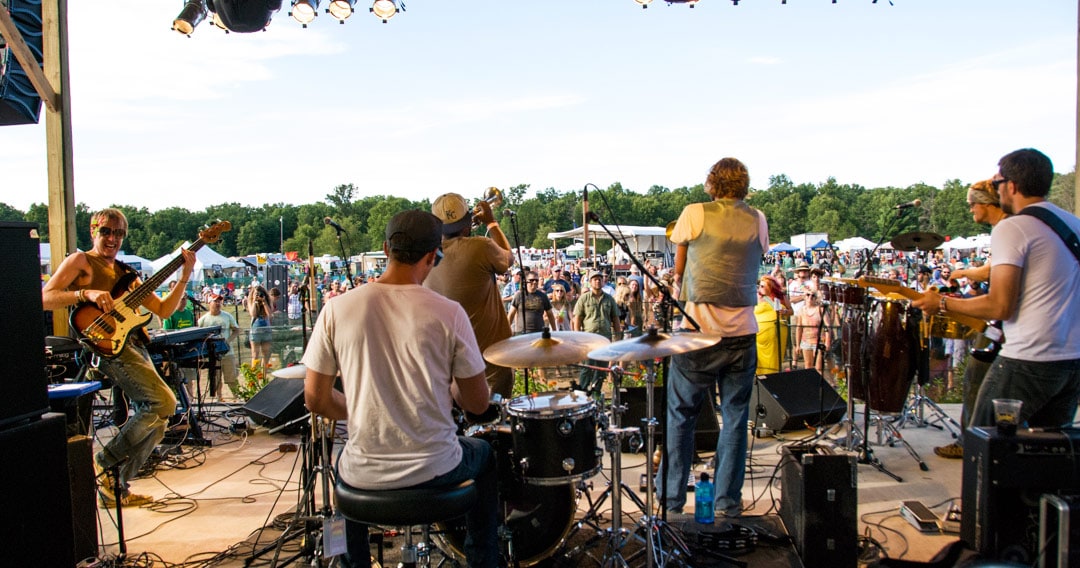 The Hoxeyville Music Festival is set within the Manistee National Forest on 85 acres of pristine, heirloom farmland and features nationally touring and Northern Michigan musicians for a three-day folk, bluegrass and roots jamboree. More akin to a family reunion than a standard music festival, Hoxeyville runs from Friday, August 15th to Sunday the 17th. MyNorth contributor, Jodie Fletcher, provides a sneak peek into this year’s festival, and how the event has become more community-oriented through its inclusion of local non-profits and activities tailored for music-loving kids.

A fan’s interaction with their favorite musicians is often limited to a hurried “nice set” as the band breaks down and packs up. When time permits, maybe the band can hang out for a bit after the show, giving fans a chance to have a quick chat, but eventually the fans go home and the band takes off for their next destination.

Not so at Hoxeyville Music Festival, where bands and fans have a whole weekend to camp together, commune and share their love of music and their genuine affection for each other. 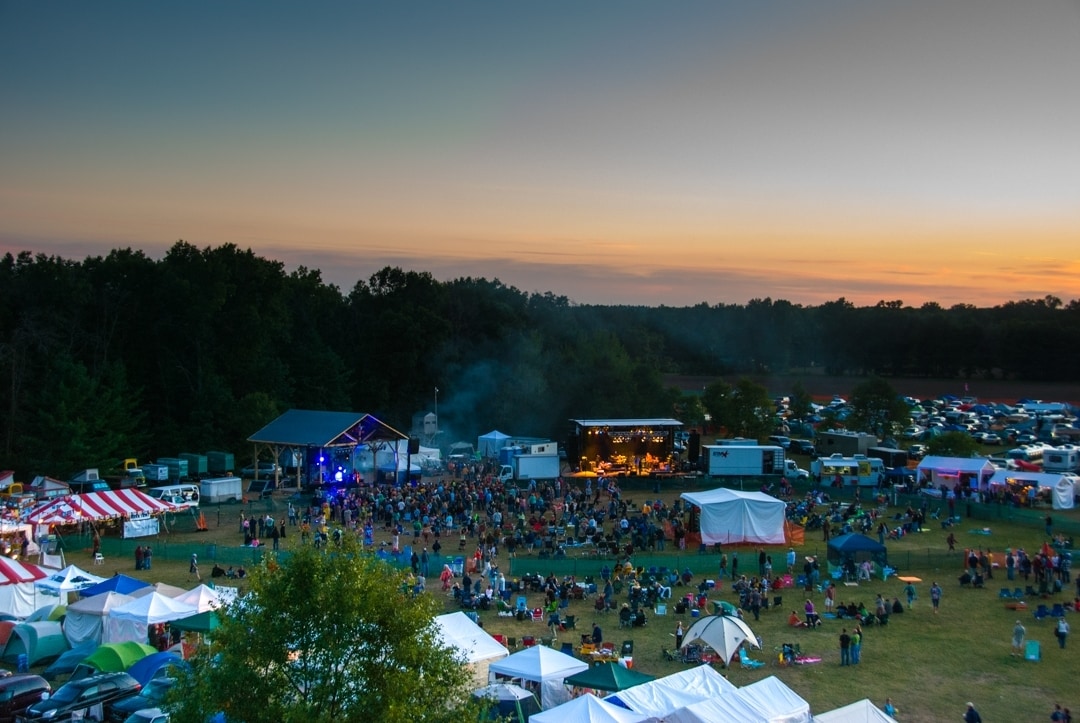 “It’s like a party in the woods with music involved,” Mike Bont, vocalist and banjo player for festival headliners Greensky Bluegrass, said. “Once you’re into the festival for the weekend, you don’t have to leave and you’re just a little community, and that’s not something that you can experience everywhere, or in everyday life.”

The festival, which is taking place Friday through Sunday, August 15th–17th, is unique for the bands, as well, because the lineup is made up of old friends who don’t get to see each other very often.

“It’s more like family,” Bont said. “It’s like a gathering of the Michigan tribe and that’s why I personally like it, because it’s one of those weekends where I get to see all of my Michigan music family and all of my friends that I’ve been hanging out with for years.”

This sense of camaraderie isn’t exclusive to the musicians, who are happy to have the time and space to interact with their fans in a more informal way than they might after a regular show.

“That’s one of the big parts of it, I think, is being able to have that fan interaction and just hang out,” Bont said. “We don’t get to play so much in Michigan anymore, so it’s an opportunity for people to see us play a couple times in one weekend.”

Like Greensky, which is celebrated for their ability to coax rock and roll from their Bluegrass instruments, the rest of the lineup features an eclectic mix of talent that stretches the concept of traditional music, morphing nostalgic sounds into something current and relevant.

“It’s kind of the underlying tone I think, in a way,” festival founder Jake Robinson said. “Just because you play Bluegrass instruments doesn’t mean you have to play Bluegrass, or vice versa.”

Greensky Bluegrass will close out the show on both Friday and Saturday nights. They will be joined by Dirty Dozen Brass Band, Steppin In It, Luke Winslow King, Ryan Montbleau, Rachel Davis Band, Airborne or Aquatic, The Crane Wives, Billy Strings & Don Julin, The Ragbirds, Seth & May Bernard, Joe Hertler & the Rainbow Seekers, The Go Rounds, Lindsay Lou & the Flatbellys, Rootstand, The Way Down Wanderers, Nicholas James & the Bandwagon, Gifts or Creatures, Fauxgrass, The Accidentals, Big Dudee Roo, Roosevelt Diggs and The Whistle Stop Revue. 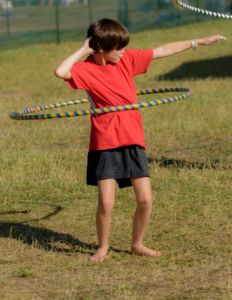 The festival is equally entertaining for kids. Photo by Andrew R. Bender

In recent years, the Hoxeyville family has expanded by a generation, making organizers more cognizant of the need to provide a family-friendly environment.

“As we’ve all gotten older, a lot of us have children,” Robinson said, “so we have a nice family camping area and a little playground. It can keep (the kids) entertained, and it is within view of the mainstage area, so as the kids are playing on the playground together, the parents can be there close and keep their eye on the music and the entertainment that’s going on too.”

The mainstage shows end at 11:30 pm, which is nice for families with small children who want to attend the festival. Ending earlier also has the added benefit of giving people a few hours to just hang out around the campground. And anyone who’s ever been friends with a bunch of musicians knows, hanging out often leads to impromptu collaborations.

Robinson said this is one of the coolest things about the festival. Once the bands are done with their official shows, many of them gather somewhere in the campground and play open mic style for several hours, often joining each other on cover songs.

And the crowd that gathers is welcome to chime in, shout out requests, and kick back and enjoy the show.

For the weekend of the festival, Hoxeyville is transformed into a self-sustaining community, providing for all of the things a couple of thousand people will collectively seek over the course of three days. Like most of the bands and attendees, the vendors at Hoxeyville are generally Michigan based and peddle wares that are often locally-sourced. Robinson said there will be six food vendors selling everything from general fare festival food to organic pizzas and dessert options. A variety of Short’s beer will be on tap as well as a natural cider, with local sodas and root beer rounding out the beverage options, and a natural well provides water that is as locally sourced as possible.

The Vendor Village at Hoxeyville will also feature 30 to 35 arts and crafts booths. Several non-profit organizations will be on site, raising awareness of issues affecting, among other things, the environment and education.

For those who want a wider range of experience than the campground provides, the surrounding area offers opportunities to partake in all of the outdoors activities typical camping trips feature. Two swimming holes close to the site double as a place to picnic, a network of trails surround the site in miles of hiking and mountain biking options and the Pine River is nearby for anyone looking to paddle or fish.

“The area obviously is very tourism driven on its own,” Robinson said. “We’ve tried to add to that in a lot of different ways. Just adding the entertainment is a huge draw, but it is a very destination-based area and I think that the event has kind of been built with that in mind.”

Hoxeyville is located on West 48 1⁄2 Road, south of M55 and east of M37. Festival entrances open at 10 am on Friday. Advance tickets, day passes and campsite reservations are available online, or can be purchased at the gate the day of the event.