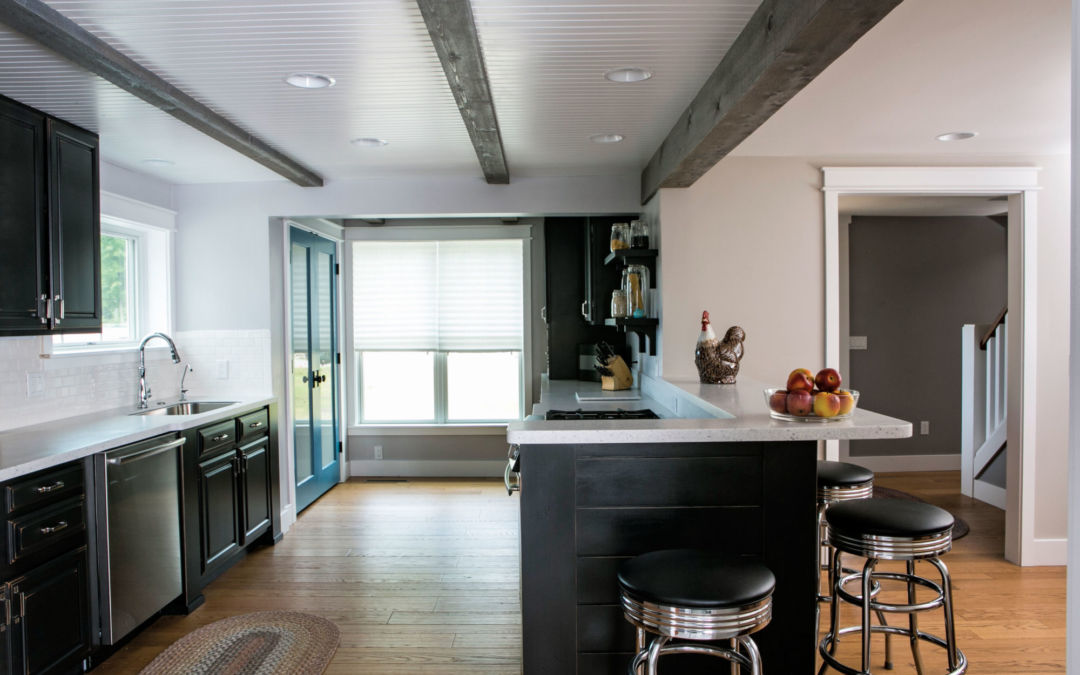 The 2014 Northern Home & Cottage Home Tour takes place on Saturday, September 13th from 10 am to 5 pm and will guide curious fans of Northern Michigan home and cottage design through the gamut of home styles—from the ultra modern to refined and refurbished. Proceeds raised during the home tour will benefit Northern Michigan non-profit, Child and Family Services of Northwestern Michigan. The fourth of ten stops on the tour is a humble farmhouse near the tip of Old Mission Peninsula that has been restored to its former glory days. Farmhouse Reno is located at 15293 Peninsula Dr., Traverse City.

Visit other homes on the 2014 Northern Home & Cottage Tour:

Save by purchasing tickets to the 2014 Northern Home & Cottage Tour at MyNorthTickets.com:

It’s the kind of project people who love rescuing old buildings dream of: a humble, once proud farmhouse set near the tip of Old Mission Peninsula, past vineyards, orchards and cerulean views of Grand Traverse Bay, that just needed some style. Well, okay, a lot of style. Like so many early last-century homes, this one had been added on to over the years in a mumbo-jumbo of rooms and finish materials that lacked integrity. Its façade was just plain dumpy. 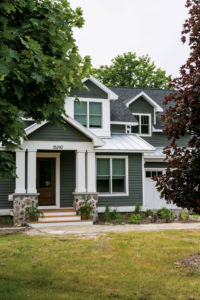 Enter owners Bill Premo and Pam Prairie who breathed handsome new life into it—a task that they say (often!) they never could have accomplished without Matt Wollam and his design and build firm.  With his signature precision and fondness for the contemporary farmhouse style, Matt worked his way through a new plan for the farmhouse wall by wall, detail by detail.  Exterior standouts include the addition of a cupola, a stately new front porch flanked by twin sets of square columns mounted on fieldstone bases and handsome gray cedar siding trimmed in white.

On the interior, Matt used faux barn wood beams in the ceiling and walnut-stained oak floors to evoke a farmhouse feel. He went on to open the cramped kitchen to allow for a prep and eating counter. Pam moved the blah 90s-era cabinetry to her workshop (the couple has lived just down the road) and went to work with antique black paint and new hardware—the result is a refurbish job that looks like high-end custom cabinetry.  Milk-white subway tiles, Corion countertops and dove gray walls round out this handsome kitchen.

The living/dining room is a striking blend of a rustic shell outfitted with Pam and Bill’s sophisticated contemporary furnishings. A screened-in porch that looks out over the pasture and old barn punctuates this generous room. With its outdoor fireplace, the porch is a lovely transitional area to the bucolic grounds. Upstairs, Matt found space for a contemporary-sized master bedroom and luxurious bath. A bonus room over the garage means plenty of elbow space for houseguests and family. New windows throughout the home bath the old rooms in light—and increased energy efficiency.

Among the many details Pam and Bill won’t want tour-goers to leave without noticing are several beadboard-clad closets that Matt designed to fit in otherwise wasted space.  The homeowners marvel at how perfectly period they look, while functioning as if they were modern—a description that, come to think of it, fits Matt’s style to a T.