Today at the 2014 National Cherry Festival in Traverse City 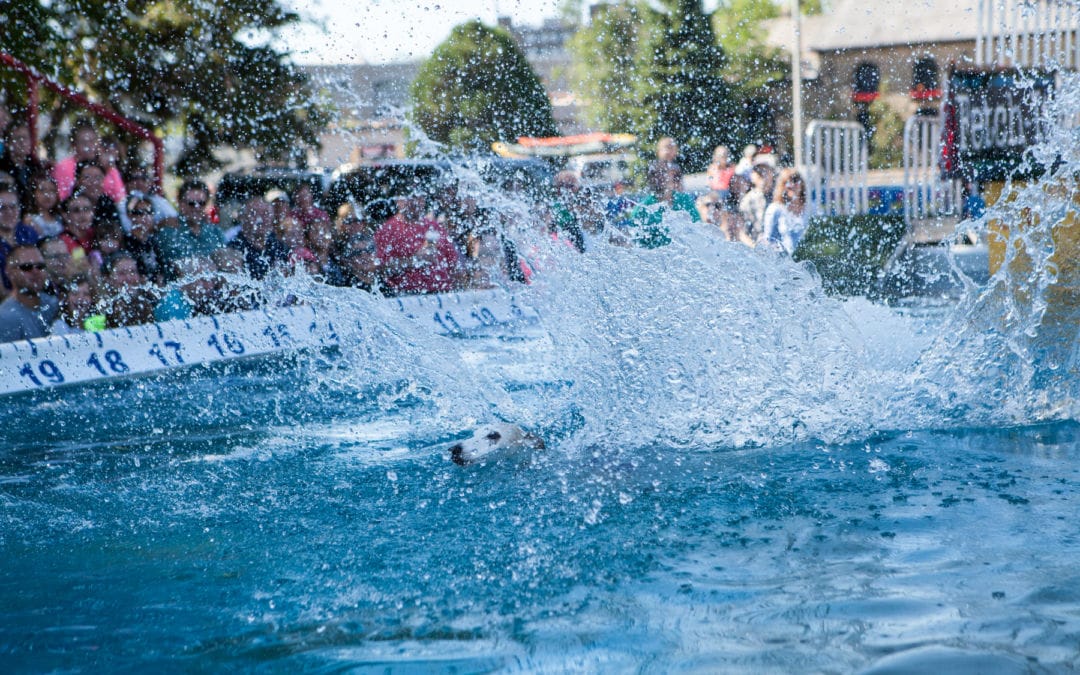 It’s National Cherry Festival season in Traverse City!  Visit this page throughout the week of the 2014 festival for updates and images covering this year’s events.

MyNorth visited the Ultimate Airs Dogs competition at 3 o’clock by the West Bay volleyball courts and it held, as it does every year, a vibrant and animated atmosphere—the audience yelping with encouragement and adoration as the canines catapulted off the diving board and soared through the air, splashing into the pool and, on occasion, spraying the spellbound spectators. MyNorth photographer Dave Weidner was on the scene to capture the energy of Friday at the National Cherry Festival. Check out the gallery below to catch what you may have missed!

Click the arrows in the gallery’s upper-right corner to expand images; hit “Escape” button on keyboard to exit full-screen:

Front and Union streets were packed with spectators enjoying a string of events happening along the downtown corridors.

The Golden Mile races took began the evening’s proceedings, with runners from across the country participating in the men’s and women’s elite races as well as the high school boy’s and girl’s races.  The winners include:

Full race results can be found at TCGoldenMile.BlogSpot.com.

Following the Golden Mile was Carter’s Kids Fun Run: like a benevolent Pied Piper of Hamlin, Traverse City’s resident home renovation specialist Carter Oosterhouse led a throng of kids along the running course along with his wife, actress Amy Smart.  The kids’ enthusiasm was difficult to corral, as evinced by several false starts by the front runners.  But the smiling faces of all participants was a nice contrast to the intensity of the Golden Mile runners (who smartly took a cool down jog with the kids).

After the last fun funner had funnily ran across the finish line, the Junior Royale Parade began along the same Front to Union route.  Marching bands, festival queens and their elementary school equivalents, gymnasts…the whole gamut was parading through Traverse City in full regalia.  Check out the gallery below for images of Thursday’s events.

Click the arrows in the gallery’s upper-right corner to expand images; hit “Escape” button on keyboard to exit full-screen:

The sun is back out to mark the passing of the first half of the Cherry Festival.  We stopped by several events today, including the Royale Pageant of Fashion and Luncheon—where the Cherry Queen, Sonya Sayler and her court of potential heirs strutted their stuff on the catwalk under the Park Place Dome— as well as the Midway and the stand-up paddleboard demonstrations at Clinch Park beach.

The Royale Pageant of Fashion and Luncheon was held at the ballroom of the Park Place Hotel. Cherry Queen Sonya Sayler and her court kicked off the show with a flapper-style dance to the swing classic “Puttin’ on the Ritz,” popularized by Fred Astaire. After this, attendees savored a luncheon catered by the hotel, complete with coffee and dessert. Following this, Sayler and her court modeled apparel from downtown Traverse City boutique Raven’s Child; they then shared the runway with a menagerie of models showcasing the latest fashions from Traverse City stores like Captain’s Quarters, Diversions, Chico’s, Relish, Haystacks, and more, as well as new clothing lines from TJ Maxx and Meijer. Mariana Keros, the fashion adviser of Meijer’s Style Team, was there to introduce the Meijer’s new clothing line and presented guests with giftbags including sunglasses, bracelets, cosmetics, special discounts, and information of fashion trends. The pageant was even graced with a visit from Traverse City Coast Guard Commanding Officer Sean M. Cross and his family, who showed off outfits from TJ Maxx. The soft-lit ambience of the Park Place ballroom paired with fine dining and the latest trends that are in vogue made for a truly royal affair.

Midway was bustling today in the temperate air. From 9 am until noon it held events for Fun and Games for Special Kids, including pie-making, an obstacle course, and face painting. Attendants also of course enjoyed the many attractions like the Ferris Wheel and snacked on festival food favorites such as funnel cakes and cotton candy.

Check out some of the best moments of the Royale Pageant of Fashion and Wednesday at the National Cherry Festival in the gallery below. To enlarge images, click the arrows in the upper-right corner of the gallery; hit the “Escape” key on your keyboard to exit full-screen:

Today was another fun-filled day in Traverse City at the National Cherry Festival! Join us here at MyNorth for exclusive coverage and photos of Tuesday Cherry Festival events including the kids’ pet show and an electrifying drum and dance performance by the Grand Traverse Band of Ottawa and Chippewa Indians!

One of the fan-favorite annual events at the National Cherry Festival is the kids’ pet show. Kids have the chance to show off their furry (or scaly) friends to a sizable audience gathered around a raised stage in F&M Park. Categories for competition included best dressed, most unusual pet, fat cat, pet and owner look-alike, ugliest mutt, and best dressed ensemble. Although only a few pets and owners took first prize in the respective categories, everyone was a winner. The air was filled with laughter, barks, and meows alike as critters were whisked around the lawns of F&M park in outlandish costumes and hilarious ensembles—I witnessed more canine superheroes than I have ever seen gathered in one place. (It was also the first time I had thought about, let alone watched, cats getting married with a human wedding party. Things got real.)

Later on at noon, festival-goers gathered in front of the Bayside Music Stage in the festival’s Open Space Park to see the Grand Traverse Band of Chippewa and Ottawa Indians perform a traditional drum and dance pow wow. And let me just say—I was sincerely pow wowed. The traditional and colorful garb worn by the Chippewa and Ottawa tribes fluttered in the chilly afternoon breeze coming off the bay, and the pounding of the drums accompanied by a chorus of chanting and singing enveloped the crowd. It was a truly spellbinding experience. This sonic celebration of culture was supplemented with Native American cuisine.

Take a look at the gallery below to get a glimpse at some of the best of Tuesday’s events at the National Cherry Festival. To enlarge images, click the arrows in the upper-right corner of the gallery; hit the “Escape” key on your keyboard to exit full-screen:

This afternoon in Traverse City, MyNorth’s Sig Steiger and Adrienne Roberts went over to F&M Park to witness first hand the raucous energy of events like the kids’ cherry pie eating contest and the turtle races. Although a fierce sense of competition hung tensely in the air, there were smiles all around as cherry pie was scarfed furiously with hands clenched obediently behind competitors’ backs, and turtles scuttled across the race stage at F&M Park as swiftly as their tiny reptilian legs could muster.

The pie eating contest was standard procedure: the young competitors were served a slice of cherry pie, and whoever finished their piece first (without handling it, of course) won the coveted blue ribbon. The contest was split up into age divisions, with participants ranging from preschool age up to 12-year-olds. Missed the kids’ pie eating contest? Not to worry, there are three more opportunities this week for your kids to get their pie-munching fix—Tuesday, July 8th at 1 pm and on Thursday, July 10th at 1 pm and 5 pm, all at F&M Park. And if you’d rather wolf down a slice of your own for sport rather than watching your kids from the sidelines, there’s an adult pie eating contest Monday night, Wednesday, and Friday all at 5 pm at the Lays Cherry Blast Stage in the festival’s Open Space Park. Dive in and feel like a kid again!

The turtle race was one-of-a-kind. Participants either brought their own critters or borrowed one to race. The racers were placed in the middle of a circular platform in a covered plastic tub, and when it was raised, a gleeful chorus of cheering and pounding on the stage erupted. The first turtle to reach the edge was declared the winner, and each heat’s winner then moved onto semi-final and final races of the most elite turtles around.

Browse the gallery below for an inside look at the highlights of Monday at the National Cherry Festival.  To enlarge images, click the arrows in the upper-right corner of the gallery; hit the “Escape” key on your keyboard to exit full-screen:

More on the National Cherry Festival