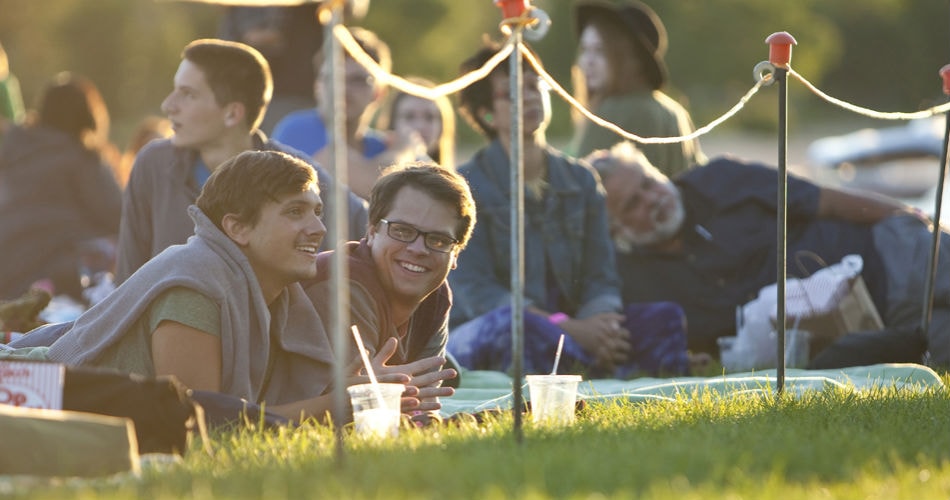 Free, outdoor movies at the Traverse City Film Festival happen every night of the festival at dusk at Traverse City’s Open Space. The screenings, which happen with the help of a giant inflatable screen, are a one-of-a-kind cinematic experience: a slight breeze rolls off nearby West Grand Traverse Bay, while hundreds of people settle into their seats and the a larger-than-life screen glows over a grassy expanse. Follow these tips for Open Space movies at the Traverse City Film Festival to make your visit stress free and even more enjoyable.

1) Arrive Early: This should go without saying, but the Open Space will be packed for each and every free movie during the week of the Film Festival. Head over early and reserve a seat with a blanket or chairs in order to guarantee a good spot to catch the flick. Arriving early might also help when it comes to finding a parking spot. Don’t forget that the Film Festival is offering a free shuttle service throughout the entire festival.

2) Bring Blankets, Chairs, and More Blankets: If you find a spot toward the front of the screen, bring a blanket to lie on. There’s no written rule on it, but it is common courtesy to keep lawn chairs toward the middle and back of this outdoor theater. Whether you are planning on lying on a blanket or sitting in lawn chairs, make sure to bring extra blankets. When the sun goes down and the breeze off the water begins to blow it can become rather chilly and you’ll be wanting a blanket to wrap up in.

3) Pack a Picnic, or Eat There: Load up a basket with goods from Traverse City (try sandwiches from nearby Mary’s Kitchen Port or Folgarelli’s) and head down to the Open Space for dinner while you wait for the movie to start. Pack your own popcorn or buy some there; numerous vendors will be placed throughout the Open Space grounds selling food, t-shirts and other goods. Remember to pack lots of water as well.

4) Stay Safe: It’s a great idea to attend the Open Space movies with the kids. However, make sure that they are with someone they know at all times. The movies begin at dusk and it is a good idea to have the kiddos around you instead of wandering off toward the open water or busy roads. It’s also useful to have something identifiable in case you need to attract the attention of someone trying to find where your blanket is stationed; even a cell phone being waved in the air can serve as a beacon for someone trying to locate you during the dark movie screening.

For adults who plan on having a few drinks before the showing, make sure you have a designated driver who can pick you up when the showing is over, which is generally somewhere around midnight.

5) Plan Ahead: If you’re from Michigan then you know the weather can change at any moment. It probably won’t snow during the screenings, but it has unfortunately rained in the past. Pack umbrellas and rain coats just in case the weather takes a turn for the worse. In the case of extreme weather, the screening will be cancelled.