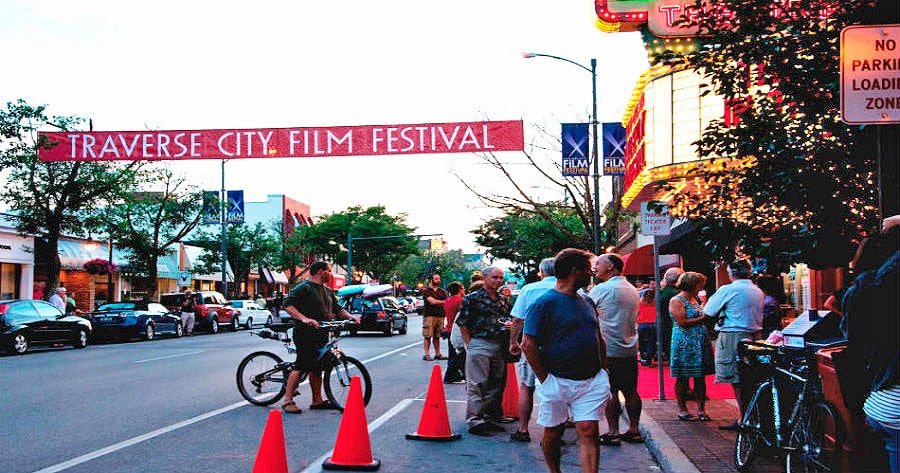 Special screenings at the 2014 Traverse City Film Festival range from an interactive podcast that will leave your cheeks hurting from laughter to Mike’s Surprise—an annual festival favorite that’s decided on a whim by the TCFF’s acting president, Michael Moore. These screening events amount to some of the most enjoyable film viewings at the festival, and we can only guarantee that they’ll make your Traverse City Film Festival experience something to remember.

Join Doug Benson (“Last Comic Standing.” “Super High Me”), our own Michael Moore, and other special guests as they record an interactive podcast featuring games and lively discussion all about movies, live from the Old Town Playhouse. We welcome back Benson, a sellout at last year’s film festival as well as at the 2013 Traverse City Winter Comedy Arts Festival, for an evening of outright hilarity. be sure to make time for this side-splitting conversation about one of the greatest things in life: the movies. Tickets for this special live event are $20.

A true titan of Hollywood, “Borat” director, “Seinfeld” writer, Emmy-winner, TCFF board member, and all-around comedic genius Larry Charles returns to TC for an unforgettably hilarious evening of surprises so secret we can’t give anything away. Let’s just say Larry (who is also the man responsible for the legendary lost Kayne West HBO pilot) has been working on quite a few exciting projects back in Los Angeles, and he’ll be bringing exclusive sneak peeks at the next big things in comedy that you won’t see anywhere else. He’s also made a new short film that you’ll be the first to see. You won’t want to miss a night spent with one of the funniest men on the planet, as he regales us with the darkly absurd and hysterical stories that have made him a TCFF treasure.

Comanche director Julianna Brannum’s moving portrait of fellow Comanche activist LaDonna Harris follows the remarkable leader’s storied career in Native political and social activism. Raised by her maternal grandparents on an Oklahoma farm during the Great Depression, Harris began a life in public service as the wife of US Senator Fred Harris. She helped return Taos Blue lake to the people of Taos Pueblo, and helped the Menominee Tribe regain federal recognition. At the request of President Lyndon Johnson, she created a course called “Indian 101” used for 35 years to teach the executive and legislative branches of the US government about American Indian  Tribes. She is President of Americans for Indian Opportunity, and is actively involved in passing her knowledge to a new generation of emerging Indigenous leaders, and in building a global Indigenous coalition.

Each year, one of our most popular screenings is the one where no one has any idea what they’re going to see. Even the projectionist doesn’t know. Festival founder and president Michael Moore presents “Mike’s Surprise” on the final day of each year’s fest. Mike may show up with a sneak preview of a big upcoming Hollywood movie or a buried treasure that had disappeared for years, or he may just show you some of his home movies. One time he just talked for two hours. That was interesting. Another year he got the whole audience up and took them for a walk around Central Neighborhood. This year, all he’ll say is that he promises there will be “no Pilates, nothing with cats, and Johnny Depp will not be joining us.” Our guess? The movie will be in color.

Featured in TCFF Board Member Mark Cousins’ acclaimed documentary “A Story of Children in Film” (TCFF ’13) and lovingly restored with the help of Cousins and his friend Tilda Swinton, this lost treasure of cinema is coming to the Bijou. “Bag of Rice” is an unforgettable urban odyssey around Tehran as seen through the eyes of a child. Determined to escape boredom at home, four-year-old Jairan accompanies her half-blind and stubborn elderly neighbor on an errand. Both are ill-equipped to face the unexpected challenges of the journey and must rely on the kindness of strangers to navigate the bustling city. What starts as an odd-couple adventure turns into a profoundly moving parable as these unlikely companions make their way through the world. It’s one of the great humanist, heartwarming in delights in cinema. In Persian with subtitles.

This winter, two homeless people froze to death in our area. No place in America is without homelessness these days. But really, do we have to watch another film about the homeless? One of the big political debates in front of the TC City Commission this summer is whether or not to turn the City’s building at 517 Wellington Street, which the film festival has used as a warehouse for many years, into a 100 bed homeless shelter. But what’s beaing done to fix the reason we have homelessness in the first place? Come watch this searing documentary produced by Thomas Morgan (“Waiting for Mamu,” TCFF ’13) that explores homelessness across America by telling the stories of those who live it every day.