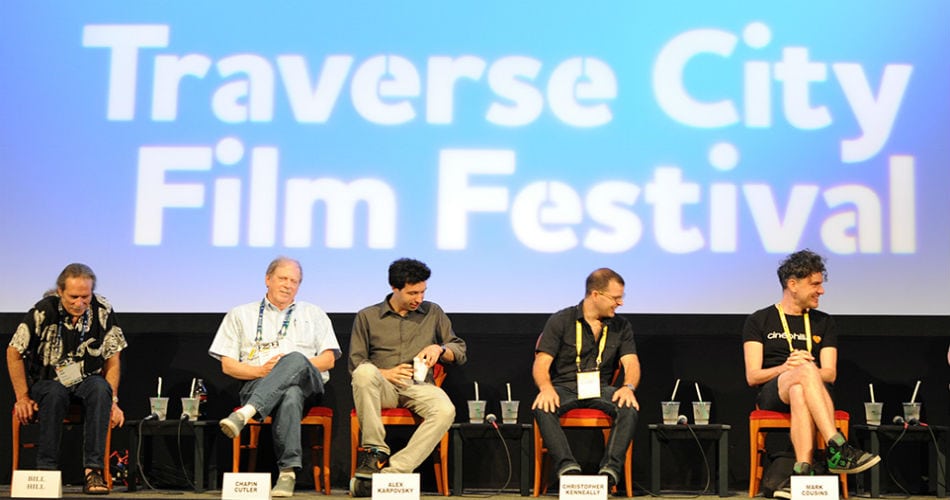 You are invited to come and participate in the part of your government that is set up to support the art of filmmaking. Attend the public meeting held bi-monthly by the Governor’s Michigan Film Office Advisory Council—TCFF founder Michael Moore is a member. Hear the latest news about the film industry in our fair state. Audience members are encouraged to come ask questions and share ideas.

Republican or Democrat, in the post-Watergate era of Edward Snowden, Julian Assange, and Bradley Manning, we know that the long tendrils of government and corporate money reach into every secret—and not so secret—place, often with devastating consequences. Our panel comes to the table with harrowing and instructive stories that will give pause to just about everyone, no matter where they stand on the political spectrum.

Thursday — Foreign Thursday: Not in America, 9:30 am, City Opera House

What does Traverse City look like on jetlag and cherry wine? How do film festivals and filmmaking vary between the Congo and the great American Midwest? One of our favorite parts of festival week is meeting the moviemakers who come from farflung corners of the globe to share their stories and visions with us while we share our fudge and Walmarts with them.

Friday — Music & Movies: The Revolution in Ones and Zeroes—One-on-One Conversation with Michael Moore and Tom Morello, 9:30 am, City Opera House

Don’t miss Michael Moore’s talk with one of the world’s leading guitarists and activists. A new member of the TCFF Board of Directors, Tom Morello (Rage Against the Machine, Audioslave, The Nightwatchman) spent the first part of this year touring with Bruce Springsteen, and continuing his work with Axis of Justice, which has earned him the Eleanor Roosevelt Human Rights Award. Moore and Morello share a passionate interest in the future of music and movies, not to mention the planet. Don’t miss this once in a lifetime chance to see two crusaders in intimate discussion.

Because there’s nothing a little laughter can’t fix, join Larry Charles, funny filmmakers, comedians Doug Benson and Geoff Tate, and friends for some morning wisecracks, witticisms, humor, and repartee as we explore the funny business of making comedy.

Michael Moore will sit down with Rick Prelinger, the visionary San Francisco-based archivist, filmmaker, and educator whose work inspired and informed “Roger & Me” 25 years ago, and each of Moore’s documentaries that followed. Get a peek at Prelinger’s “Yesterday and Tomorrow in Detroit,” which sold out four TCFF screenings, and find out more about his life’s work, the Prelinger Archives, a collection of 60,000 advertising, educational, industrial, and amateur films, including an astonishing assortment of films chronicling the City of Detroit.