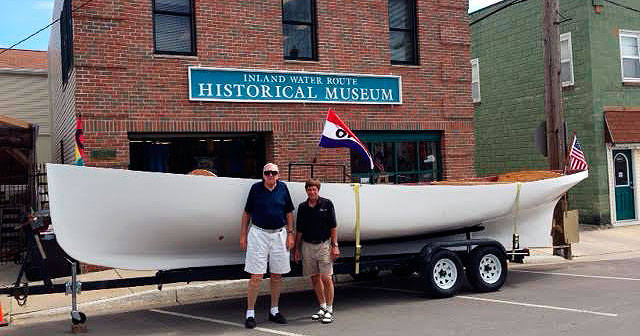 Give back to the The Inland Water Route Historical Society of Alanson (IWRHS), which is aiming to complete a project that will help visitors and locals fully experience Northern Michigan’s outdoors near Alanson.  The group is spearheading an effort to build a replica touring boat—like the ones of yesteryear that once charted the Crooked River—which will then enable public tours of the area waterways. Read on to learn what the IWRHS launch project will entail, and how you can get involved.

The reality of this project arose the same way most ideas do: as a dream. Mark Hill, president of the IWRHS, says the concept was a collaborative effort among the board members of the historical society. He says the launch committee grew up with knowledge of the history of touring vessels on the Inland Water Route of Michigan, and a main source of inspiration was the steamer Topinabee—a massive steamship at 72 feet that provided tours over 100 years ago from Oden to Mackinac Island, passing through Alanson and Cheboygan among other destinations. The Michigan Maritime Museum in South Haven has garnered success in a similar venture, a tour of the Black River via an electric-powered rover launch calling back to days when picnickers and vacationers took trips up river to resorts, pavilions and parks to fill lazy summer days with relaxing diversions. So, motivated by the Topinabee and the Lindy Lou, Hill and the launch committee have been planning and working since 2010 to realize this remarkable method of presenting Northern Michigan’s history: by cruising down the same shimmering waters of the Crooked River that passengers experienced ages ago. 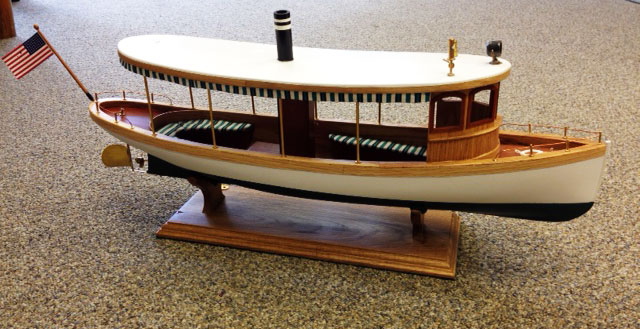 A model of the proposed river boat.

So far, the IWRHS has completed the first phase of the project out of four; although the hull, engine, drive-train, and trailer have been acquired, there is still a lot of work to be done before the launch is completed. As Hill put it, “One does not simply go out and purchase a launch replica.” The hull was acquired from Beckmann Boatshop Limited of Rhode Island, which also commissioned the Lindy Lou. The IWRHS is currently in Phase II of the launch project, which entails completing the hull and acquiring U.S. Coast Guard approval for operation of a passenger-carrying vessel. This means the hull will be sent up to Cedarville this fall to be completed by the Great Lakes Boat Building School, where they will add frame members, seating, cockpit covers, helm, flooring, trim, and more. Phase II also requires the hiring of a naval architect to ensure the construction is up to snuff and the passing of a Coast Guard regulated stability test, which Hill says is the most crucial aspect; essentially the boat will be weighted on either side to simulate what the vessel has the capacity to carry. The IWRHS has also been in discussion with the village of Alanson to construct a period-style boathouse and already have the footprint in design in place, hoping to complete construction in two years time.

Private donors have contributed nearly $36,000 to assist the completion of Phase I. The IWRHS’ quote to finish the launch project is $65,000, and they need all the help they can get.

Phase III is the actual use of the vessel and implementation of routes, timing, costs, personnel, and maintenance, projected for the Summer of 2015. Phase IV is the launch project going public, and will is on schedule to completed no later than 2016. Hill says you can expect youth tours informing kiddos of the ecological makeup of the region as well as local history, tours for the general public, sunset tours, and even marriage proposal tours.

For more information or to donate to the IWRHS for the launch project, please visit IWRHS.Wordpress.com, or contact IWRHS President Mark Hill at 231.557.2205.