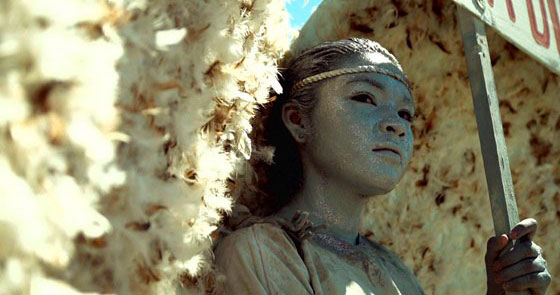 Take a cinematic journey in pursuit of the infinite where you’ll encounter men and machines dedicated to exploring the origin of the cosmos and our existence. Enormous telescopes in the desert, supercomputers, gigantic particle accelerators—no effort is too great to satisfy the human thirst for knowledge, to finally understand the secret of infinity. We visit the abandoned “nitrate town” of Pisagua, the ancient Atacama Giant geoglyph, the massive ALMA radio telescope project, Area 51 military base in Nevada, the Cosmic Ray Division lab in Armenia, and large-scale astronomy projects in the deserts of New Mexico and Arizona. We listen to interviews with leading astronomers, physicists, even the emeritus director from the Vatican Observatory, who present a range of theories about the mysterious cosmos. Meanwhile, Turkish physicist and writer Asli Erdogan contemplates the irony inherent in our obsessive search to know why we are here. Where do we come from, what are we, and where do we go?

Ninety percent of the world’s goods are exchanged through the global shipping trade, out of sight and out of mind on the forgotten spaces of the sea. Filmmakers Allan Sekula and Noël Burch posit that the sea is capitalism’s global trading floor writ large in this wide-ranging essay documentary, which follows a very American invention from the 1950s, the cargo container, aboard ships, barges, trains, and trucks as it covers the planet. We meet the people who run the global transport system—workers, engineers, planners, politicians; the villagers in Holland and Belgium who are forced to give up their land; truck drivers in Los Angeles being paid less than minimum wage; seafarers aboard mega-ships shuttling between Asia and Europe; and factory workers in China, whose low wages are key to the larger puzzle.

In 1970, at the peak of the Yugoslavian “Black Wave,” a young filmmaker named Karpo Godina took a trip through the flat hinterland of Vojvodina with his camera. Much of the resulting road film has been lost to time, but fortunately for experimental film lovers everywhere, filmmaker Matjaz Ivanisin saved the few original fragments left of the film, and 40 years later took his own camera on a modern-day journey retracing Godina’s original path. He talked to people Godina met during his travels, recording their memories, their progeny, and their contemporary way of life. The resulting film is richly multi-layered, with period folk music augmenting its meditation on the local village culture and inhabitants of five villages in what was once rural Yugoslavia.

Winner of the Michael Moore Award for Best Documentary at this year’s Ann Arbor Film Festival, “Purgatorio” captures the brutal beauty of the border and the people caught in its spell, presenting a stunning mosaic of compelling characters and broken landscapes. Rodrigo Reyes’ eye-opening documentary offers a thoughtful portrait of the US-Mexico border with coroners, dog-catchers, police, border-crossers, and others on both sides, tying disparate stories together through stunning imagery that depicts the border as an almost mythic place. Concerned mainly with the human implications of defining and enforcing a line between two nations, “Purgatorio” is a searing, horrifying, at times starkly haunting, and dream-like documentary that reimagines the border as a surreal place where spellbound residents are stuck between perception and reality.

The experimental films that moved us most this year have been packed into this rich, deep collection. “Single Stream” takes us into the heart of a Boston recycling facility where hundreds of tons of refuse are sorted daily; “BIRDS” explores the life of birds in urban habitats; a two and a half year old boy revels in all things tiny and huge on and around a farm in “Strawberries in the Summertime;” and in “Mystery,” they say that if you put your ear to the back of his neck, you can hear the Virgin speak.

We tip our hats to a great Michigan film festival to the south—the venerable Ann Arbor Film Festival, now in its 52nd year. Some of the finest experimental films in the world screen at AAFF, and we’ve chosen our favorites to play in this not-to-be-missed program. Take a walk through Berlin in “Der Spaziergang;” trawl for sand deep in the river bed in the award winning “Lagos Sand Merchants;” see Bill O’Reilly high art in “The Reality Factory;” and experience a one-of-a-kind cinematic experience with “Eleven Forty Seven.”

Take a stroll through the streets of Detroit as they once were when Rick Prelinger presents his program of educational, industrial, and home movies made in Detroit from 1925-1976. The San Francisco-based archivist, filmmaker, and educator will moderate interactive screenings of the program during which audiences are encouraged to yell out when they recognize specific locations or when they have hints that can help date films. Audience members will also be asked to let him make copies of home movies or other films they may have for his Detroit-based films collection. The Traverse City Film Festival screenings feature some works from Prelinger’s past compilations (including a priceless reel of a man’s walk past Grand River businesses in the early 1950s) and many new finds, including several home movies from Motown neighborhoods, and a short film about the city’s renaissance made by the City of Detroit circa 1968.