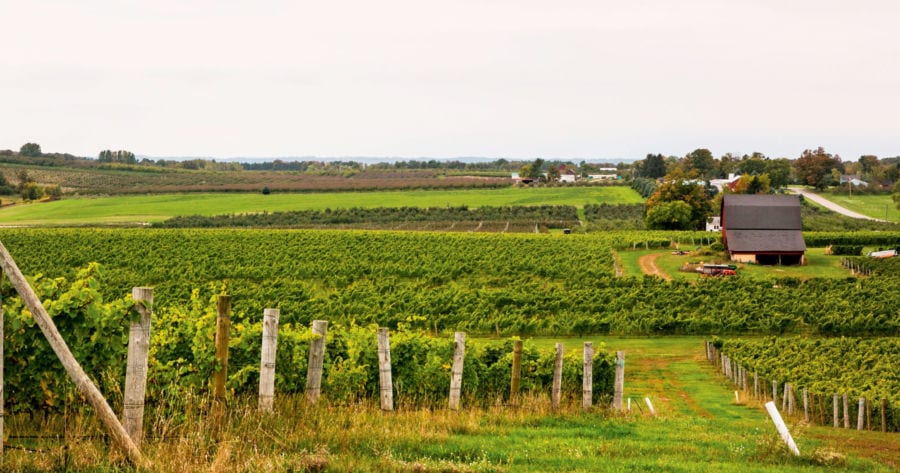 Chateau Grand Traverse on Traverse City’s Old Mission Peninsula has been a staple of the Northern Michigan wine industry since the winery’s founding in 1974. Read on to discover how the winery has aged to become a favorite in both Michigan and abroad (think China!).

This article is featured in the June 2014 issue of Traverse, Northern Michigan’s Magazine.

To an unknowing eye, the living is easy on this early summer weekend at Chateau Grand Traverse. Beside symmetrically undulating rows of riesling under the bright June sky, throngs of thirsty wine tourists load cases into their trunks. In an adjacent warehouse a forklift stacks pallets bound for Monday morning semi transit to markets across the country. Celebrating its 40th anniversary and prospering under the leadership of president Edward (Eddie) O’Keefe III and his brother, vice president Sean O’Keefe, the family’s second generation of oeno-entrepreneurs, Chateau Grand Traverse is ground zero for Northwest Michigan’s exploding wine culture and fast becoming a benchmark for world-class riesling. 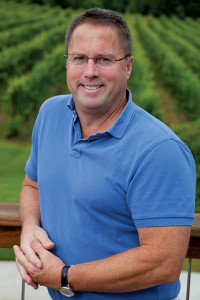 Peeling back the lacquer, however, reveals a compelling 40-year story that is itself the history of Northwest Michigan’s wine industry. Chateau Grand Traverse was founded in 1974 by family patriarch and local wine pioneer Ed O’Keefe Jr., whose struggles against market forces and Mother Nature sometimes saw his dream poised on the precipice of ruin. “Starting out was very difficult,” says president Eddie of his family’s struggles to get established. “Awareness of and demand for Michigan wines wasn’t yet established. Interest rates in the 1980s were at 22 percent, and banks were calling in their agricultural loans. We would rent box trucks, load up pallets by hand and spend the next two days driving all over the state delivering wine to make payroll.” The brand gained traction and built a reliable in-state distribution network, and the winery began to take off in 1992 with exhilarating vertical growth in sales and production. Then came 1995 and 1996, two of the coldest Northern Michigan winters in the last century, with weeks of sustained subzero temperatures that effectively wiped out two entire vintages.

Without access to Michigan fruit, the O’Keefes were forced to innovate to keep their winery alive and sought out grape growers in Washington State to supply fruit for a new label, Grand Traverse Select. The nonvintage wine carries a generic American appellation and a competitive price point that bridged the gap while the winery’s Old Mission vineyards recovered from the wintry devastation.

The Grand Traverse Select brand endures and is now comprised of about 40% fruit from the estate’s local holdings and gives the winery access to large retail outlets like Sam’s Club and Costco as well as grocery store chains statewide. While detractors and other wineries often use this point to try and differentiate themselves from Chateau Grand Traverse, whose production exceeded 100,000 cases in 2013, the O’Keefe’s do not shy away from the facts of their success. “New wineries sometimes like to take potshots at us,” Sean O’Keefe explains, “but everyone goes through the same sort of evolution on their own scale. They make business decisions and realize once that yolk sack of initial cash runs out you have to sustain yourself.”

“This is our business and our livelihood,” Eddie adds. “We’ve had to diversify in order to succeed against market demands and natural disasters. We make wines that are available at Sam’s Club and Meijer, and we make wines that are available on the best wine lists in Chicago and Metro Detroit.” This broad market exposure and wide range of styles has established Chateau Grand Traverse as the seventh largest of all wine brands sold in Michigan, creating a space for Northwest Michigan wines alongside über-visible household California names like Kendall Jackson and Ménage à Trois.

With Eddie O’Keefe’s visionary business acumen driving the winery’s commercial verve, his younger brother, Sean, harnesses the winery’s resources to pursue an almost antithetical vision: CGT Eclectic, a 6,000-case riesling-centric microwinery that has caught the attention of some of the world’s top wine critics and whose labels appear on cutting edge winelists in Chicago, New York and Washington, D.C. While he and Eddie’s perspectives are often at odds, Sean acknowledges that a symbiosis between their analytical and artistic sensibilities propels the winery’s success. “My brother and I do have very different visions but because we’re both owners, we rely on one another. I couldn’t make these wines without the backing of our infrastructure and resources.”

After completing undergraduate work at University of Michigan, Sean moved to Germany, where he spent two and a half years studying winemaking and viticulture at FA Geisenheim, described by Sean as “the Hogwarts of riesling.” This intensive oeno-immersion connected Sean with legendary riesling luminaries like Helmut Donnhoff and Johannes Leitz, whose philosophies and methods guided Sean’s decisions at Chateau Grand Traverse when he returned in 1998.

While Sean’s CGT Eclectic brand stands apart with edgy artistic labels and premium cerebral wines like a vin gris of pinot noir, Laika, made from the Austrian varietal grüner veltliner, and Ship of Fools, an homage to traditional Alsatian pinot blanc–based blends, it’s riesling that Sean maintains is Northwest Michigan’s keystone varietal. “Riesling. Riesling. Riesling. That’s the varietal that really grows here,” Sean says, drawing off a tank sample of 2013’s Whole Cluster Riesling. Wineries have been reluctant to take up that mantle, but I really believe it’s our best chance to compete on the world stage.”

The world stage has taken notice, as Food & Wine magazine dubbed the Chateau Grand Traverse Whole Cluster Riesling one of its top ten editor’s picks in 2011, and revered international wine critic Jancis Robinson made O’Keefe’s 2010 Lot 49 Riesling her “wine of the week” in 2012, later singling out the winery in her book, American Wine. Chateau Grand Traverse was recently lauded on NPR by riesling guru Stuart Pigott, and is identified as a world class riesling producer in Sotheby’s Encyclopedia of Wine.

Sean takes these accolades and the exploding success of the area’s riesling overall as a matter of course owed to newly enlightened viticultural practices and terrific terroir.

“A lot of winemakers want to play around with wine but making riesling is learning about how to do as little as possible. It truly happens in the vineyard,” Sean says. With 125 acres under vine and an additional 80 acres under long-term contract, Chateau Grand Traverse has unmatched access to a diversity of vineyard sites to integrate into its riesling program, a key component to the winery’s consistent quality. “We have vineyard land from the base of [Old Mission] Peninsula to the lighthouse,” Sean explains. “This allows us to blend from the microclimates to achieve balance in our rieslings whether the vintage is exceptionally hot or cool.” Fruit from north-facing slopes near the tip of the peninsula add acidity in warmer years, whereas inland vineyards provide longer ripening during colder harvests.

While individual site exposure is important to the character of his family’s rieslings, Sean is quick to stress that the omnipresent sandy soils and the moderating influence of water are what truly enable the region to grow world-class riesling. “Glaciation carved up the land here and dragged everything away so we’re working with very young soils,” Sean says, walking one of his vineyard plots. “The sand’s ability to drain water, and the thermals cycling up from the bays, creating lake-effect snow, keep water from freezing in the roots and killing the vines. Sandy soils produce delicate aromas and allow our wines to have finesse, while the clay tends to bring more mid-body and imparts a peachy character.”

While Sean maintains the Old World maxim that great wine is made in the vineyard, he and Chateau Grand Traverse head winemaker, Bernd Croissant, are as meticulous in the winery as they are in the vineyard, favoring minimal yeast inoculations, long drawn-out fermentations and extended contact between the wine and its lees to impart texture and complexity.

When asked about sweetness in his rieslings, Sean tries to reconcile his desire as an oenophile to drink drier wines and the market’s undeniable appetite for sugar. “As much as I’d like to make the spin that everybody’s drinking drier, the focus remains late harvest and semi-dry style rieslings. I think as an industry we need to stop talking down sweet and start making good wines in that style.” Good wines in that style are defined by their balance between sweetness and acidity, and nowhere is that duality better accessed than in cool climates like this. “No one bites into a perfectly ripe peach and says ‘ewww,’ ” Sean says. “I encourage people to experiment with the whole spectrum of riesling, from late harvest down to bone dry. Find the level you’re comfortable with, and then try going down a notch [in sweetness] to pair with food.”

With market strength all across Michigan, 225 acres of vineyards and annual case production in the six figure metric, the O’Keefe brothers are aiming further afield for the winery’s next growth phase. Eddie currently serves as chairman of WineAmerica, the nation’s largest organization of commercial wineries—800 members—and has developed distribution partnerships in major national markets like New York City, Chicago and Washington, D.C., and realized years of work to establish an export division by shipping a container of Northern Michigan cherry wine to mainland China this April, with more to follow. Asked about the possible implications of the new venture, Eddie says, “I’m going to stick to the old American business mantra that if you aren’t growing you’re dying. The question we have to ask is, How big do we want to get?”

Sean meanwhile continues to develop the winery’s dialogue with top wine writers and sommeliers. “It’s absolutely crucial,” he says of building presence for Michigan wines outside of Michigan. “We need to get our wines into the best restaurants because once these wines are associated with top cuisine, we’ll get the legitimacy and national attention we deserve.”