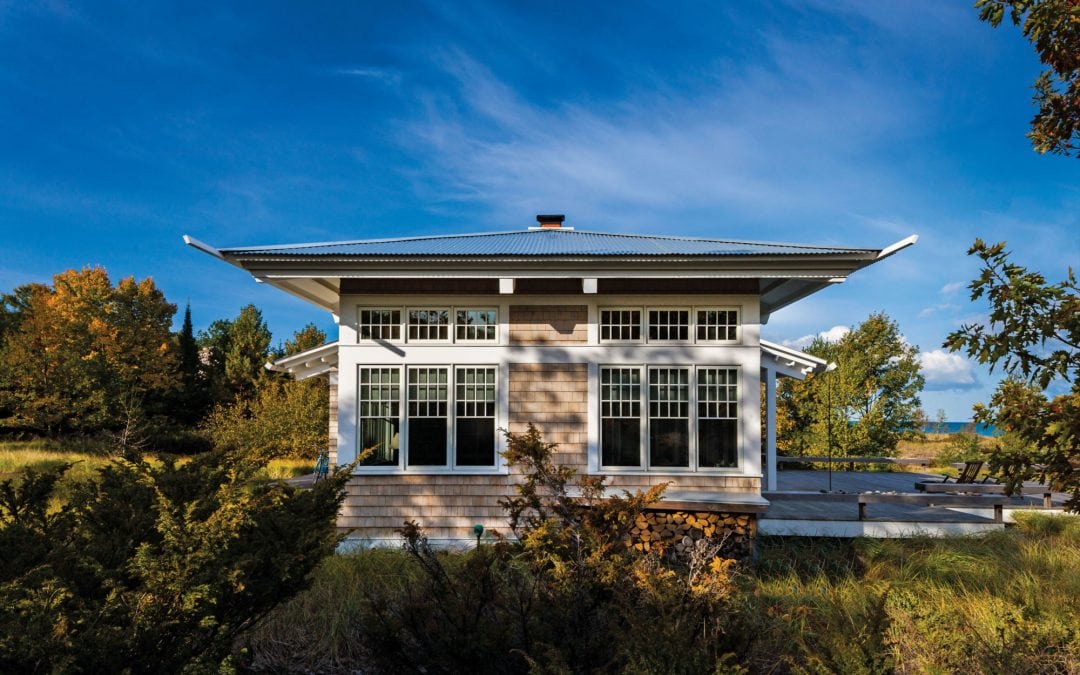 This Harbor Springs home on a bluff above Lake Michigan captures the essence of beach living.

Residential designer Fred Ball does a pretty fair job of camouflaging his widely respected design brilliance with a casual Hoosier drawl. His client, Susan Covatta, a Cincinnati girl, says, with Midwestern modesty, that she’s never been good at anything much, but maybe she does “have an eye.”

Don’t let their humility fool you. Together, this designer-client team conceptualized the inspired summer cottage that Susan owns with her husband, Tony. Perched on a Lake Michigan bluff north of Harbor Springs, the Covatta cottage is original, simple, fresh and disarmingly sophisticated. Above all, it is what it was meant to be: a haven for capturing lake light, breezes, vistas and the relaxation that comes with that ambiance. 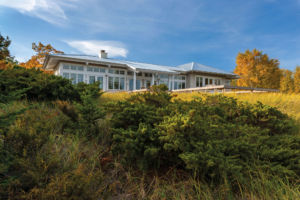 The story of the house’s design dates back to a dark split-level that had graced the exquisite bluff-top property since the late 1950s—and that had, according to Tony, “seen better days” by the time the couple started thinking renovation. They’d owned the place for 25 years, but had summered in it for about 35 years, so they were understandably attached to the dowdy cottage—filled with beachside memories as it was. So they began the arduous process of talking with builders and designers about the possibility of renovating it. Everybody they talked to said it would take a boggling amount of work and money to transform the house.

During his inspection on a rainy, dreary day, Fred didn’t tell them anything different. In fact, he was even more pointed: After coming up from the lower level with its cramped two bedrooms and laundry room, he declared, “That’s the most depressing space I’ve ever been in.”

“I could tell we’d found the right architect,” Susan says with a laugh. While it was obvious to the couple that Fred was going to be upfront with them, they also intuited that Fred understood what they liked and what they didn’t like about the floor plan. In the end, with Fred’s blessing, the couple tore down the old structure and built new. 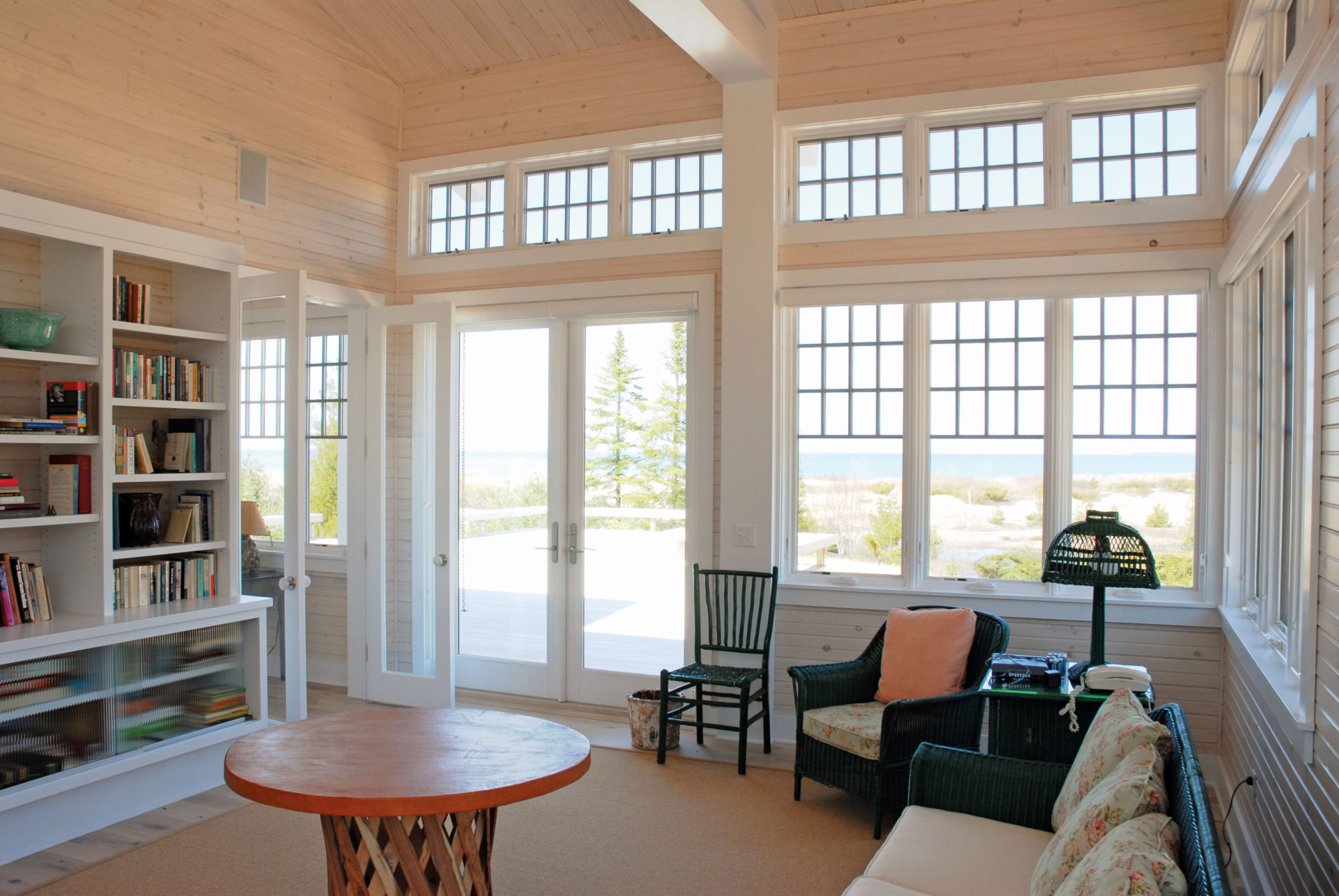 In the design of the new structure, Fred preserved the shotgun simplicity of the old cottage, with several major exceptions: He moved the footprint closer to the edge of the bluff and then flipped it left to right to maximize the view of the dunes.

Fred also delivered a novel take on the split-level idea, placing the split at one end of the cottage, instead of at the foyer as is more traditional. The result is an amazing six bedrooms tucked quietly away from the serene ground-floor public area that houses the kitchen, dining and living area and sunny, book-lined library.

With the home’s shell agreed upon, Fred and Susan focused their dialogue on the interior. Much of their conversation revolved around the Swedish beach houses Susan had seen while traveling in Scandinavia with Tony. Susan was enamored with the way the cottages’ fresh, whitewashed surfaces played up the seashore light while providing the perfect backdrop for the clean lines of mid-century modern Scandinavian furniture. 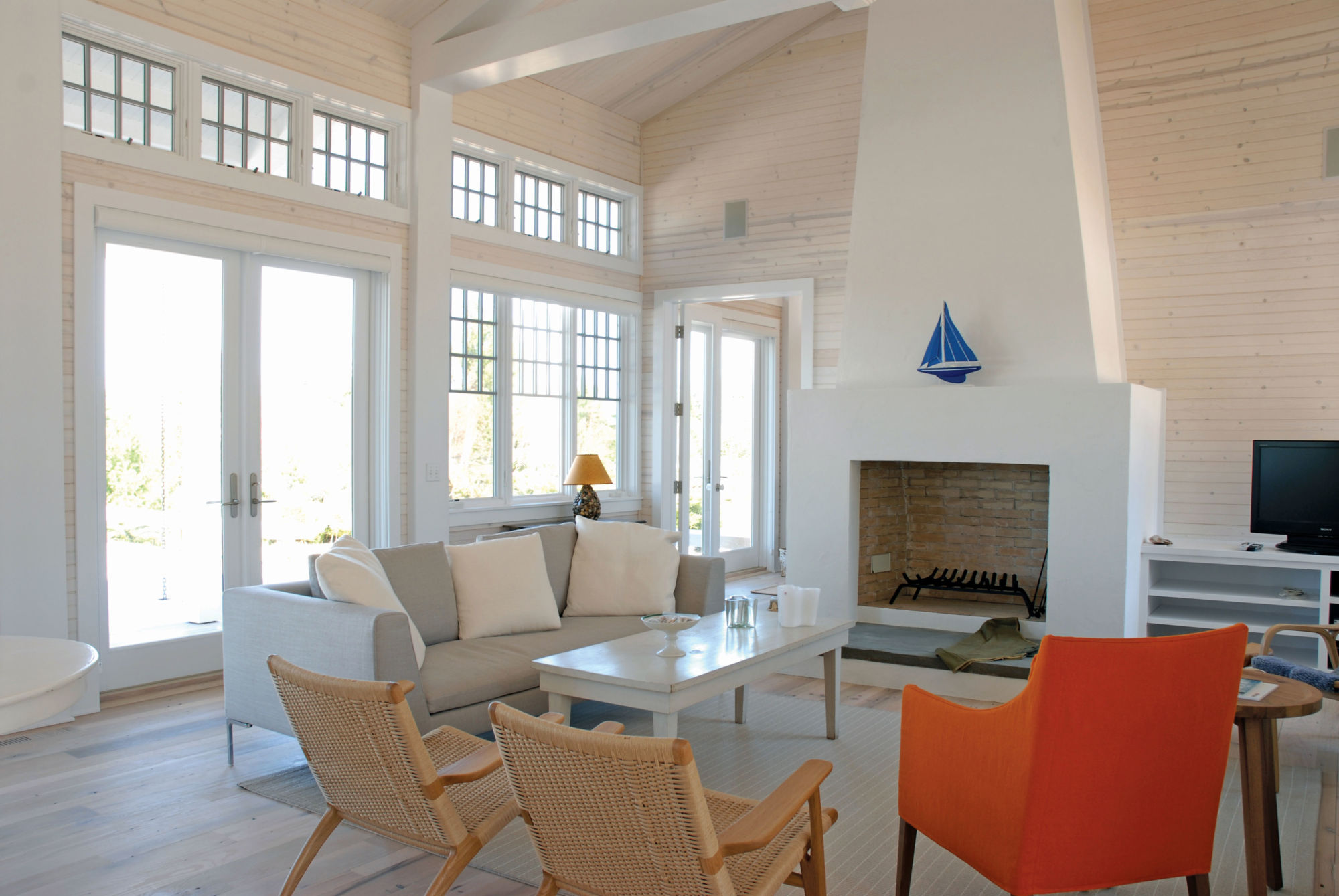 From its tawny-colored reclaimed, pickled oak floor to pine beadboard on the walls and ceilings, the interior speaks with an unmistakable Scandinavian inflection of warm wood and modern sensibilities. A cream-colored plaster fireplace parlays the shades-of-white theme, and a bank of French doors topped with transom windows running along the lakeside bathes the interior in that precious sea light. The transoms are mirrored on the opposite wall, a touch as elegant as it is functional: Cross ventilation through the sets of awning-style windows obviates the need for air conditioning.

Susan’s (mostly) mid-century modern furnishings round out the striking interior that is also marked by careful craftsmanship, a quality that the Covattas attribute to Scott Kennard’s team from Wentworth Builders. “Our house in Cincinnati was built by great workmen, but as good as they were, they were no match for Scott’s men,” Tony says, going on to describe coming upon one of the carpenters building the shelves in the library. “He made sure every board was absolutely perfect … smoothed them, caressed them, sighted along them. They built the entire house like that.” 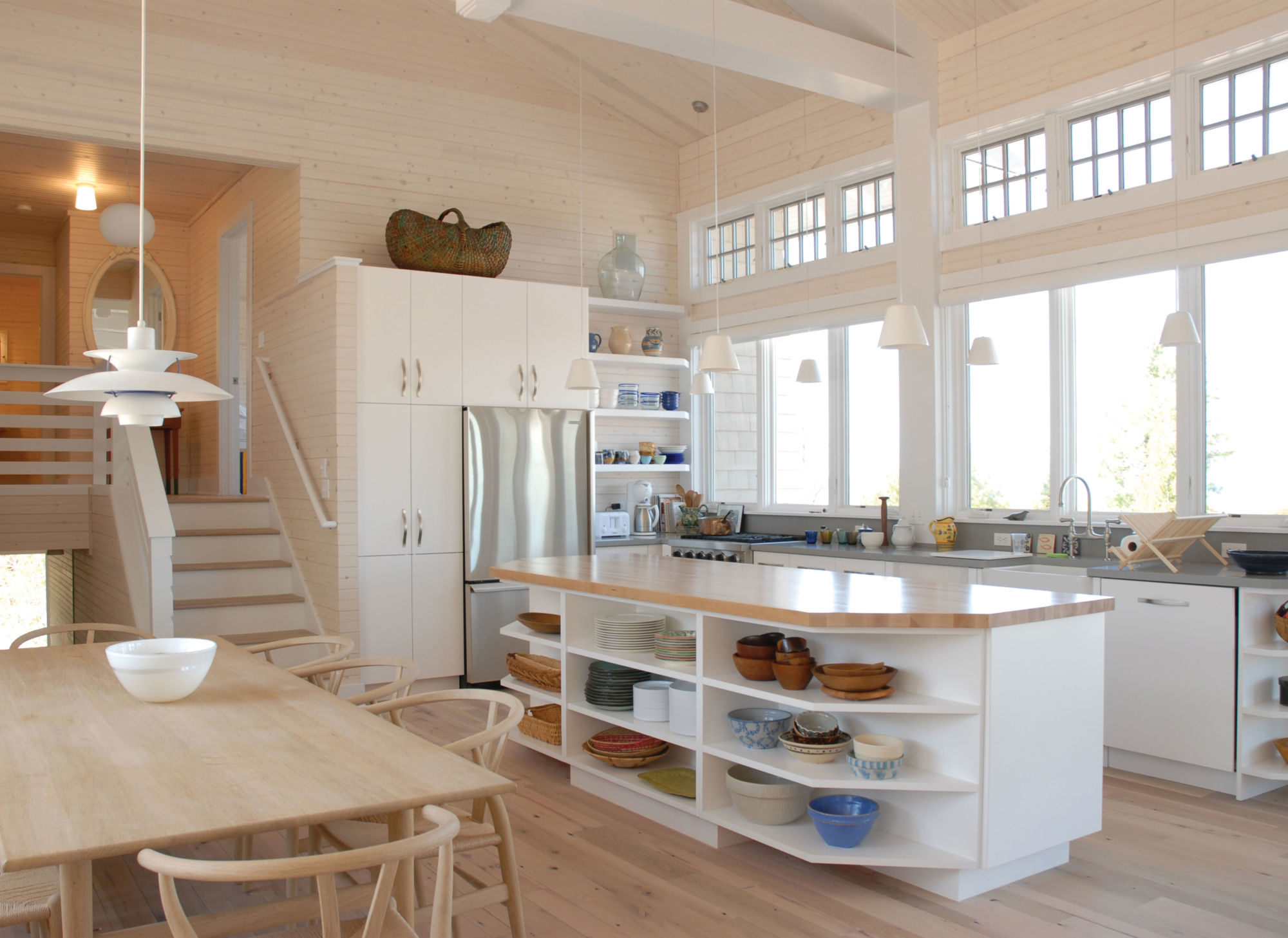 The home is wrapped in cedar shingles, a nod to Nantucket, a place that also figures into Susan’s lifetime of summer memories. The cottage’s landscaping consists mostly of a sea of dune grass plantings—swaying in the lake breezes, the bright green blades seeming to serenade the essential natural beauty of the Covatta’s summer cottage. 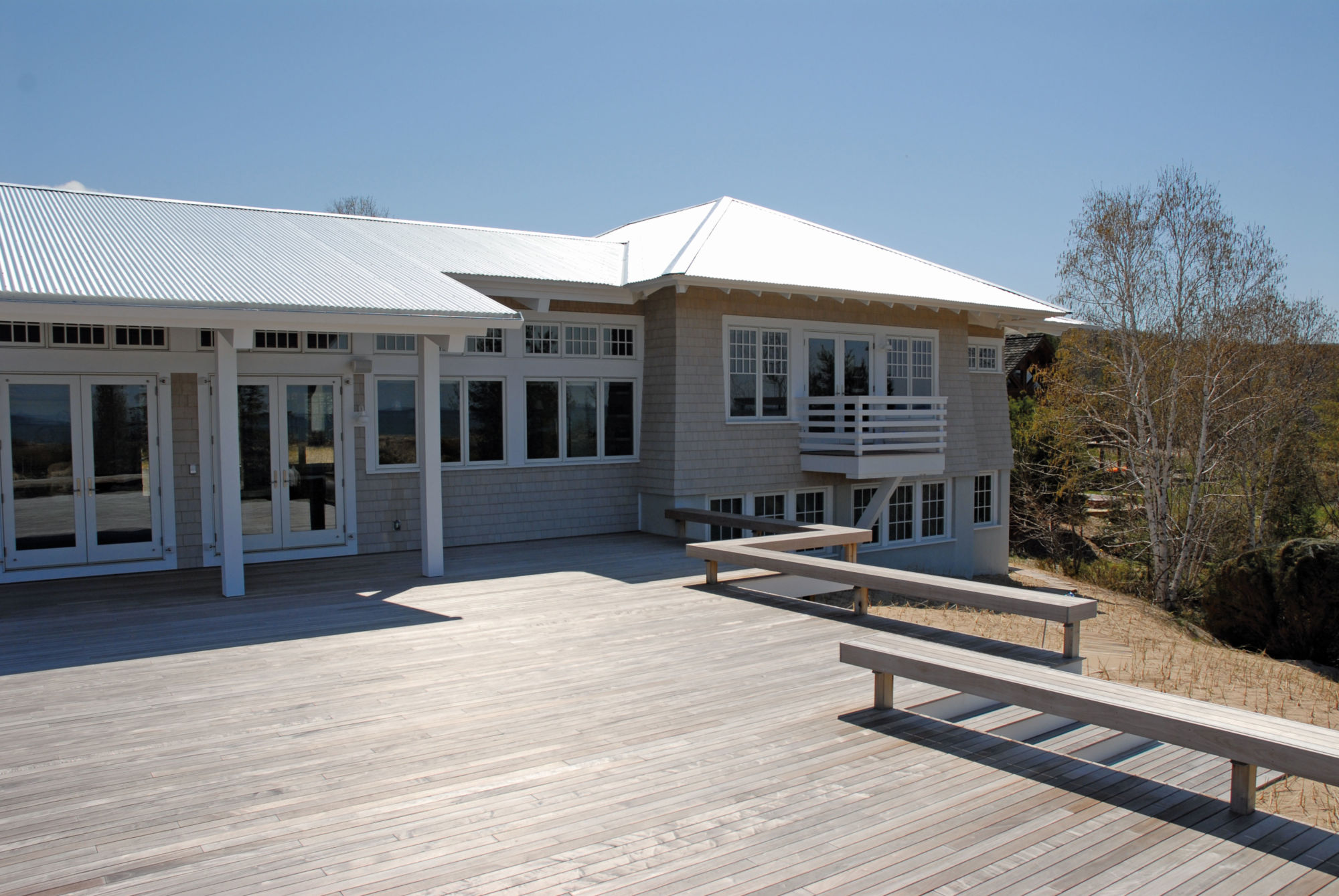