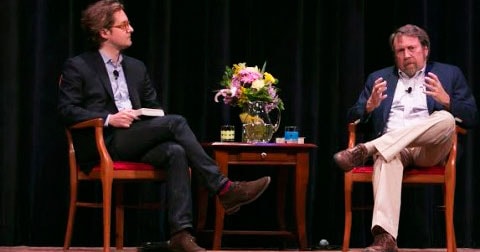 The Traverse City National Writers Series, mom and The Boys On The Boat and me:

A nonfiction story told well is a tender, pulsating thing: an avatar of real-life moments and emotions rendered in the brushwork of font. When the right story hits the right reader dead-on, this spirit diffuses into an enveloping, experiential dimension all its own.  Lofty words, yes. But if you are a reader, you know they are true.

And so it went with my mother and the book The Boys in the Boat, by Daniel James Brown.  While posting a press release for Brown’s upcoming appearance at the Traverse City National Writers Series on MyNorth.com, I realized this was a book my mother had to read. At 82, she is the last generation to have lived through the Great Depression and World War II—a dwindling number of elders who recall when fortitude was adulated and victory was pure.

The Boys in the Boat is the story of the nine underdog rowers from the University of Washington who captured a gold medal for the United States at the 1936 Olympics in Berlin—out from under Hitler’s evil, twitching mustache. It is an epic tale, told exquisitely by Brown, that captures the essence of an era. I got mom the book that day, she started reading it that night. Through that next week The Boys made themselves comfortable in our household, lounging in their khakis and button-down oxfords, politely snuffing out their cigarettes when we came into the room. Description by description, mom made them come alive, her eyes shuffling back eight decades of years, to stop at 1936, the year she was 4. In the kitchen one night with my teenage son and me, she described the lead character, Joe Rantz: tall, blonde, likeable. His mother died when he was a child, his father abandoned him as a pre-teen. Through her words, I imagined the face of a sweet, haunted boy, my thought-picture scented by the browning beef wafting from my cast iron skillet, and of my own son, hunched over his homework at the counter. I was loading the dishwasher when she jubilantly recounted how Hitler had stormed off the podium when The Boys beat Germany for the gold.

Days later, in anticipation of his upcoming appearance, Jill Tewlsey, executive director of the National Writers Series, sent an interview with Brown to our offices at Traverse Magazine and MyNorth. When I read this question and answer I dialed mom:

[Marci Branski, National Writers Series boad member]: Most readers want to know how an author decides what to write. In a Powell interview you said the story of The Boys in the Boat “walked into your living room.” What did you mean by that?

Brown: Well, about six years ago my neighbor, a lady I knew only as “Judy” at the time, came to my house and asked if I would come down to her place and meet her father. He was in the last couple months of his life and living under hospice care at Judy’s home. She had been reading one of my earlier books to him. He was enjoying it and wanted to meet me, so of course I went down the next day and met her dad, Joe Rantz. Joe and I talked about that earlier book for a while, and then he began to tell me an absolutely heart rending story about what he faced growing up during the Depression. Then he started talking about how he began to row crew at the University of Washington and how he and his crewmates had rowed for Olympic gold in Berlin in 1936, rowing against a German boat in front of Hitler and all the top Nazis. The story was so improbable, and so beautiful that by the time he was done he was in tears, Judy was in tears, and I was in tears. I started working on the book the next day.

“It was Joe Rantz … That was when he met Joe Rantz!” mom squeaked over the phone. I knew then that I would be taking her to see Brown on June 10th.

It was a lot for me to take the time out of my schedule that evening. Like so many of my generation, midlife has brought a tsunami of busyness and challenges. Through it all, my mother has been a bulwark of strength and inspiration to my son and me. Our Eleanor, our Bess, our Mamie; holding down our fort, cheering our successes.

And here is my story within a story. We loved Daniel James Brown at the City Opera House. His relaxed personality and gift for story shone through unobtrusive questioning by Lucas Wittman (a past editor at Newsweek and the Daily Beast). When Brown told of discovering Rantz’s crewing times still housed in the university’s archives, I shared his writer’s eureka moment.  It was clear in that karmic sort of way, that as sure as this was the book for mom, Brown was the right man to meet Joe Rantz and tell the story of The Boys on the Boat.

We left just a bit early—even for this octogenarian who walks two miles a day, takes two pilates classes a week and runs a yarn shop, the evening was getting a little long. As we whispered over our exit plan from near-front row seats she said: “Now how shall we do this?”

We clasped hands and she leaned a bit on my shoulder as we navigated down the rows.  I recall thinking that her hands have become just a bit thin now, and that I was very grateful that she and Brown and Rantz and the Traverse City National Writers Series had invited me in.