Todd and Brad Reed Photography, authors of Tuesdays with Todd & Brad Reed: A Michigan Tribute, received three gold medals in New York City book competition this past Wednesday. The spectacular Northern Michigan book features 400-pages of 1014 images all taken within 52 Tuesdays and over 30,000 miles of Michigan land. The Ludington-based father-son team won Gold in the categories of Cover Design and Interior Design at the Ben Franklin Awards ceremony in New York City along with a Gold IPPY award for Best Regional Book: Great Lakes Region.

Brad attended the Ben Franklin Awards ceremony in New York City with managers Rachel and Sarah. The award ceremonies were part of the World Book Expo, which occurred in New York City on Thursday, May 29th and Friday, May 30th, 2014.

Brad said that he wanted to dedicate the first award to his father. “I dedicated it to my dad for always believing in me and teaching me to be a dreamer and a go-getter and that if I had a dream, go make it happen. His saying is: dreams are goals with deadlines.” The Tuesdays project was a team effort that was originally conceived by Brad but wouldn’t have happened without the support of his father, Todd, pushing him to achieve his dreams.

The second award he dedicated to his older brother, Tad. “He’s a captain in the US Army. He was the company commander in Band of Brothers and was in Afghanistan when we were designing the book and getting it ready to go to press.” The book was a collaborative effort between Todd and Brad, as well as their entire crew, who were a large part in finishing the project.

Their receiving these awards in photography is an incredible honor, and Brad stated that they “feel excited that we are helping to promote the entire state. Michigan got a black eye with the auto industry and we feel like this was us doing our own part to help show the world how beautiful Michigan is.” The father-son duo also felt that the three golden book awards were just the beginning to the inclusion of photography into the art industry. “It’s just as powerful as painting, drawing or sculpting. It’s just a different way of showing the world.”

Their recent project, a Michigan-themed 2015 calendar, will be available in June, 2014. 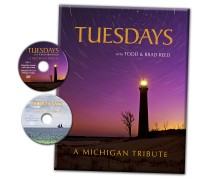