Q&A with Simon Joseph, Owner of Harvest in Traverse City 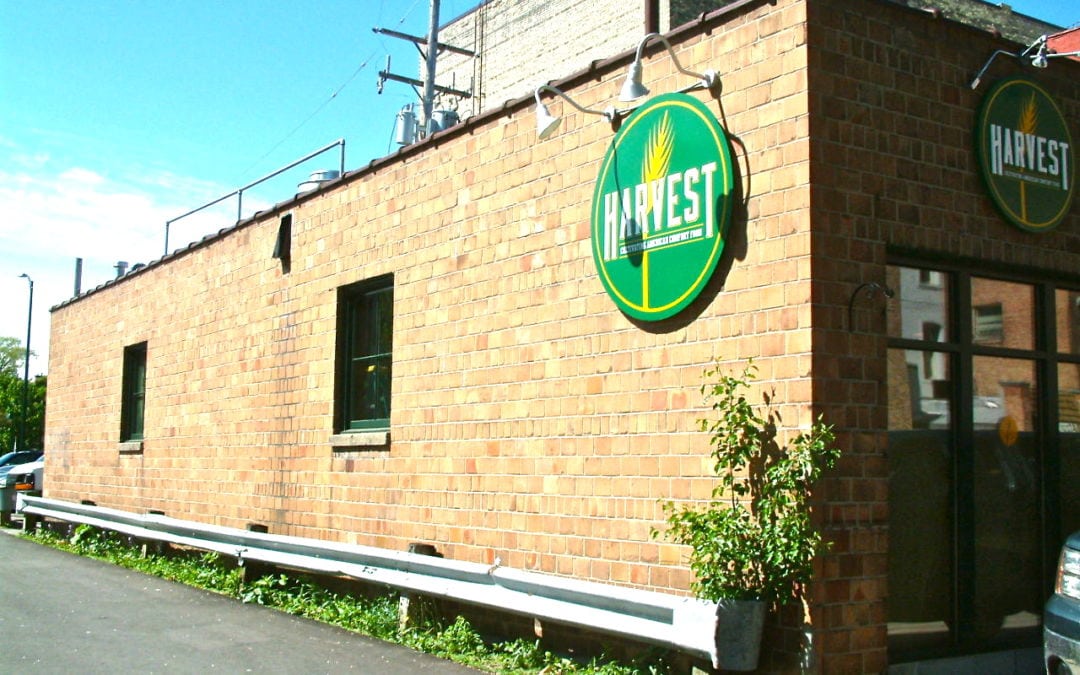 If you’ve driven past The Little Fleet, at the corner of Wellington and East Front St. on any given summer weekday around lunchtime, you’ve noticed a group of colorful trucks surrounded by people enjoying their lunches, socializing, and taking in some afternoon rays. One of these food trucks is Roaming Harvest, a food truck committed to serving local-focused foods and supporting the farm community in Traverse City. Common menu offerings, which change daily, can include pork, whitefish, and beef tacos, wraps, burritos, and vegetarian options. Now, the owner of Roaming Harvest, Simon Joseph, is opening up a restaurant in Traverse City, Harvest, in the alley between Front and State streets. Harvest, one of the many new Northern Michigan restaurants this summer, will open its doors sometime in June 2014.

Like its truck-twin, Harvest will focus on supporting local farms, but the restaurant promises a several twists to its menu that differentiates itself from Roaming Harvest. The contrast between the building’s distinctly industrial feel and brick detailing combined with its commitment to providing fresh food fast will help it to fill a niche in the Northern Michigan food & drink scene — fresh, inexpensive food served in a hip environment.

My North’s Adrienne Roberts sat down with Simon to get a sneak peak at Harvest’s menu and find out the reasoning behind his transition to brick and mortar.

Can you briefly profile Harvest?

Harvest is the new spin-off restaurant from Roaming Harvest, the food truck. It’s going to feature a similar menu. We’re going to have a section that actually is “Food Truck Favorites,” but with a full commercial kitchen, it’s going to allow us to branch out and do some new things. We’re sticking with the local, sustainable theme.

What made you decide to open a restaurant?

We were going to open another food truck to fill the demand, if you will, but the trick of it is food trucks aren’t that lucrative in the winter. It was that combined with the fact that this building actually opened up the day I decided that a restaurant was something to consider. I’ve always loved this building, too.

How has it been transitioning from a food truck to a restaurant? Do you think this transition is occurring more often?

The food truck, in this economy, is a great way for people to test their brand, which is what we did. You’re beta testing your brand and you’re finding out if people really are going to like what you’re doing. From there, it’s a natural evolution. Instead of just branching out, you’re growing.

How did you get the idea to start a food truck in the first place?

Food trucks are obviously very, very popular around the country. There was a niche, here, to be filled.

I know that you use local, fresh food. Is that something that’s important to you personally?

Yes. Bringing local food into the restaurant scene is important because Michigan as a whole has suffered. The more money that we can just keep here, the better. Our motto is we start with local, then sustainable, then organic, in that order of importance. We really try. If we can’t get it here, then we get it elsewhere and we just try to be very mindful of where it’s coming from.

Is there anything you’re particularly excited about on the menu?

We’re going to add a category of sliders to the menu. They’re going to be very unique. One is a Jambalaya Joe. So think Sloppy Joe, but its going to be a chicken jambalaya with peppers on a sweet potato roll.

Why did you choose to open a restaurant in Traverse City?

I love it here. I’m grew up not far from here and my wife grew up in town. After traveling around the country and cooking in a lot of places, I realized that [Traverse City] is an awesome place to be. It is truly a unique, great place. Combine that with the fact that it’s an up-and-coming great food destination and I think that it’s just a great fit for me.

Click the arrow in the upper-right corner to enlarge; hit “Escape” key to exit full-screen.