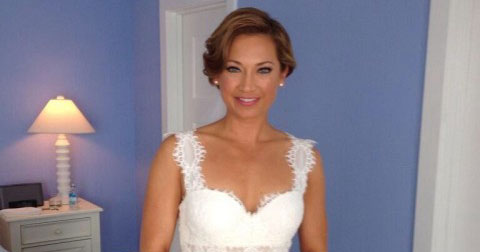 We checked in with wedding planner Francesco Bilotto to get the behind-the-scenes story on Ginger Zee’s Northern Michigan wedding at the Inn at Bay Harbor, near Petoskey.

AS Wedding Planner You were front and center for all the action: Overall impression?

The wedding was by far one of the most magical that I have been a part of. The guests’ eyes were filled with joy and wonderment. Ginger and Ben are a great couple and to have this intimate affair take place on the beautiful, beautiful shores of Lake Michigan … it was just the perfect storm.

Ah, but as you like to say, every fairy tale has a villain …

… and you have these little black flies …. Yes, they were not supposed to be there. Cocktails and dancing were set on the terrace and I had all white chairs and white linens and these bugs were everywhere. It looked like polka dots everywhere. I always wear white because, you know, if the groom doesn’t show I can throw on tails and step in, or if the bride is missing I can put on a veil. But I looked like I was wearing black polka dots!

Uh Oh!  They are definitely not Northern Michigan’s best ambassadors! That must have called for quick thinking!

The night before I had to change just about everything. I switched it out to a dark navy blue and switched out the chairs to a darker chair and also brought in some darker club chairs and created a dark, rich Ralph Lauren vibe that basically camouflaged all of these bugs.

Fortunately we were able to execute this thanks to the power of the Inn at Bay Harbor. Lindsey at the inn was amazing. In New York it is easy for me to make last minute changes. But there on the shores we had to call in a few favors.  The end result was that the dark blue was just beautiful. It had this casual but yet sophisticated coastal vibe. Ginger and I both love the Ralph Lauren aesthetic. To have this all-American woman married in Michigan, a state that to me is the epitome of what America is all about. It was phenomenal.

But what about the outdoor ceremony—there would have been no way to camouflage those bugs on Ginger’s white gown?

Leading up to the day, the Thursday before, the Friday before, they were trying to scout a new ceremony location because the flies were on the beach, they were on the lawn. The staff at the Inn [at Bay Harbor] was wonderful, really the unsung heroes here.  They sprayed, they were ready to put fans in. In the end, we changed the ceremony location three times.  We went from lawn and trees to the beach and then finally to the chess lawn.  That’s this very manicured lawn surrounding an outdoor chessboard that sits on a bluff above the lake—away from most of the flies.

How’d it turn out?

It was magnificent; breathtaking and poignant.

There were a few flies. But nothing compared to the beauty and thought that were put into the ceremony.  Leading up to it, whenever people voiced concern about the upset about the flies I started saying, Listen, I flew these flies in, they are Ginger’s favorite flies and they are better than rice.

Whew, okay, maybe we can stop talking about the flies now.  So how did Ginger Begin her wedding day?

With a polar plunge, believe it or not. I looked out my suite window and there’s Ginger and Ben and some family members doing the polar plunge. I thought that was so cool. The water was probably chilly that day.

Ginger proved her Northern Michigan stripes there—and Ben earned his! Our Lake Michigan polar ice cap has barely melted! But through this mini ice-age of a winter, the wedding experts in Petoskey (Michael Murphy IV Photography, Bloom Floral Design, Tableau Events and Simply Sweet by Jessica) were your team on-the-ground. Want to give them a shoutout?

What I’ve seen of the photographs so far is fantastic. Jennifer of Bloom Floral Design was equipped with extra to trouble shoot anything. Her branding, delivery, execution and scale were exquisite. The flowers looked like something I would have found at the Four Seasons in Paris. She is really something special. Sheila at Tableau went out of her way with the signage, the monogrammed chair covers (to be turned into pillows now that the wedding is over … my idea but she executed perfectly), the guest book, the cones that held the biodegradable confetti. She really was the thread that weaved so many parts together. And can we talk about the cake? It was served on a vintage cake plate set on a rustic wine barrel, which was a nice photo opp. The cake itself was to die for—it was carrot cake with red velvet and vanilla on top. It had a beautiful, rugged homemade look. I am still dreaming about it.

This Northern Michigan wedding mafia as I called them, they are not to be messed with. You have the real deal up there.

Tell us About the reception highlights?

I had the privilege of bringing Ginger in to the dinner first. She um, almost made an ugly cry? She was so blessed and impressed with how the table statements turned out. She kept saying Francesco this is too much! It was a side of her that I hadn’t even seen. She’d had so many joyful moments, so for her to find the physical expression that she exuded, it was a moment I will always cherish.

After dinner, Ginger’s brother’s band, The Outer Vibe, just rocked it. I mean they brought the place down. I said to her mother, what is going on with this DNA that you have such talented kids?

And how did the day wind down?

People were out by the firepit making s’mores. The bugs were gone. I think they got the hint.

You stayed at the Inn at Bay Harbor along with the wedding party. What did you them of your digs?

I walked in and that view … it’s all sky and water. The two blues touch each other and your heart just rests on that fine line. The décor is perfect:  blue walls and carpet, white coastal furniture.  Where am I French Riviera?  Everything was just incredible.  Everything I needed was there right down to the microwave and fridge. I just wanted to move in.

Did you get out and about in Petoskey?

Yes, we ate at the Twisted Olive one night. It was incredible food and service. We had a Michigan wine that was out of this world. I just loved Petoskey. It looks like a stage set to me—even that downtown JC Penny! It just speaks to the purity and Americana and the whole red, white and blue of the USA I didn’t want to leave. Literally I am still dreaming of it.