The Credentials of a Fish Car, an Essay on Fishing 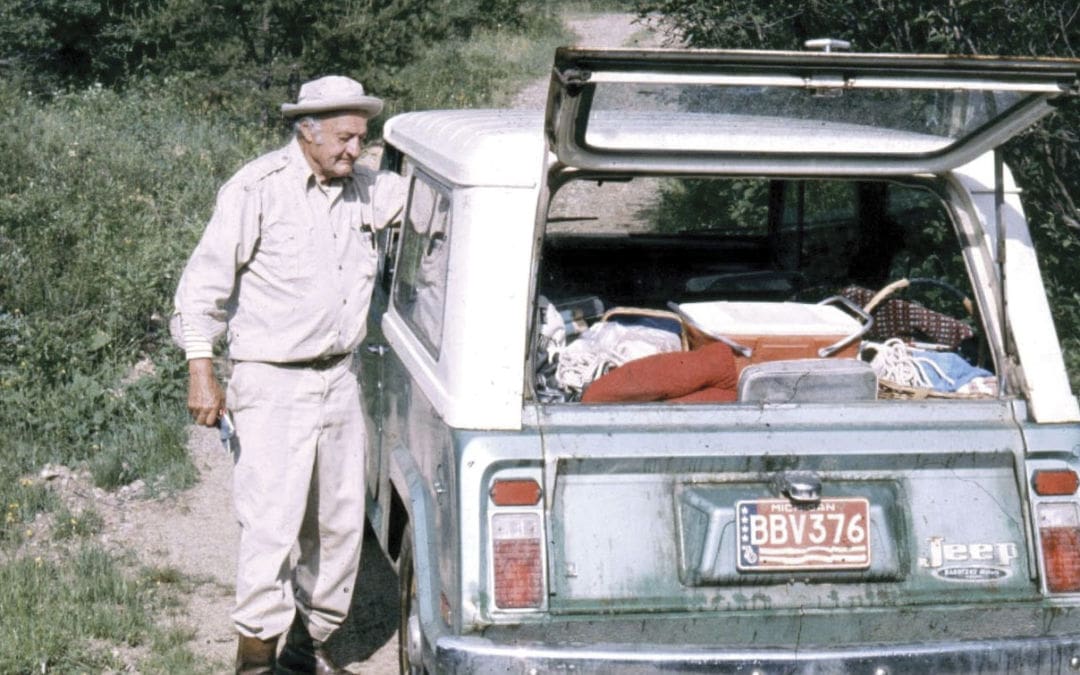 What kinds of Northern Michigan fishing adventures does a car need to navigate to become a ‘fish car’?  How many miles of two tracking through Northern Michigan’s outdoors does it take to elevate something so banal as a car to that upper automotive echelon?  MyNorth contributor James McCullough, a teacher at North Central Michigan College, recounts his first fish car.  The following essay was first featured in the April 2014 issue of Traverse, Northern Michigan’s Magazine.

Fly Fisherman Magazine sponsors an annual Robert Traver (John Voelker) Writing Contest that I’m not interested in, because I decided, What do they know? Yet as an extension of the contest, one year they wanted to select a photo of the ideal “Fish Car,” the title Voelker gave his equipment-laden Jeep.

So, after crashing my fish car through overgrown brush, slamming on a rock so hard my hand hurt on the stick shift, and fording a beaver pond, I shot an image of my bruised up and decidedly unsexy Subaru Legacy, canoe on top, at Frenchman’s Pond, Voelker’s secret brook trout Shangri-La. How much more fish car could you want? Then they announced the winning image: some Gucci-esque, shiny Land Rover, gilded with rod racks and other state-of-the-art hoo-ha—a suburban notion of what fishermen should drive to the river.

A fish car earns credentials, including a history of fearless attempts to reach barely accessible waters, dings from such attempts, a standard shift transmission, and the love and gratitude of the owner; not for its appearance, but for its faithful companionship, longevity, and partnership in the pursuit of backwoods access. Fish cars have stories. The Subaru at the pond earned its place in the lineage by taking me on countless occasions through brush and muck, and never getting stuck. It took me faithfully on thousands of miles of two track over the course of 10 years, and in the end, the motor still ran, but it drove funny so couldn’t be sold for use. I called a scrap metal guy, but when he jacked the lift under the car the rusted frame crushed under its own weight. I’d been driving an accordion.

That was a fish car. 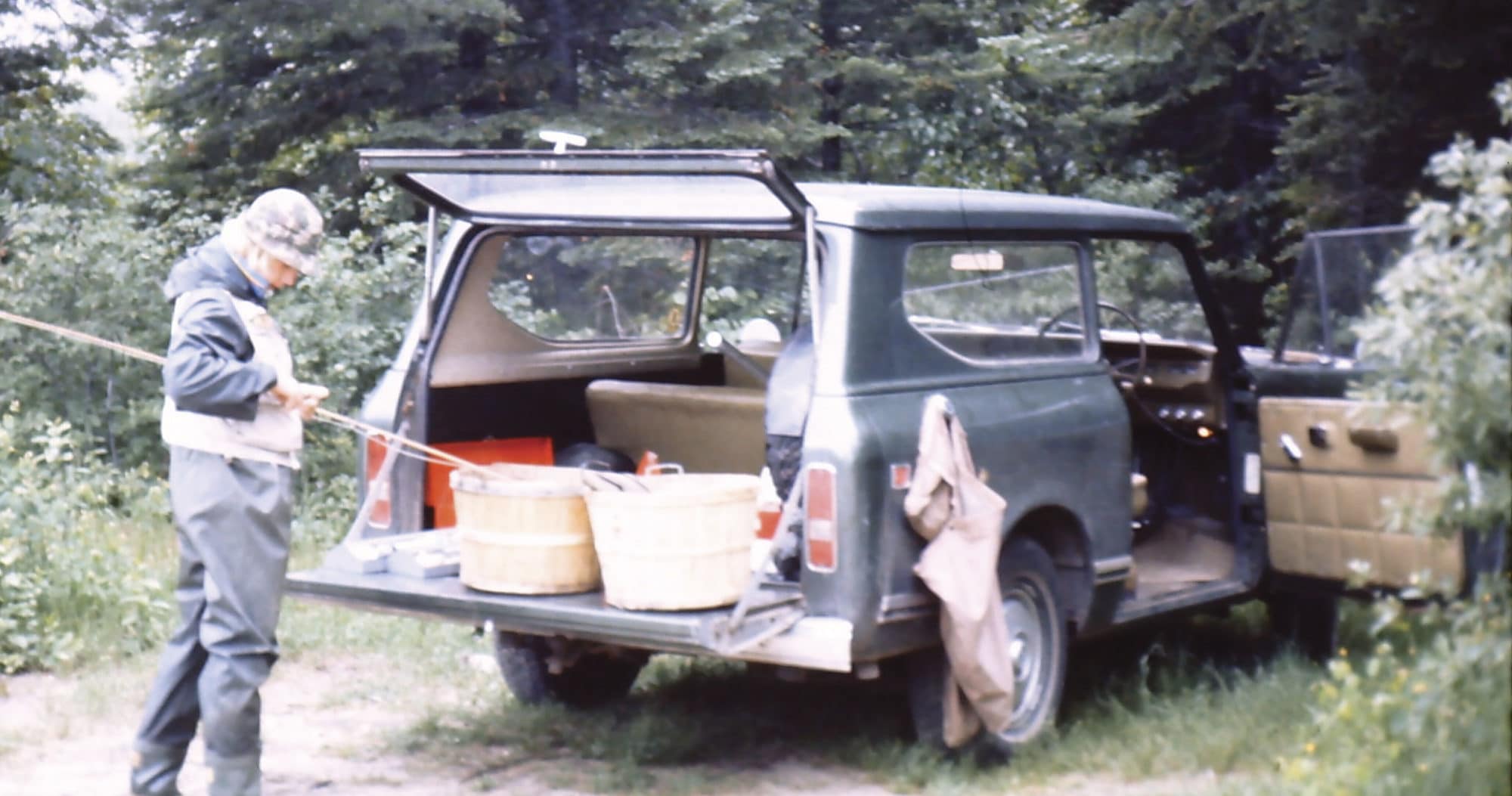 In my family, the tradition began when my father bought a forest green International Harvester Scout II, the original version, before they made them with cheaper steel. It didn’t take long for the Scout to earn its credentials. In the fall, he’d load it with dogs and shotguns, and in the summers with chains, baskets, hatchets, a machete, camping equipment, the standard waders, rods, flies and a two-day supply of dry food and drinks, just in case. Then we would take off.

It was the Scout that took us to Frenchman’s when Voelker was still alive, and in it we ambled all over the North, fishing and grouse hunting, exploring up steep embankments and down puddle-rich two-tracks in the days when we could saunter in the Pigeon River Forest or the Upper Peninsula all day without seeing a soul.

One spring, Dad and I tried to find access to an unfamiliar trout stream, hammering down a vegetation-clogged two-track until we came to a puddle about 30 feet across. We stopped, discretion being the better part of valor, until I convinced him to take a serious run at it. In those days to get a fish car into four-wheel drive you had to get out and lock the hubs, like some crude earth-bound preparation for going to light speed. “Lock the hubs, we’re going through,” we’d say.

So, I hopped out, twisted the locking mechanisms and jumped in smiling, proud of my father’s daring, and braced for what was to come. He backed up to get momentum, popped the clutch, and we raced forward, splashing and surging about halfway, then sank, spinning, soaked to the floorboards. The enormous puddle was not a puddle at all, but a swollen, sandy-bottomed stream affording zero traction. We had to hike a half-mile back to the gravel road, then north for several miles before seeing another car that took us up the road to Afton, a town composed of a bar, an old gas station and the gas station owner’s house. Dad convinced the reluctant owner to tow us out with his Scout.

The adventures continued like this, until I was 20, and borrowed Dad’s Scout for a year, so I could head back and forth to college in Ann Arbor, and so I could spend my autumn weekends grouse hunting and summers fishing. But I was an idiot who did not remember he had to change the oil at least once in a while.

When I killed the fish car, it was only 12 years old with a promising future. I was returning in the twilight from hunting north of Harbor Springs with Fat Flora, our English setter, when it threw a rod, and I ended up gut-sick on the side of Pleasant View Road, fretting over how to explain, until a state trooper came by, admired Flora and my three grouse, then drove me home. When I told my father what had happened he looked wounded. I still feel guilty and ashamed, imagining that with proper care the old Scout could still be alive today.

I now own his third fish car, anointed by my father in his final years, and entrusted to me at his passing from pancreatic cancer. It is a forest-green stick-shift Jimmy, as close in kind to the old Scout as he could find. He would have, but couldn’t buy a Scout. The International Harvester’s truck division went belly up years before.

Like the old Scout, Dad’s Jimmy has only two doors, a tape player, AM/FM radio I never turn on, and crank windows. It’s currently 13 years old. He had driven it only 13,000 miles, having weakened beyond the ability to farm, fish or hunt, and thus having nowhere to go.

Now, it smells like a blend of wet waders; wet dog; deer, duck and grouse carcasses; ice fishing minnows and mildew, with just a hint of my father’s old smoking habit. The interior roof is adorned with a hundred fishing flies of all shapes and sizes, a result of boredom one afternoon. The lever to set back the driver’s seat is missing; the right front fender is held together with zip-ties, and the back, top brake light was knocked off by me when hauling up Dad’s old army-green Sawyer canoe by myself too many times.

I dread the day I have to lay the Jimmy to rest, but rust is having its way. It’s earned its soul and remains one of only a few possessions I treasure from my father. It’s not a car, it’s a fish car, a character in my life, a conduit to the old glowing stories of father and son together, carrying all they needed with them on the way to new waters.