Overdier and Muratzki are currently raising money through an online crowdsourcing effort on IndieGoGo.com to print bulk copies of the game in Battle Creek, Michigan.  While the games could be printed for half of the fundraiser’s $30,000 goal by contracting a printer in China, the pair want to make the game a true made-in-Michigan product.

What about Mackinac Island screamed “board game?”

Muratzki: There are very few approachable ways to learn about the natural history of the island.  We spend a lot of time on the island, and we thought that a board game would be a fun way for folks to continue to learn about Mackinac Island.

Overdier: We tend to visit in the spring, which is when kids take their field trips up there—and they’re buying fudge and hats and t-shirts, but there’s not much else for them to do while they’re downtown.  And, at the same time, there are elderly people who won’t be able to explore the trails of the island.  But people of all ages can enjoy a board game, and our game is a great way to engage people already interested in Mackinac Island. 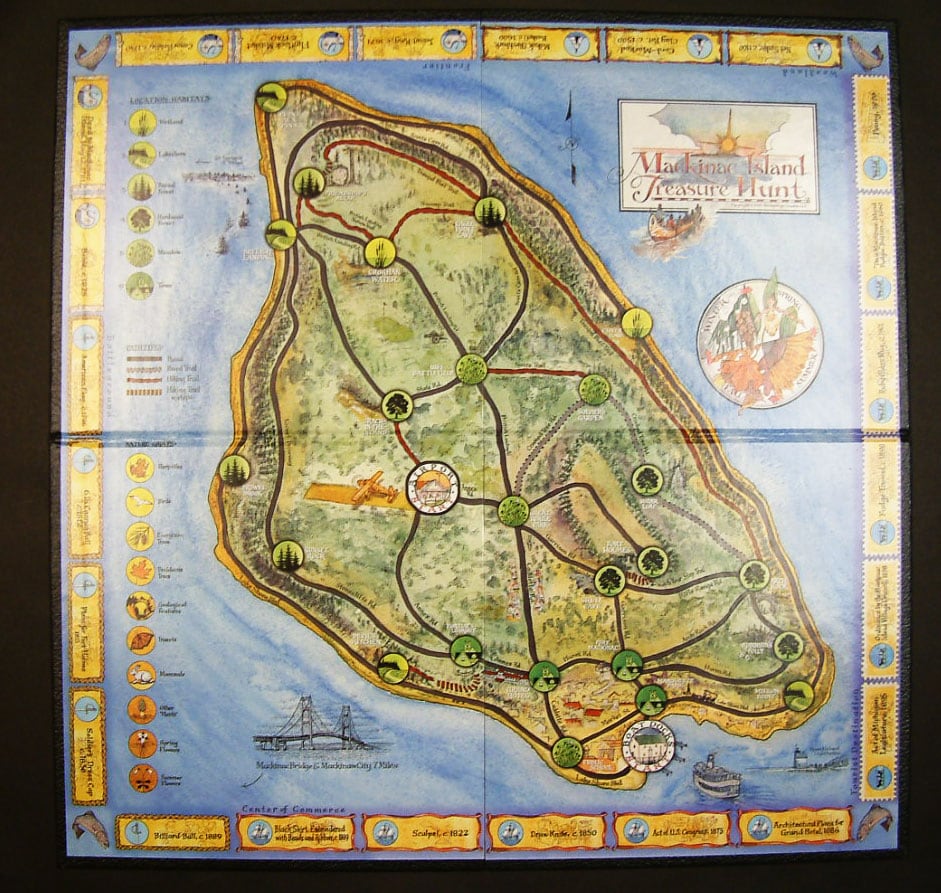 Walk me through the development of the game.

Muratzki: So it was Barb’s idea when we were out on the trails. Then we got back—and the next day was rainy—so we’re back at our condo and I started sketching out some ideas. Once we thought it was presentable, we had church groups and family members play it—

Overdier: A whole bunch of nieces and nephews.  They loved it, and they had never even been to the island when they first played it.

Muratzki: Once we thought that things were good after our families had played, we had Glenn Wolff do the artwork, and then we had prototypes printed by a print-on-demand company out of Madison, Wisconsin.

So there are actually 5 games in this box, with a card-based game being the most basic…

Overdier: We had a church group test the games, and Jim asked who was willing to try the easiest game and who would want to try the hardest game—where you really have to pay attention.  All the people that tried the easiest game first thought they would like to buy it; all the people who tried the hardest game first weren’t so enthusiastic—because it’s really challenging!  On the back of the box Glenn drew up a ‘Play-O-Meter’, which measures the degree of time and challenge for each of the five games.  So if you only have a little time to learn and play a game, you can start with the card game, Match Me if You Can!

Muratzki: Some of the games use ‘Hiding Place’ cards to make the game more challenging; the game of medium difficulty is a cooperative game where everybody’s working together to try to find a set of historical treasures around the island before winter hits. For the last two games—Treasure Hunt and Hide and Seek—we have certain ‘Event’ cards that can affect other players; some are opportunities, some are obstacles.  For instance, you can make another player slip in horse droppings.

Which is a very relevant part of the Mackinac Island experience.

‘Giving Back’ in Northern Michigan