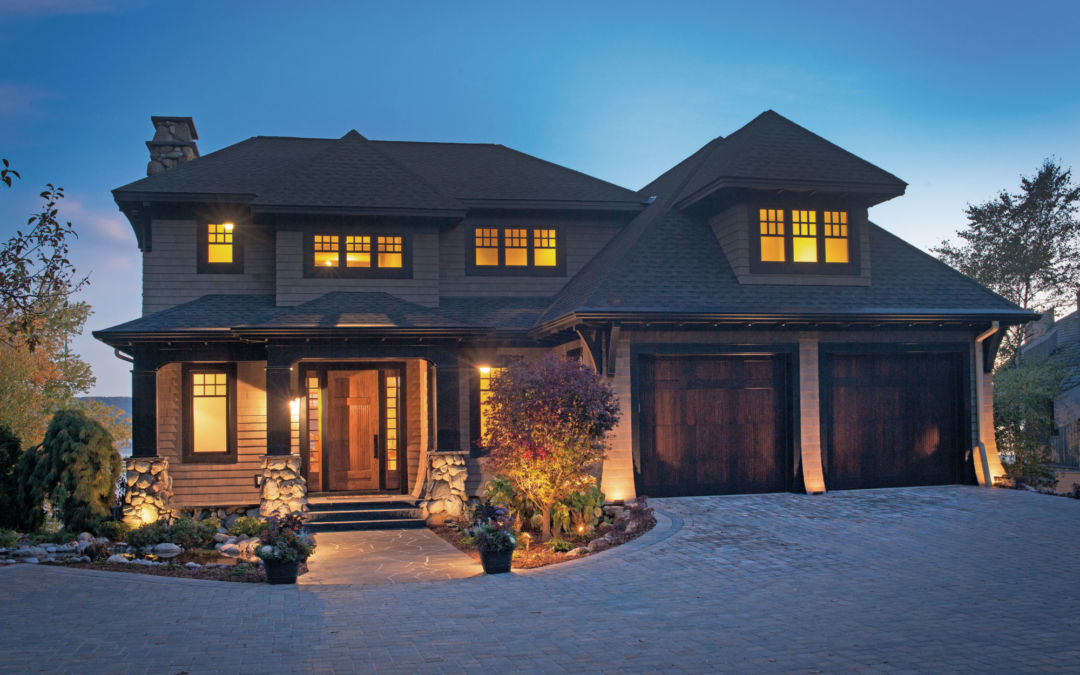 Bob Drost, Northern Michigan’s landscaping legend, teamed up with his family, his crew, and a slew of longtime colleagues, to build a Charlevoix home for the ages.

This home is featured in the April 2014 issue of Northern Home & Cottage, a bi-monthly home publication included in all subscriptions to Traverse, Northern Michigan’s Magazine. Subscribe! 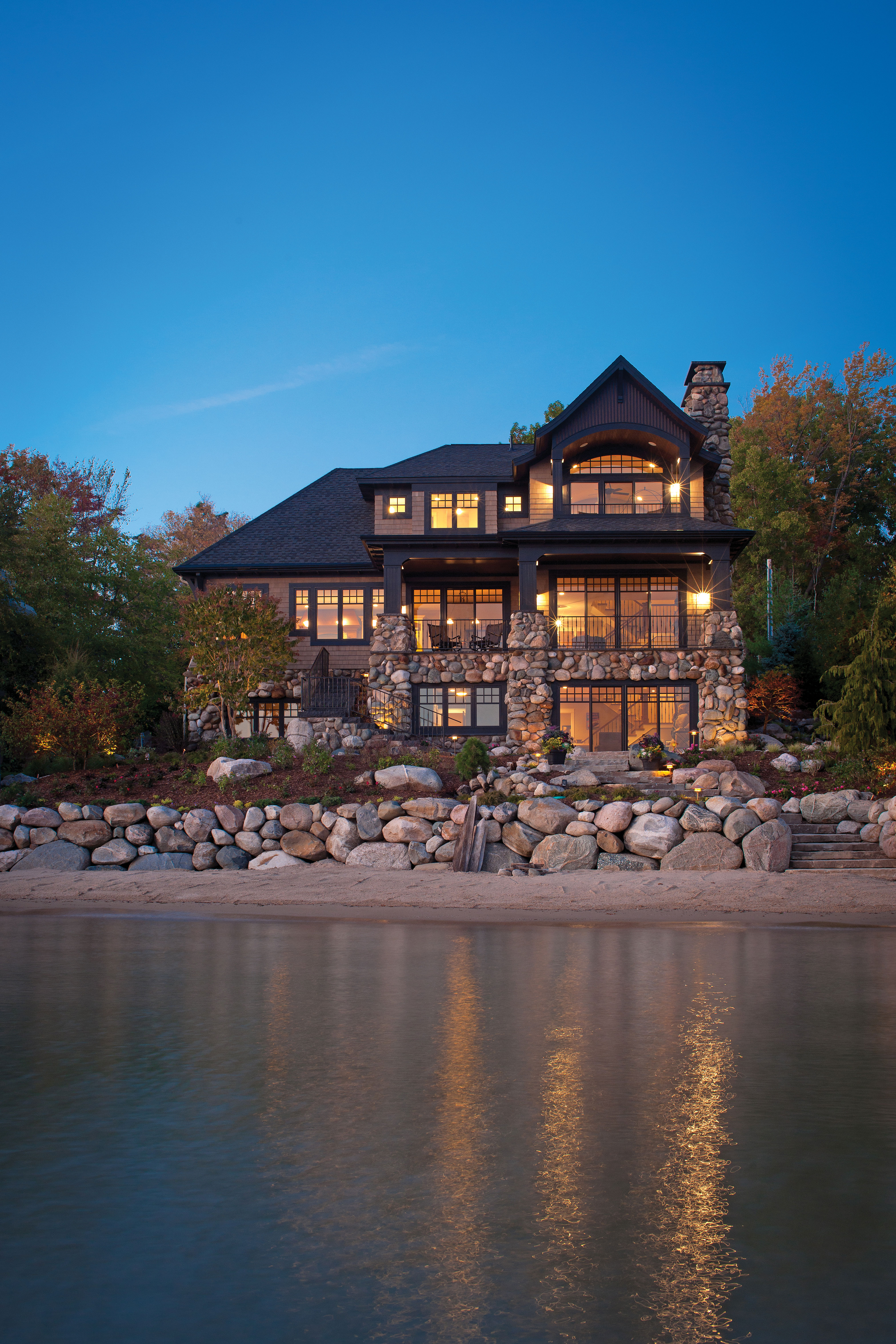 In 2014, for the sixth year in a row, Petoskey-based landscaper Bob Drost of Drost Landscape brought home a Grand Award from the Michigan Nursery and Landscape Association industry competition in January. His first-place entry, for the “design and installation over $30,000” category, was a rock vignette that encompasses a rock garden and a steamy rock pool that sits below a fireplace set into the rock wall. It all blends into the landscape naturally; as if a glacier melted and left it behind.

This emphasis on rock in landscape design is Bob’s signature style. He’s been enamored with rocks as long as he remembers—an innate fascination fostered by his childhood in Charlevoix, a town famous for its mid-1900s whimsical stone homes designed by architect Earl Young. The first time, years ago, that someone told Bob one of his stone designs was reminiscent of Young’s style, Bob recalls nearly busting a button. Since then, Bob has gone on to hone his own style manifest in man-made streams, gardens, outdoor fireplaces and elaborate outdoor living areas—all set into some of the finest properties in Northern Michigan. 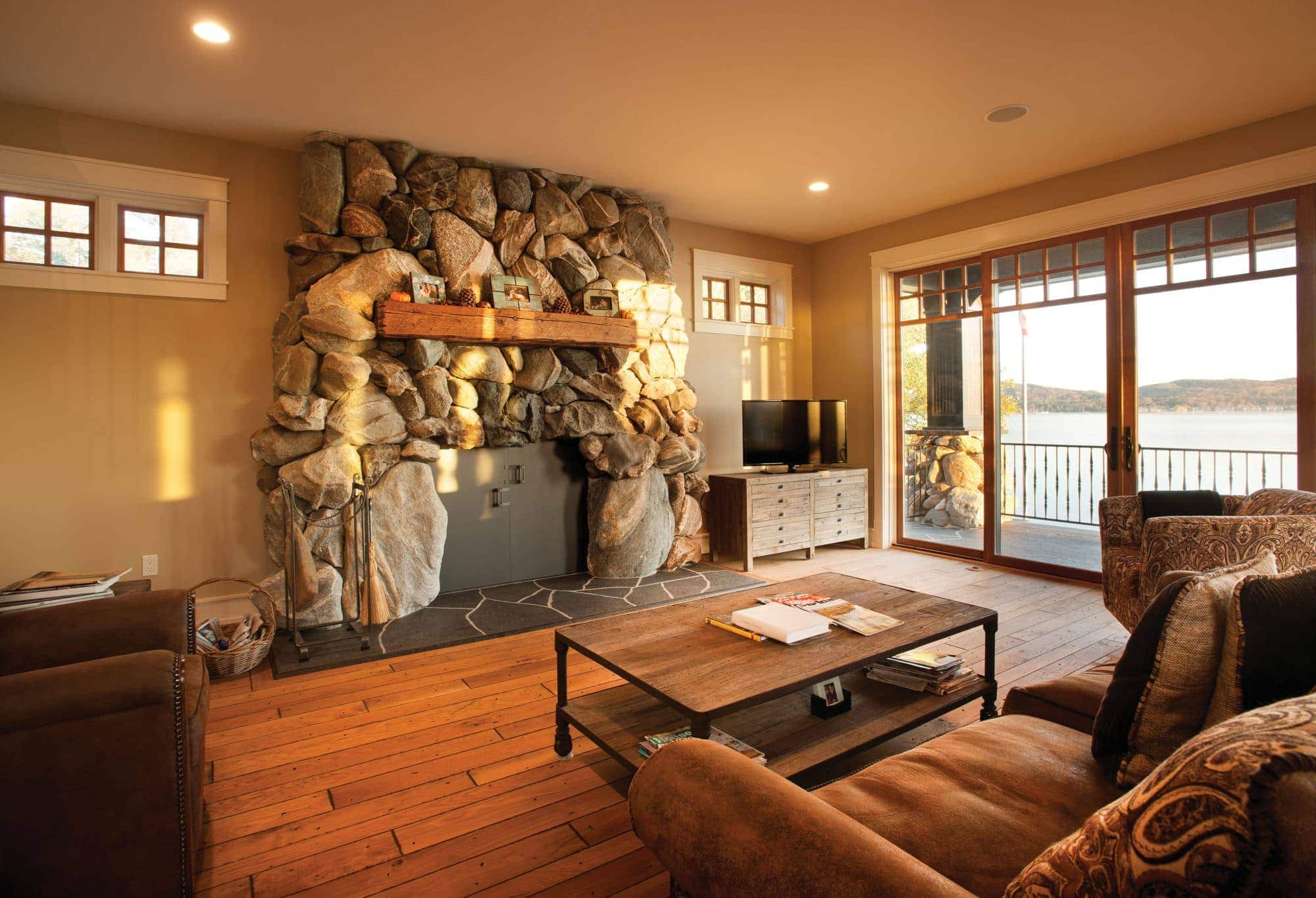 Not surprisingly, the handsome home Bob and his wife, Diane, built for themselves on Lake Charlevoix has an emphasis on stone—300 tons of it. “That’s 30 truckloads,” Drost says. From two fireplaces crafted from massive Lake Huron boulders and built by the Drosts’ son Dustin, to the foundation, to the rock slabs that lead to the breakwall, rock stars in the Drost home.

While Drost acted as his own contractor, he and Diane hired Mapleridge Construction to do the framing, siding, and trim. The couple turned to Jill Rowley of Glennwood Custom Builders and Interiors to design the home. Since Bob and Jill have worked together on a number of projects, the Drosts knew she could help them capture the feel they wanted of a venerable, early 1900s cottage. The finished product is a tan-trimmed-in-black shingle-style home with Craftsman accents. In keeping with the lot size, the home is not massive—though anchored in stone and rising three levels, it feels very substantial. 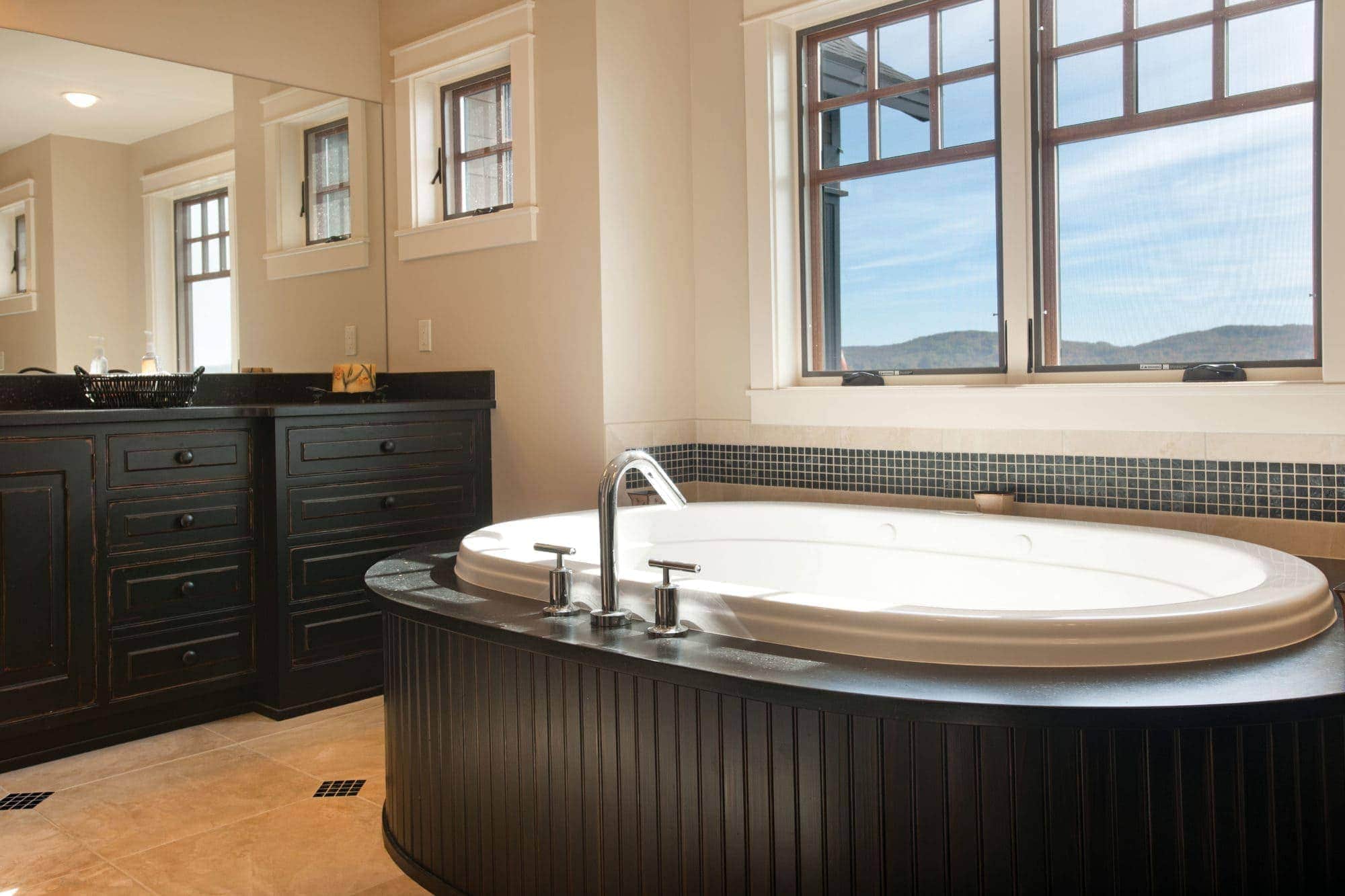 On the interior, elements like carefully crafted woodwork, oiled white oak floors with a French bleed accent, and formal cabinetry combine to parlay the feeling of a fine cottage with Victorian and Craftsmen influences. The home exudes careful detail, right down to old-fashioned cast iron pipes the Drosts opted for because of the way they block the sound of water rushing through them.

One of the most enjoyable parts of the construction process was the way Bob’s longtime friends in the Northern Michigan construction business took a personal interest in the home. Builder and woodworker Andre Poineau made it a point to drop by from time to time to check on the process, following up with suggestions for Bob. Jeff Collins of Glennwood Builders provided guidance and painting. The couple found a deal on the stunning cabinetry thanks to a tip. “It was exactly what I’d wanted,” says Diane. 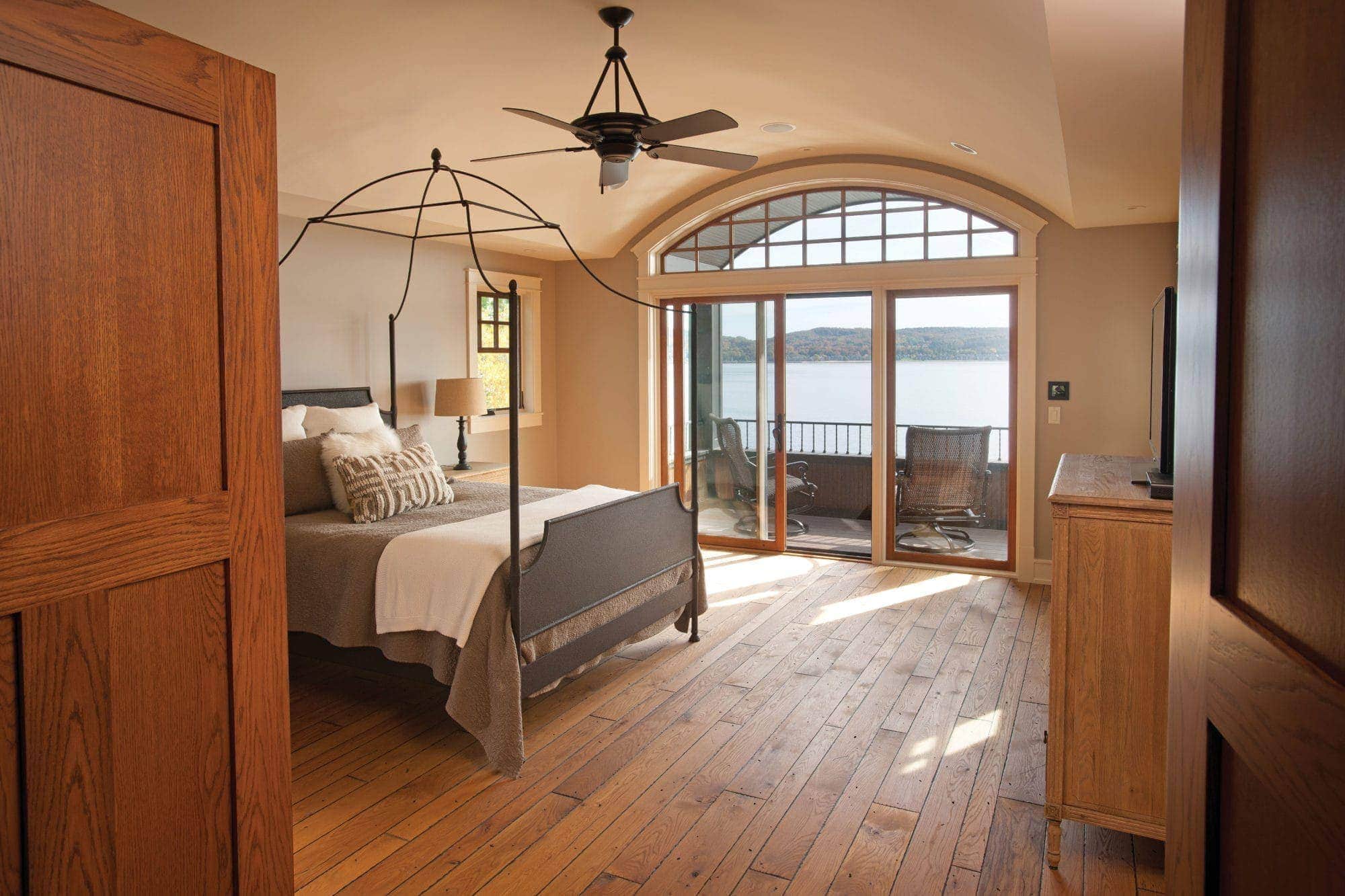 The rest of this home’s story is about how Bob’s talented landscaping crew (that includes his son Dustin) did a large part of the actual home building. Bob still marvels at the way his crew managed complicated tasks like installing the 100 galvanized pilings that the home sits on and fashioning a barrel vault in the ceiling of the master bedroom to mimic the shape of a window that arches over a picture-perfect view of Lake Charlevoix.

It’s probably no surprise that a home created by a cast of people who have mostly spent their entire lives around Lake Charlevoix embraces its setting in such a comfortable, classic way. This home built on rock, lives very well indeed. 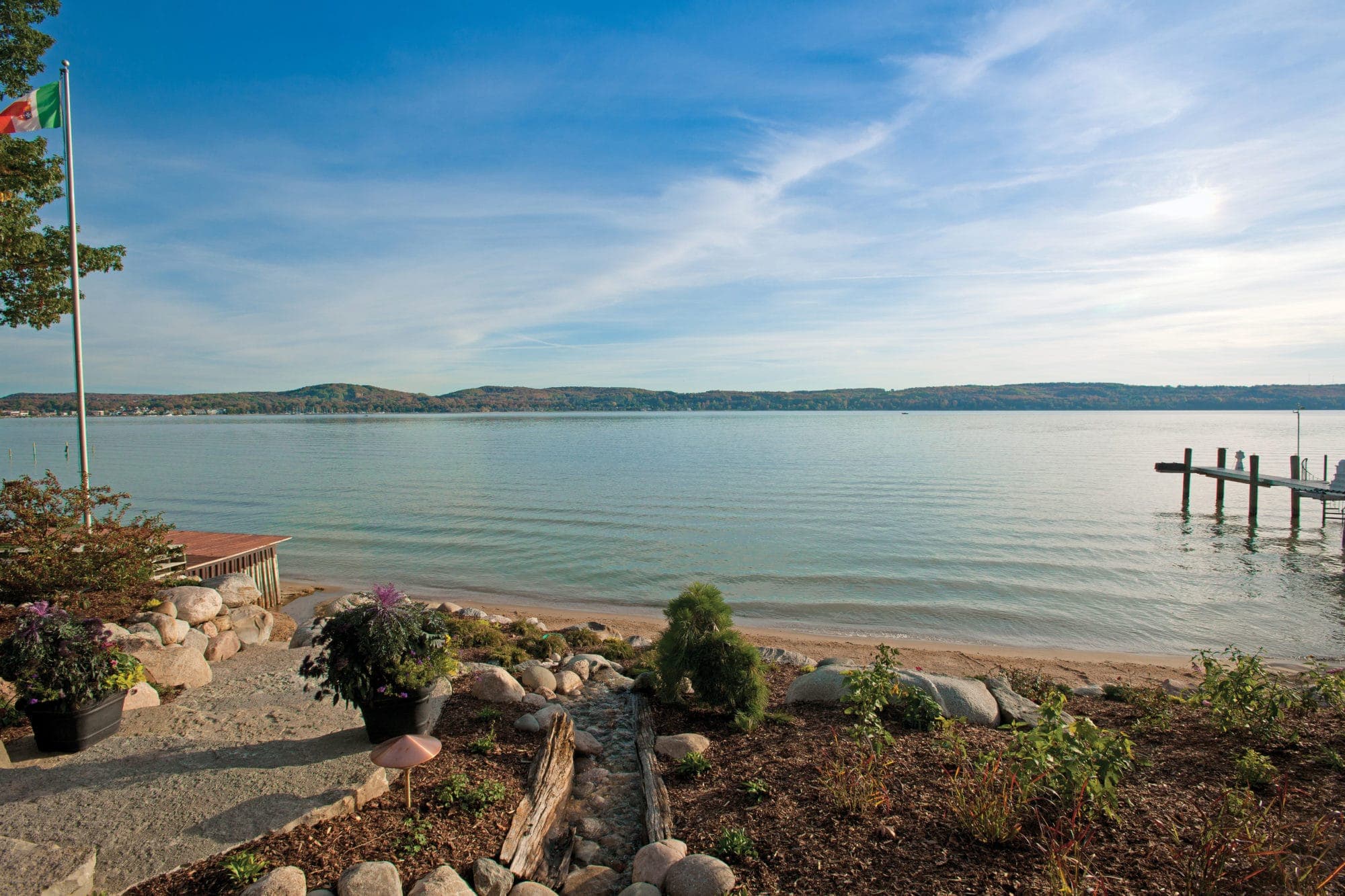 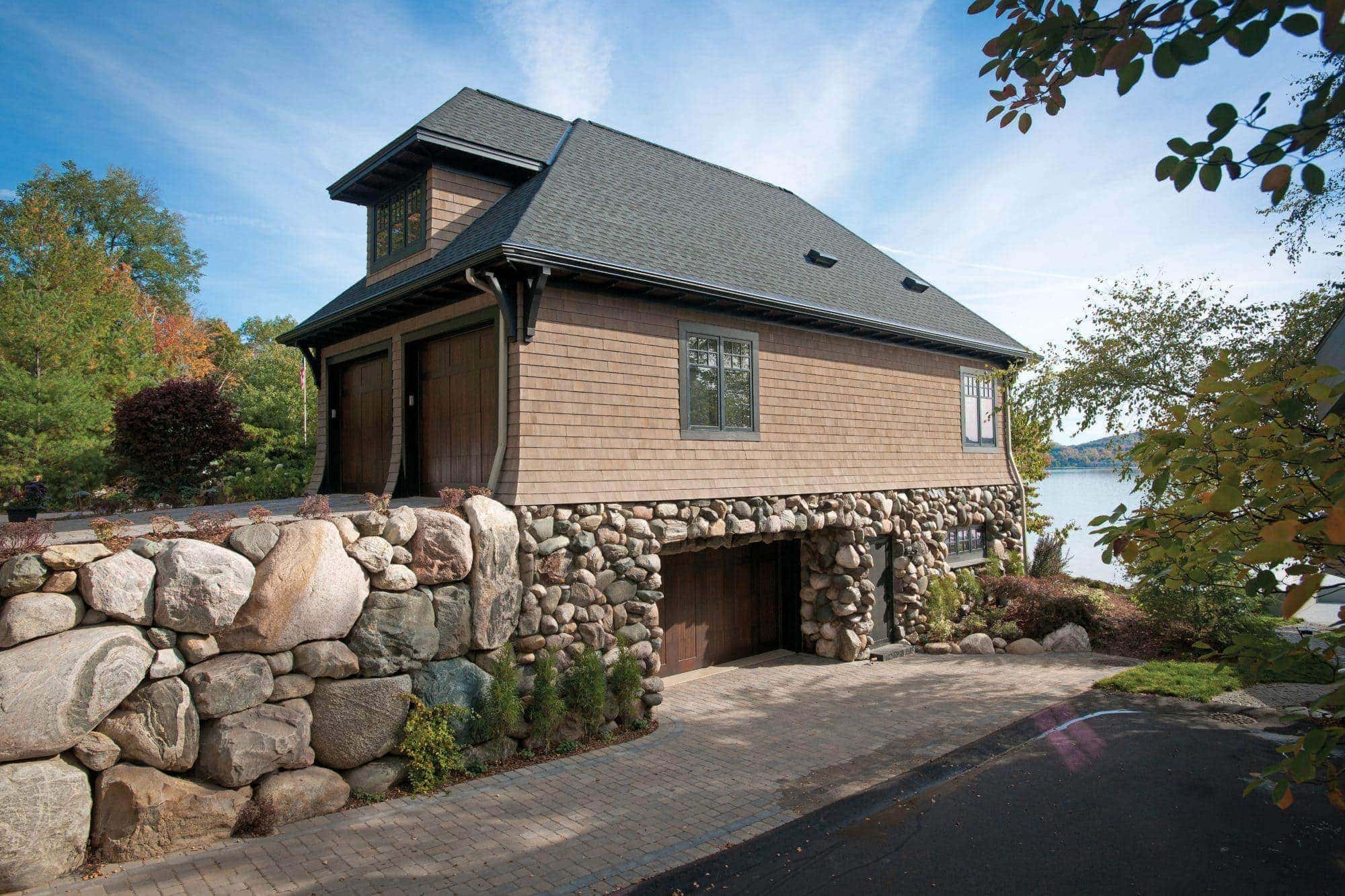 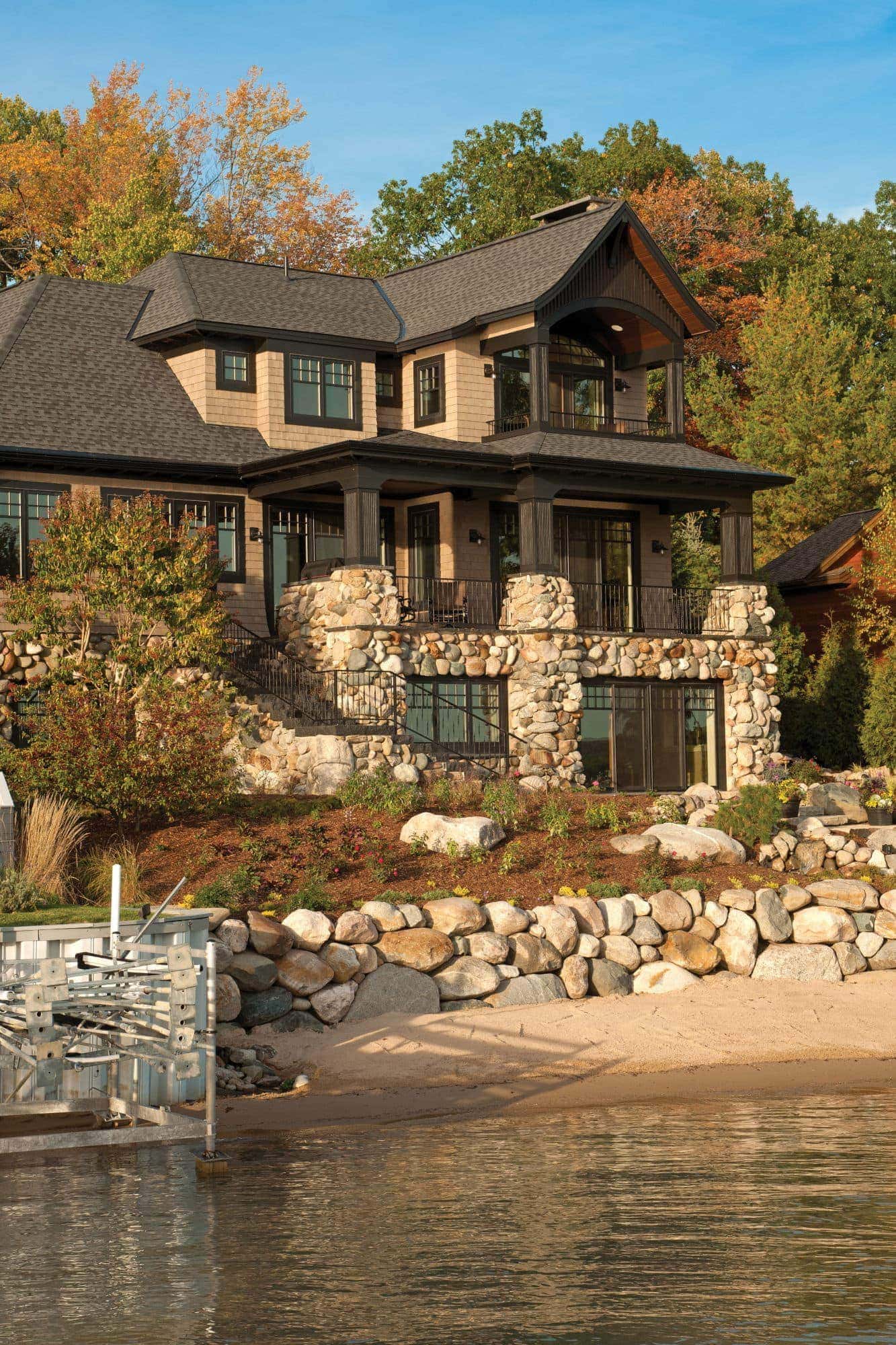 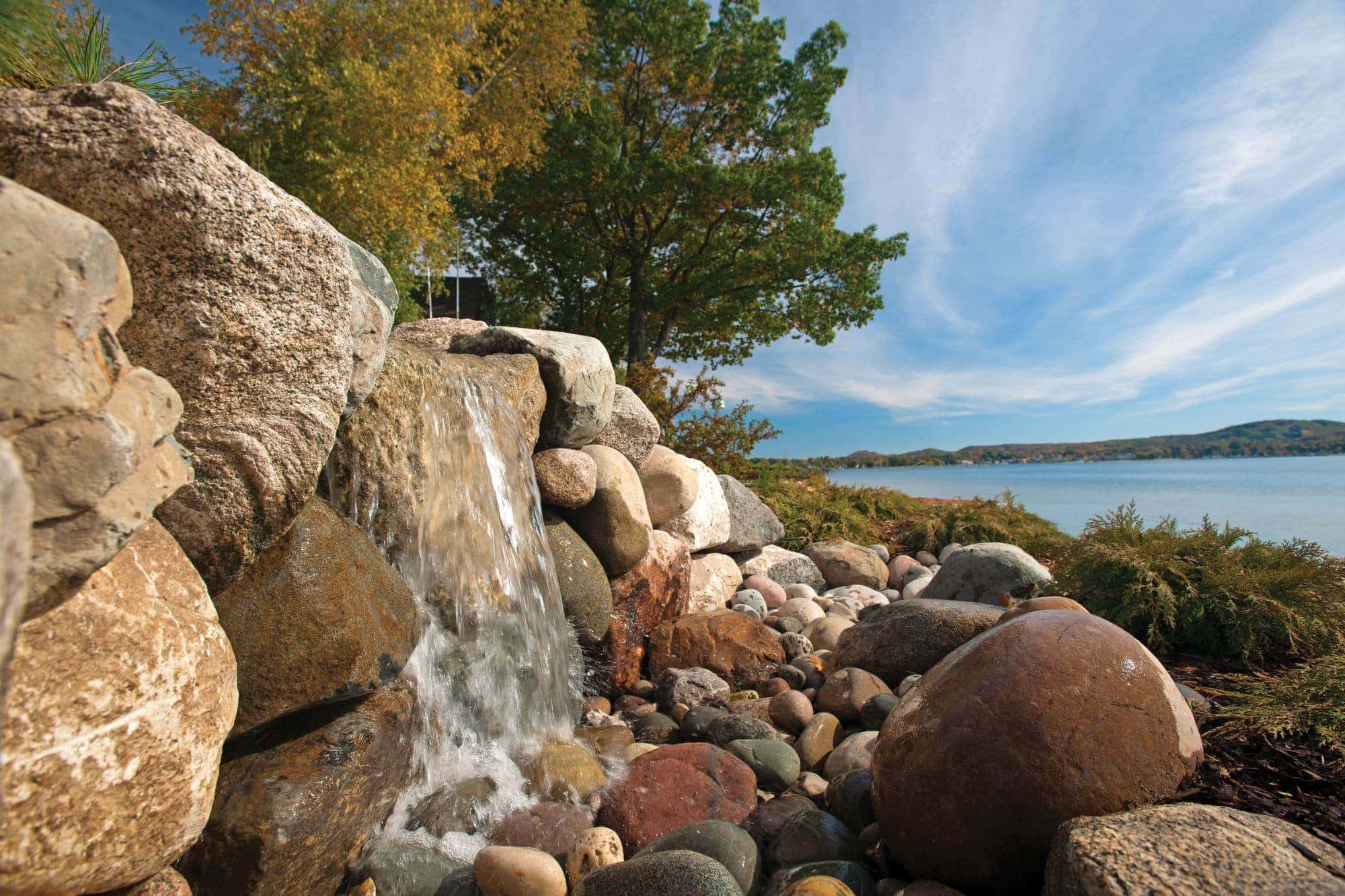 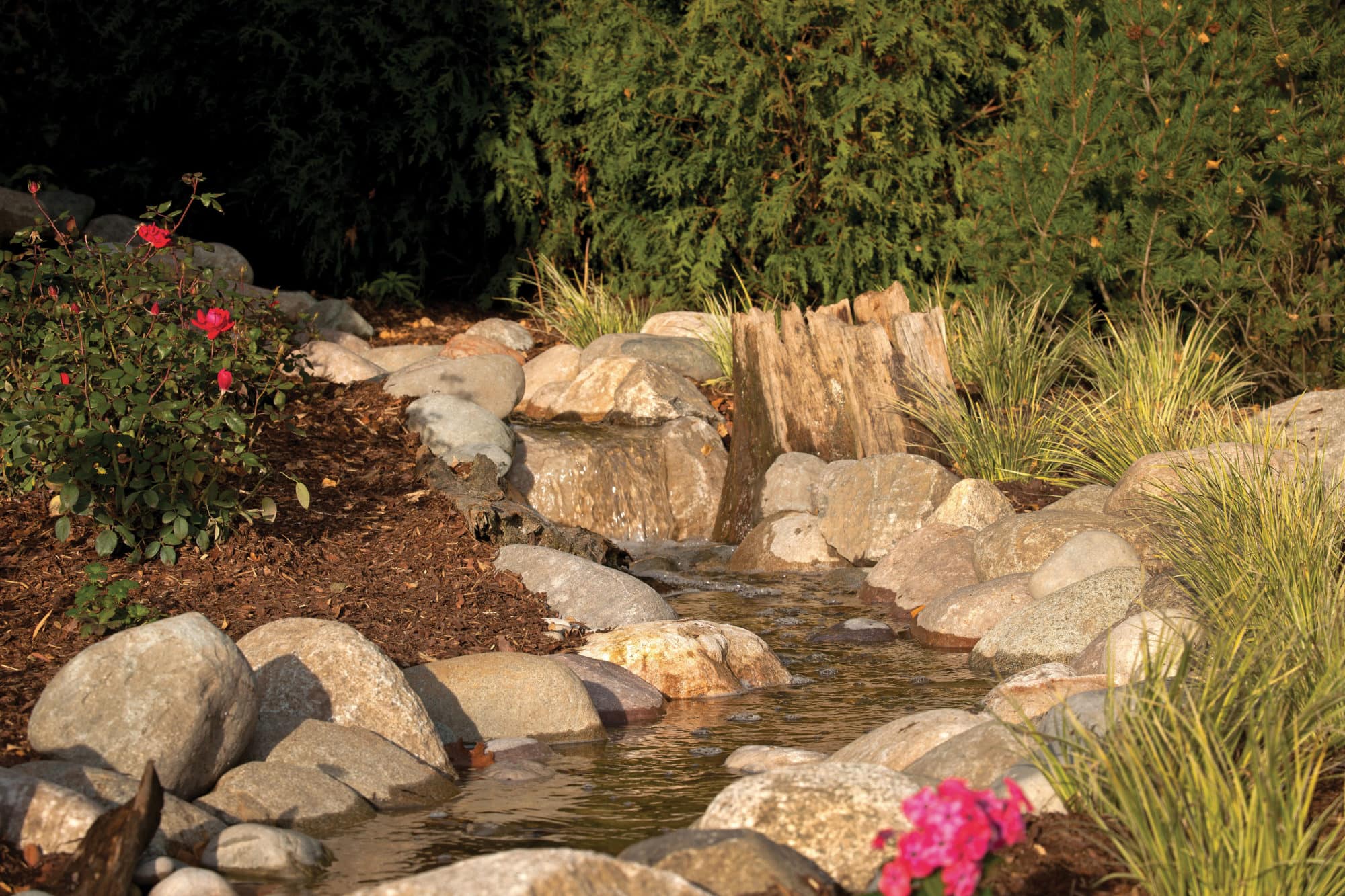 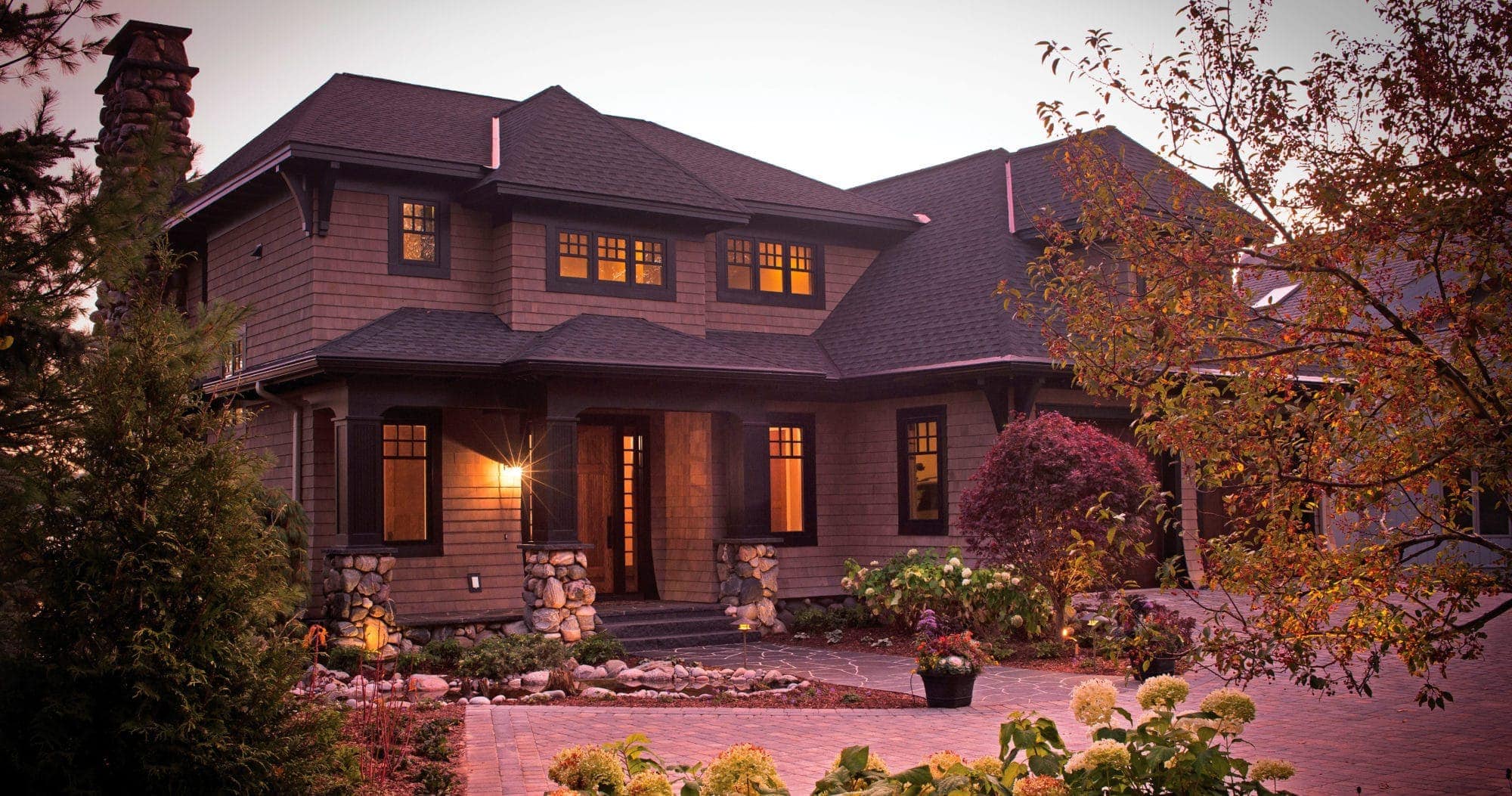