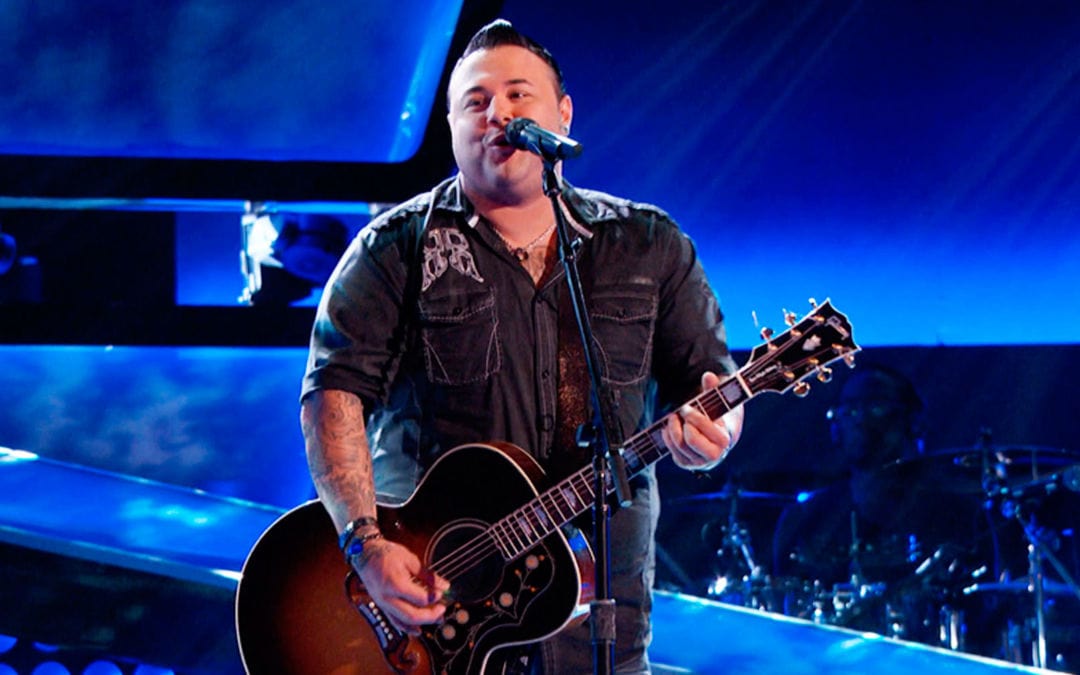 Traverse City’s favorite singing son, Ryan Whyte Maloney, will perform at two events in Northern Michigan following his remarkable run on NBC’s singing competition, The Voice.  After a chair-swiveling blind audition and two intense sing-off style battle rounds, Maloney was eliminated from the show when his celebrity mentor, country singer Blake Shelton, had to whittle his team from five members to three.  Despite not winning the competition, Maloney has no regrets, and the Las Vegas-based musician will return home to play Northern Michigan concert events in Manistee and at Traverse City’s Cherry Festival.

The Manistee concert, held at Seng’s Marina, will raise funds for the non-profit Stomp Out Cancer Fund, which helps cancer patients in Mason and Manistee counties offset treatment expenses; the performance will occur on Sunday, May 11th at 4 pm.  Click here to purchase tickets at Stomp Out Cancer’s website. He’ll open for country singer, Justin Moore, on July 11th at the Cherry Festival.

MyNorth’s Evan Perry corresponded with Maloney via e-mail (he’s got a busy schedule, you know) to learn about Maloney’s post-Voice exploits.

Opening for Justin Moore at the Cherry Festival seems like quite the homecoming. How excited are you to play in front of your hometown friends and family? Also, when was your last gig in TC—and could you describe your haircut at that time?

I’m excited to play in my home town, and to show people if you put your heart into a passion wholeheartedly, you can make the impossible a possibility that’s a touchable, breathable dream.

Well, let’s see…the last time I played Traverse City was opening for Jimmy Wayne at Ground Zero on August 19th, 2010. My hair was the same, and I looked almost exactly like I do at the moment!

Aside from the shows in Traverse City and Manistee, you’ll also be playing a benefit concert in Royal Oak.  Tell me about that.

The benefit concert is built on saving and preserving Camp Cedar Ridge in Detroit for gifted and financially-challenged kids. I had humble means growing up, and never had a music lesson, so as a father and adult looking back I believe it’s quite important to show the passion of a musical upbringing to the future generations. These kids today live in such a digital world with no soul, and having an outlet aside from digital escapism is a fresh approach to hands-on and heart-inclined love for the arts.

Briefly describe your sound for those who haven’t seen The Voice—influences, instruments, inspirations…

I have written music ranging from acoustical to alternative-infused swampy-country with undertones of rock that can acclimate its way into both rock and country; I write music that makes rock and country face each other and respect their differences. My goal is to be the best of both worlds, and make each listener feel compelled to think and paint his or her mental canvas with life experiences. As a teen, I listened to Smashing Pumkins, Jimmy Eat World, The Cure, Ours, Silverchair—music that painted ideas and imagery and landscapes that had no boundaries of time and space. Later in my years I grew to love Rascal Flatts, Allison Krauss & Union Station, Nickel Creek, Brantley Gilbert, Brad Paisley, Kenny Chesney, Tim McGraw, Dierks Bentley and Johnny Cash. I pretty much listen to country music ninety-percent of the time.

All in all, my influences blend in and out to cultivate a union of beauty and well thought-out musical imagery with honest lyrics—with life pouring through the speakers to swoon and pull the inner heart strings.

How has The Voice altered your career? You didn’t win the competition, but it seems like you still came out a winner.

I think all the above are positives.

Who are you pulling for as the competition proceeds, and why?

I am rooting for Jake D. Worthington; he is the funny hillbilly from Texas, and it’s obvious America and the network loved him from his appearance from the season-5 blind auditions. I had the privilege of staying at the completion and getting to know his family—and mine met his, too. He was my little brother, and I spent days playing guitar—showing him some country licks—and he even showed me some cool Texas underground country. I personally know and respect him as a young voice and as an artist. I believe in who he wants to be and I think he will be huge!