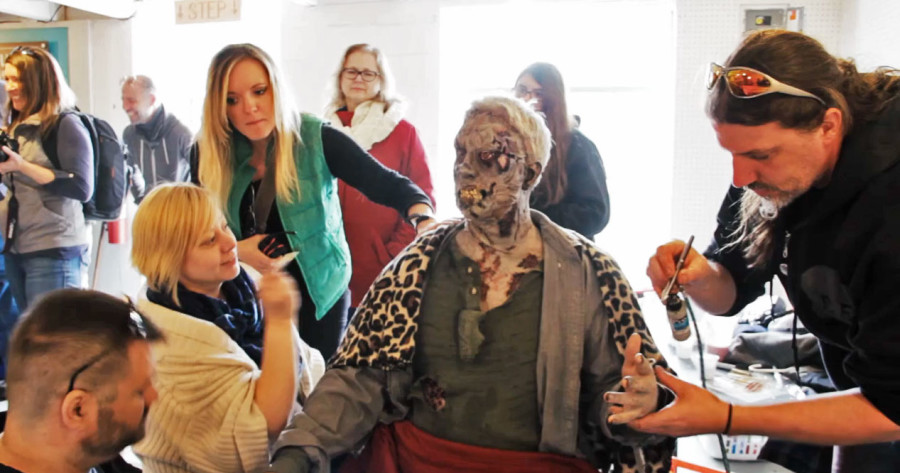 Thaw of the Dead is a short Northern Michigan-made film about a group of humans holed up in an abandoned dam, struggling to survive in a post-apocalyptic, zombie-infested Northern Michigan, and one man’s quest down the dammed river in hopes of saving the humanity of the survivors.

The week after filming wrapped, MyNorth contributor Aaron Brooks visited the Traverse City studio of Treefort Collective—the multi-media cooperative that produced the film—and sat down with director David Marek, producer Cat Muncey, and director of photography Matthew von Dayton for a conversation about the project. Look for the film’s release this fall.

The plotline of Thaw of the Dead is pretty fascinating. How did you guys come up with it?

David Marek: Matt and I, when we first started talking, we knew we wanted to do it, obviously local. I think we’re both big proponents of shooting on location, and there are such amazing landscapes and locations locally that we were excited about that possibility. I can’t remember how we came up with the river. I think it was the river first—we were thinking, well, that would be the safest way to travel, would be via river.

Matt von Dayton: I think we started on the coast, and then went inland.

Marek: Yeah, and that was Matt’s idea—he had an interesting take that spawned a lot of the interpersonal struggles. I mean, that’s the main motivator of the film.

von Dayton: For the zombies and the people, which just harkens back to survival.

What do you mean “for the zombies”—they eat other zombies, or they eat people?

von Dayton: Well they . . . So a zombie is a—you know, however you define it—an undead creature. But it cannibalizes—right?—as survival. But it’s animalistic, and just instinctual, so it’s uncontrolled. Whereas, for humans, that’s an intentional choice. It’s still a survival choice, but it’s one of the hardest choices to make probably—eating another human. So it was a great juxtaposition to have this undead, animal creature that’s just doing that because that’s what it does, and then a human, humane creature that has to choose to do it. So it’s just a great juxtaposition. These people, the humans, are trying to survive against this creature, which is a cannibal, but in order to do that they have to become cannibals themselves.

Watch A Behind The Scenes Video Of The Making Of ‘Thaw of the Dead’:

Benjamin Busch, who plays your protagonist, is a fairly well-known actor. How did you manage to get him involved? Did you already know him?

von Dayton: I worked with him on a small thing last August. We were making this short trailer for a buddy of his that’s got a book coming out. So I just shot with him for a handful of days and, he’s a super awesome dude, and it was fortunate that he also fit the part. So we just sent him an e-mail and he’s like “Yeah, sounds good. Just make sure the script doesn’t suck.” We sent him the script and chatted with him on the phone a week or so later, and he was totally game, totally into it. I e-mailed him after the shoot a couple days ago, and he responded that it’s not often that he gets to play a guy that’s right on the edge, and . . . going over it. So I think he was totally down with the story and the script.

Meaning the edge of sanity?

von Dayton: . . . and with the story. And he was the perfect guy, ’cause, you know, any kinda hoity-toity, A-list Hollywood person is not even gonna put their foot in the water, and he’s fully submerged, totally choking on smoke, running through the woods . . . He’s like, “oh, I’m gonna fall in this river, make sure you get the shot,”—something that he just wanted to do.

Marek: Yeah, the film wouldn’t have been possible without him, just on a performative level, you know. ‘Cause he did, I mean it was in the 30’s and he threw himself into Sabin Pond and then ran for about a quarter mile with 70 pounds of wet clothing on. You definitely don’t get that from everybody.

What was it like directing a guy who’s kind of a star—or, I don’t know if you’d call him a star, but, a guy who was in The Wire, and who’s a pretty accomplished actor?

Marek: Ben is a real professional—he takes his craft very seriously—and so he’s really looking for direction, which is fantastic. He anticipates really well, I mean his instincts were fantastic, and he took direction amazingly well. I mean you, you give him a small note and he was able . . . he’d be like, “Oh, yeah yeah,” and he would get it, and he would go in that direction, and I was pleased nine times out of ten. It was inspiring, and a little intimidating. I mean, I’ve worked with some really excellent people, but none spent as much . . . he was sort of within his character a lot, which was very to the point, on edge, and so he kinda communicated that way on set.

That almost sounds a little scary . . .

Marek: Yeah, he was intense, he was playing a very intense character, and he was in that, you know, and so he would just shoot you these dead stares, and be like, “You want something different?” and I’d be like, well, you know, let’s try it a little bit this way, or a little bit that way . . . But he was really, like I said, an absolute pro, and very intuitive.

Matt, as the director of photography, how did you go about creating the visual characteristics of the film?

von Dayton: Well, it was a collaboration with David. We knew early on—with respect to this being a film that’s just coming out of the winter, and it having a tone that’s kinda dark—that we wanted a cold, desolate type of feeling. I mean, it’s an apocalyptic world. We were also inspired by the landscape, so we shot some wide landscape stuff, because it’s a story that’s . . . it’s about zombies and apocalypse and stuff, but it’s also specific to our region, which hopefully makes it unique. All of our locations are local, so part of the feel of the film is just capturing the natural environment here.

Did you get some good overcast days to help you establish the post-apocalyptic atmosphere?

von Dayton: That’s one of those things you can’t control. We knew that going in, and the few weeks beforehand we’re like, oh, it’s been overcast so far, we might hit it right. It was kind of funny—it was officially a five-day shoot, and the first two days were interiors at the dam, and it was nice and overcast. It would’ve been perfect. The two days we were outside after that, full-on sun all day, super-high-contrast . . . Like, the night we dumped Ben in the water, we were behind, so we didn’t get that until around sunset, and so it’s this awesome golden-hour light, as he’s splashing the water and there’s cool, silhouette-y lens-flare stuff as he’s heading out of the water . . .

von Dayton: Well, that’s . . . It is. And that’s in the script, and that’s in David, and that’s in me a bit. It’s not going to be, like, lowbrow, just guts and gore. There are some scenes that are going to be unique for a zombie film. And so it’s very . . . If you’ve seen Somewhere West, David’s film, obviously Malick is a huge influence. And so there definitely are moments, especially with the landscape, and just little details of life, that somebody like David would pick up on. So there’s stuff like that in the film.

The Indiegogo campaign for this movie was very impressive, and Cat, I know you had a lot to do with it. Did you come up with the whole thing on your own, or was it another collaborative effort?

Cat Muncey: It was definitely collaborative. I mean, I came up with the marketing plan, and basically it was like, we’ve got to do all of these things to make the money, and we had to stay on a certain trajectory, and I had analytics that we had to follow. I had done it before, a couple months earlier, for twice as much money, but I had had a whole month of planning for that before I launched it, and this was, like, you guys wanted to go fast . . .

Muncey: I guess the big thing was, we knew we wanted to make Thaw of the Dead a community experience. It was a micro budget, and we wanted to pull off . . . it’s an ambitious film . . . we wanted to pull of some pretty amazing special effects and a really captivating story with very limited resources, so we started coming up with—what are our rewards, what are our prizes, how do we get people involved, through Indiegogo. So it’s not just, you know, just trying to make money to do a thing that we want to do independently, but rather, use it as a tool to engage the community. I mean, the Indiegogo campaign ended up being one of our best marketing plays, just to get in front of people that might be interested in helping with the project, whether it’s financially or not.

And some people paid to be zombies in the movie, right?

Marek: Yeah, that worked out really well in a lot of ways when we decided to incentivize the zombie roles. So you could pay to be either a background zombie, or pay more to be a featured zombie—the featured zombies getting more special effects and more screen time. That was really smart, because there were a lot of folks that were really interested and we ended up selling out of both brackets. So it raised a lot of money, but what was kinda cool . . . I mean, we hadn’t expressly thought about this beforehand, but all those people were rabid fans. Normally, you would do a casting call, and you would probably get some people that were interested in being a zombie, and that sounds like fun, but this sort of . . . we only took from the cream of the crop, as far as enthusiasm for the project. These people were willing to pay to be in the film! And so they were willing to spend a twelve hour day in makeup, sitting around waiting to do their couple minutes of stuff, so that was kind of a windfall. And like Cat’s saying, now we have a large community and family that’s worked together and that will support this project, and so there’s a groundswell of excitement around the piece, even though it’s just a short film.

That’s so cool! So what are your hopes and dreams for Thaw of the Dead? Any chance that it might give rise to a feature-length film?

Marek: That’s something we’ve been talking about. I mean, it’s such a loved genre—and there are a lot of folks in the area that love the genre—that there’s been a lot of encouragement, a lot of support. And so we . . . Yeah, I think we would love to see it turn into a feature.

Interviewer Aaron Brooks is a freelance editor and writer living in Traverse City. He can be contacted at [email protected]