Morels: Why You May Never Be A Certified Wild Mushroom Provider 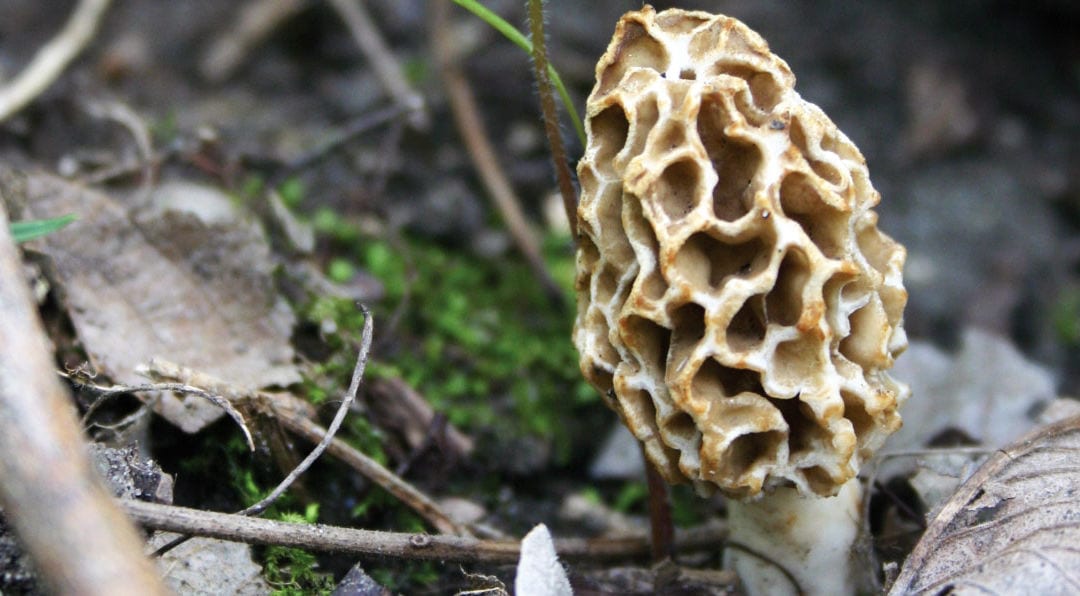 The State of Michigan provides little guidance on what it takes to be a certified mushroom provider.  How will increased attention from regional health departments affect the cottage industry of wild mushroom gathering?

That’s the likelihood of plucking a potentially deadly mushroom in Northern Michigan if you were to randomly pick one off the ground.  Bump that number up to 3 out of 10 to include mushrooms the ingestion of which can turn you inside-out with a seemingly life-sucking sickness.

Yet it would take a dewy-eyed character from a bad fairy tale to naively traipse around the woods snacking on mystery mushrooms. Restaurants and foragers involved with the purveying and consumption of wild-harvested mushrooms—especially morels—are obliged to have a working knowledge of the mushrooms they distribute, if only for the sake of legal liability. That widespread practical knowledge of mushrooms, while perhaps unsophisticated from the perspective of a professional biologist, has been the foundation for Northern Michigan’s edible mushroom economy for decades. Morels are, after all, notoriously easy to identify, and the absence of any reported illnesses related to mushroom consumption at a Northern Michigan restaurant has allowed the relatively self-regulated industry to thrive near the back doors of kitchens in the area. And the increased interest in locally-sourced foods over the last few years has meant that even more restaurants are serving Northern Michigan-harvested mushrooms than in years past.

On March 17th, The Health Department of Northern Michigan—which oversees inspection of Northern Michigan food establishments in Antrim, Otsego, Emmet and Charlevoix—dispatched a letter to 700 restaurants and food vendors reiterating regulations pertaining to wild harvested foods.  The rules limit exchanges at both ends of the transaction to licensed handlers. For sellers: “All wild harvested foods of any kind must be obtained from approved or certified persons.” And for buyers: “No establishment is allowed to self sort any wild foods without current specific approval.”

The Health Department’s motivation for reminding restaurants of the existing wild food regulations is a matter of ensuring public safety: it’s best to err on the side of caution, especially when a misidentified mushroom could be deadly. These practices, as noted by the Health Department’s Dan Reynolds, are nothing new. Says Reynold’s: “For anything that’s sold in an establishment that might be consumed, we need to be able to give them reasonable assurance that it’s safe.” The rules also ensure that restaurants—and ultimately consumers—receive a consistent stream of quality mushrooms, as less discerning eyes are more apt to confuse inferior, still-safe-to-eat lookalikes, such as false morels, for their tastier cousins.

While seemingly straightforward, the Health Department’s restatement comes with a few wrinkles. Firstly, the State of Michigan gives little guidance on what it means to be a certified distributor or sorter, meaning that the Health Department of Northern Michigan has been left to improvise a solution to a policy problem better suited for a statewide organization, like the Michigan Department of Agriculture and Rural Development. Secondly, there are only a handful of currently certified mushroom distributors statewide, two of whom are residents of Northern Michigan: Ken Harris, who is the proprietor of the Michigan Mushroom Market, and Justin Rashid, who owns American Spoon Foods.

For the seasonal forager used to selling his or her day’s bounty at the back door of a restaurant, the time and intellectual investment needed to become certified may outweigh the utility of being a vendor. Complicating the situation is the fact that there’s no telling how much training the state would require of a potential mushroom expert. Says Rashid: “Unless you make a study of it, there are often gaps in people’s knowledge. How risky those gaps are depend on what kinds of species are being identified.”

For present purposes, the Health Department of Northern Michigan has enlisted Rashid to instruct interested restauranteurs in proper identification methods—although only for morel mushrooms—while Harris has been instrumental in assisting Health Department officials in mushroom identification matters. In the meantime, it looks like it’s in the hands of the state to write the rules for commercial mushrooming in Michigan.