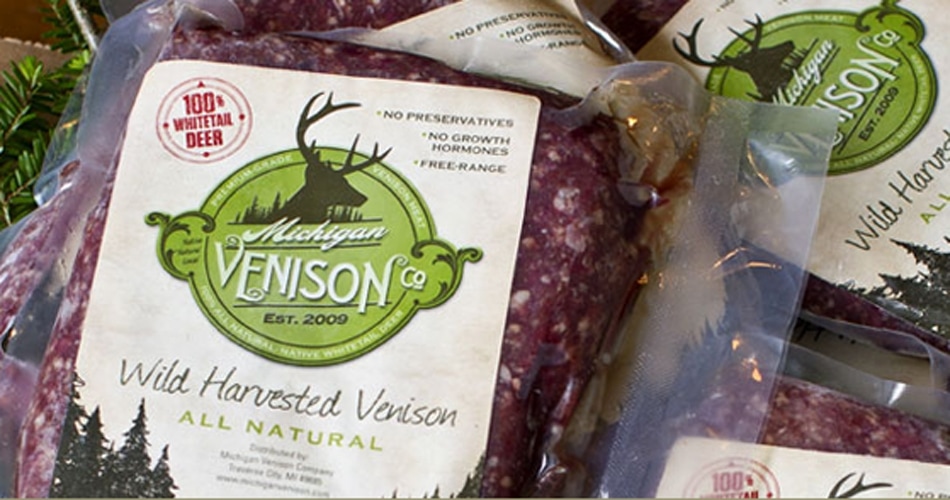 Looking for an alternative to that rack of lamb you’ve always served at Easter?  Michigan Venison Company offers all-natural, free-range venison options straight from Michigan—and they’ve got a rack worthy of any Easter spread.

If you ordered venison from an online retailer in the past—before 2009 to be exact—there’s a good chance that the deer whose meat was delivered to your door was raised in a rather faraway place. Maybe Texas. Could have been somewhere out east, like Pennsylvania or Vermont. Or perhaps even New Zealand.

Yes. New Zealand. Where the non-indigenous red deer and the kiwi play.

With a network of licensed Michigan farmers and ranchers providing their deer, Michigan Venison Company director of operations Kate Lane says that their business is to make venison a more mainstream protein choice. “It’s about being resourceful, and having a closer connection to your food. Venison is a staple of outdoorsmen in Michigan, yet it’s been largely available to only hunters. We want to make venison an ingredient used in every kitchen,” says Lane.

Comparing venison to beef proves to be unfair: venison is lower in fat, higher in protein, more dense in iron and b vitamins, and, according to Lane, venison has a much richer flavor. “I eat a lot of venison. But when I do have the occasional steak, I find the flavor of beef to be a bit bland,” Lane says. And while venison is widely considered to have a gamey taste, Lane thinks that perhaps that reputation is ill-founded: “Our products aren’t like the meat that your neighbor gave you in order to empty his deep freeze. Properly harvested venison has excellent taste.”

By “properly harvested,” Lane is referring to the practices that MVC’s suppliers adhere to. All deer are hunt-harvested and field-dressed, and the herds undergo frequent tests to ensure the sustainability and health of local deer populations. In the meantime, the deer are free to roam the thousands of acres of woodlots and farmlands where they are raised. This ain’t commercial farming, folks, and the Michigan Venison Company knows that their products are tastier and healthier because of it.

Michigan Venison Company is based in Traverse City, and is a featured retailer at ShopMyNorth.com

ShopMyNorth is an online marketplace that supports and promotes Northern Michigan businesses and craftsmen. If you’re a merchant interested in placing your company’s products on ShopMyNorth, please contact Drew Warner (231)-941-3102.