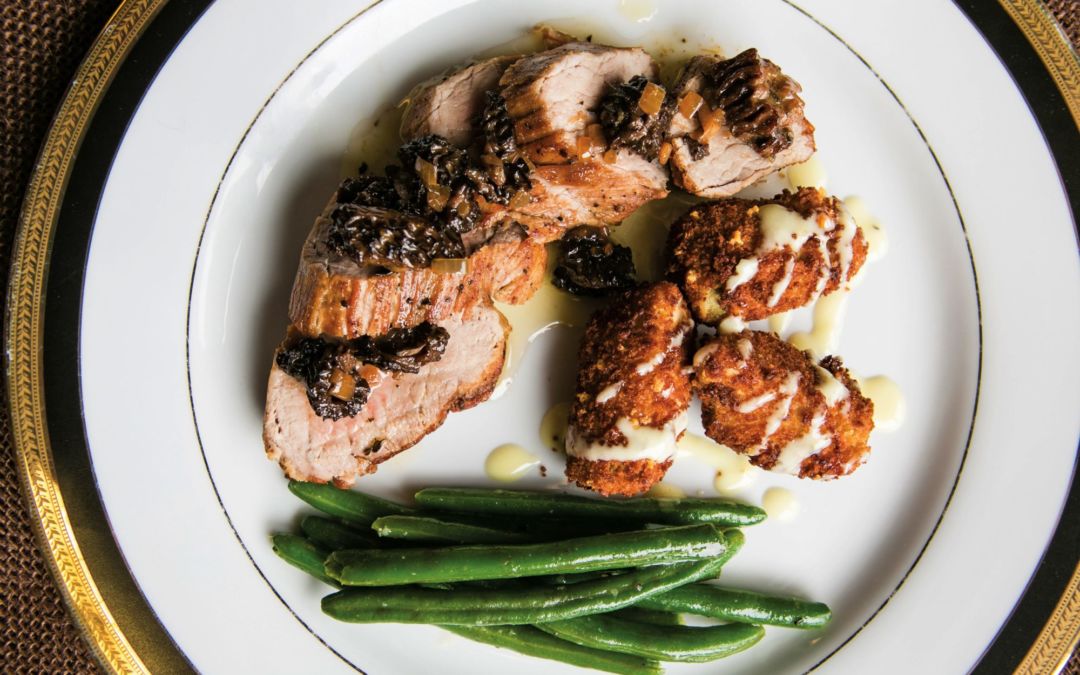 On a serpentine country highway east of Ellsworth, spring manifests in ramps and trillium ecstatically blooming on the hardwood hillsides. Hidden beneath them, nearly invisible against the leaf litter, is Morchella esculenta, the morel mushroom, the North’s most prized wild delectable. This delicate honeycombed fungus is the centerpiece of The Morel Dinner Series, a 38-year culinary rite of spring at The Rowe Inn that draws wine lovers and gastronomes from all corners of the Mitten.

This bright May morning at The Rowe is marked by the earthy omnipresence of morels. Their heady forest vapor pervades the kitchen and cavernous wine cellar, where proprietors Wes and Laurel Westhoven and their crew set about meticulously cleaning the abundant crates and baskets of freshly harvested morels, loading racks into a commercial dryer and filling whole mushrooms with the proprietary pecan stuffing that makes up one of the restaurant’s best-loved dishes.

Upstairs in the kitchen, chefs prepare the classic French components of tonight’s meal. Aromatic veal stock reduces to demi-glace, verdant local asparagus spears and spring peas get a quick saltwater blanch, and handfuls of morels and shallots slowly simmer in a cognac-laced cream sauce. The patriarch of local, seasonal fine dining in Northwest Michigan, Wes Westhoven approaches his 42nd season at The Rowe Inn with the same humility and dedication that has earned him generations of devoted customers. Join us as we step inside this storied country epicure to explore the history and anatomy of The Rowe Inn and its Morel Dinner Series. 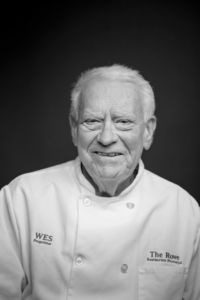 Wes was born into the restaurant business, growing up in Napolean, Ohio, where his family owned a country club dining room. He served an obligatory kitchen stint as dishwasher, garde manger and line cook before leaving to complete an MBA in hotel and restaurant management at MSU in 1968. Heading north, Westhoven saw an opportunity to fill the local void of fine dining. “It was a culinary wasteland up here when we started,” Wes recounts. “Fine dining went no further than prime rib and broiled whitefish.”

He found inspiration in French country inns and developed classic techniques and recipes from the venerated Escoffier playbook. He complemented his menu with a then small list of wines from Bordeaux, Burgundy and the Rhône Valley. Like the provincial European eateries it emulated, The Rowe put seasonal wild edibles on its menu from the onset. “ I had a beard and long hair in those days and people thought I was crazy,” Wes says. “They assumed we were too poor to buy produce, and that’s why we spent our time in the woods picking stuff.”

What they mostly picked were morel mushrooms, which the Rowe’s guests eagerly savored as they were served en croûte with cream, sautéed over veal loin or blended in savory bisques. Seizing on the popularity of these preparations, Wes decided to build a menu around the mushrooms and debuted his first Morel Dinner Series in the spring of 1976. Since that time the morel menu has become a May ritual, drawing several hundred patrons over its five-day span. “We have customers from all around the country who have attended these dinners for decades,” Wes says proudly. “Every year we build a menu with classic dishes and new ones.”

With morels central to its identity and usually appearing on the menu all year long, The Rowe has spent untold dollars during the past 40 years on the iconic fungus. “These mushrooms are a wild business,” Wes reflects. “We are at the mercy of Mother Nature’s supply, and everybody’s else’s demand.” Mother Nature’s supply can sometimes be staggering, as The Rowe has purchased and processed up to 750 pounds of morels during bumper harvests such as 2011, amassing a stockpile to offset leaner seasons. “It’s hard to believe a little restaurant can spend $12,000 on mushrooms, but we do.”

Stuffed with foie gras and served beside roasted quail or sautéed with fresh asparagus tossed in black truffle vinaigrette, The Rowe Inn’s sublime incarnations of these earthy morsels are lost without the company of good wine. “From the very beginning, wine has been at the center of what we do here,” Wes says strolling through his expansive temperature-controlled cellar that houses thousands of rare bottles. “For a little restaurant in the middle of nowhere, our wine list is an important marketing tool. People drive all this way for good food and wines they won’t find anywhere else.”

Wes built the cellar on research, intuition and expert input from longtime friend and legendary importer J.C. Mathis, founder of JetR Selections. In 1979, Westhoven began two decades of annual wine buying forays to Burgundy and the Rhône Valley. He created relationships tasting through some of France’s legendary cellars to find wines for his growing list, which now exceeds 800 selections, including library vintages of iconic bottlings dating back to the ’70s. When asked what he prefers to drink with roast veal and morel cream, one of his favorite dishes, Wes doesn’t hesitate. “I prefer morels with wines from the Southern Rhône Valley,” he says, “ideally a Châteauneuf-du-Pape that’s seven or eight years old. The earthiness of the mushrooms is echoed in the wine.”

His love affair with the Southern Rhône also prompted Westhoven to approach Bernard Latour of Domaine de l’Espigouette in Vacqueyras to produce a wine exclusively for The Rowe. Since 1984, 1,200 bottles of “Rowe Inn Cuvée” are made each year from syrah off one of Latour’s oldest vineyard plots. “The wine keeps getting better,” Wes says, “and this is the only place in the world you can drink it.” Now under the direction and tireless research of Wes’s wife, Laurel, The Rowe Inn’s wine program continues to evolve, folding in cult bottlings from California and amassing an impressive collection of rare blue chip Burgundies. Collectors from around the country have taken notice.

Much has changed in the culinary landscape of Northwest Michigan since The Rowe opened its doors in 1972, but Westhoven’s mantras of seasonal, locally sourced cuisine, great wine and professional service have remained constant and allowed his restaurant to thrive for four decades. “We’ve gone from cutting edge to retro in 40 years,” Wes wryly remarks. “Our best customers become our best friends, and that’s what allows us to keep succeeding.”

The clock strikes 4:30, and preparations begin in earnest as The Rowe Inn’s staff transfers the last batch of freshly cleaned morels to the walk-in cooler, bottles of Châteauneuf-du-Pape are brought up from the cellar, and the savory essence of spring woods effuses from the kitchen where pecan-stuffed mushrooms and rich morel cream are staged for service at tonight’s feast.

With some of The Rowe Inn’s classic morel recipes in hand, make your way to the May woods in search of the elusive morchella esculenta. Here’s a little ’shrooming wisdom to know before you go.