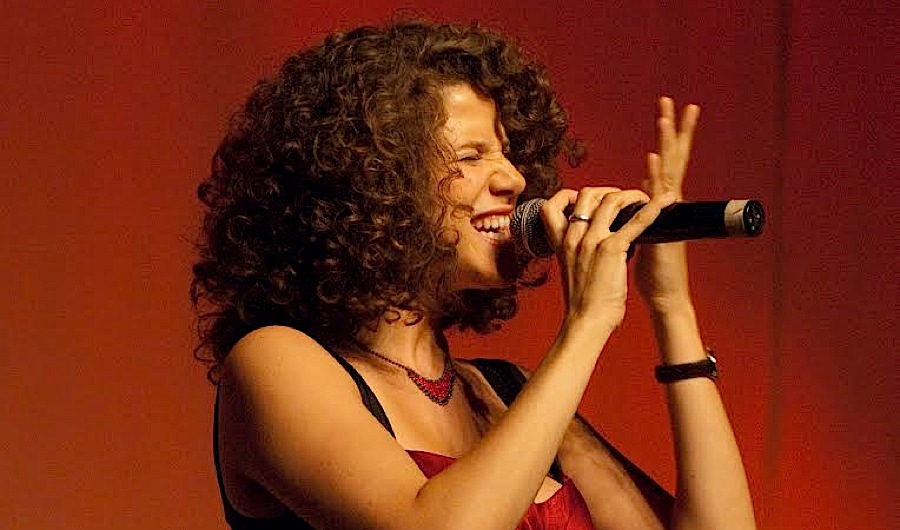 For Cyrille Aimee, her decision to sing jazz wasn’t really a choice at all. The daughter of a Frenchman and a Dominican woman, Aimee credits her upbringing in the village of Samois-sur-Seine with her falling in love with jazz. “Where I was brought up is the town where Django Reinhardt (the famed Gypsy jazz guitarist) used to live,” said Aimee. “Every year there is a Django festival. Gypsies come from all over Europe.

“When I was little I became friends with the Gypsies. I’ve been obsessed with their music and way of life.” So much so that during the festivals, she would sneak out her bedroom window and spend the evening with the Gypsies, learning their language and singing their songs. From there it was on to Paris, then her mother’s homeland, before landing in the U.S. to attend college at SUNY Purchase, with its proximity to New York City.

These all spurred further growth, as well as independent recordings. This year sees the release of Aimee’s first major label recording, featuring a band with bass, drums, and three guitars: Gypsy, jazz and Brazilian. Her touring band features that instrumentation less one of the guitarists. “It’s a new sound,” said Aimee. “I decided to work with the sound of a guitar. All three together is really different.”

For Aimee, that’s a key. She’s performed in a variety of settings, from duos with a single guitarist to working with a 40-piece orchestra, and most everything in between. “I don’t like to close myself to anything,” she said. That includes singing in languages other than what the audience can understand. Aimee says American audiences are open to her singing in her native language as well as English. “They love it” when I sing in French, she said. “French songs have very beautiful lyrics. “When they come to a concert of mine, they know they’re going to hear something other than English.”

As to what she will perform here, Aimee said there will be a mix of songs from her albums, originals and jazz standards. “I usually do a set list, but it’s subject to change,” she said. Elements such as the audience, the venue, and what the band played the night before all factor into the performance, both in terms of the selections and the way in which they songs are delivered.

For more information on Aimee or to hear clips from her music, go to CyrilleMusic.com or Youtube.

Tickets for Cyrille Aimee’s 8 pm performance April 25 show at the City Opera House begin at $20. For more information or to purchase tickets, go to CityOperaHouse.org.

Tickets for Aimee’s performance at West Shore Community College are Available at ShopMyNorth.com: