A state-of-the-art farmstead creamery sets out to craft world-class renditions of legendary French cheeses from the hills beyond Northport in Leelanau County.

Featured in the April 2014 issue of Traverse, Northern Michigan’s Magazine. 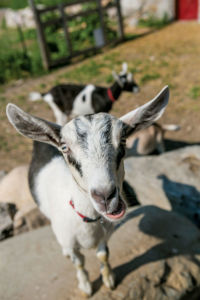 On April mornings the pastures and woodlands at Idyll Farms come to life after a long cold dormancy.  Cherry, apple and quince buds swell in the orchards. Wild leeks push up through the leaves. The white scrim of winter still clinging at the hillsides is interrupted by a green stubble of new grass, and everywhere there are goats. Seventy does and four bucks. A mixed herd of Alpines and Saanens wandering and foraging, nibbling on nutrient-charged shoots to enrich the milk that feeds their newborn kids and supplies Idyll Farms’ state-of-the-art creamery with the foundation ingredient of artisanal goat cheeses.

Informed by Old World aesthetics and driven by a passion for full-circle sustainable agriculture, Idyll Farms, in its second year of operation, is a bright spot in Leelanau County’s burgeoning artisan farm culture. We join Idyll Farms owners Mark and Amy Spitznagel to explore the genesis, design and daily rituals of farming and cheesemaking at their goat utopia on Northport’s Peterson Park Road.

Feeling a pull to connect with the landscape of his youth, hedge fund manager, writer and investment luminary Mark Spitznagel and his wife, Amy, purchased the 150-year-old Northport farm to reimagine its legacy. “Amy and I regard farming as something very important and undervalued in the modern day,” Mark says. “I grew up and attended school here, worked on cherry orchards in the summer. My family was always close with the farmers, and I feel that this is an important thing to pass on to our children.”

Historically a dairy farm, Idyll Farms encompasses 200 acres, culminating in a bluff overlooking Northport Bay and anchored by a 19th-century barn of weathered wood and local stone. “We see the barn as our connection to the history of this place and wanted to grow our farm organically around that,” Mark says. The structures that emerged from that vision were informed by Old World masonry seen in Amy’s travels in the Alps and Pyrénées, and realized by renowned restoration architect Kelly Sutherlin McLeod of Long Beach, California. He used huge stones excavated from the property to build the facade of the cheese aging caves, where precisely controlled humidification allows the farm’s washed and bloomy rind cheeses to develop a nutty depth of flavor that has local chefs and foodies scrambling for every pound.

The second phase of construction, currently under way, adds an expansive hay barn to store the farm’s organically grown hay, more housing for the expanding herd, and the reconstruction of a second barn on the property’s bluff for eventual use as a cheese-tasting and event space. “Last year was about testing our facilities and our markets,” Amy says. “We’re beginning to realize what the herd and creamery are capable of, and it’s really exciting.”

That capability—producing top quality French-style goat cheeses—has evolved with plenty of expert input, as the Spitznagels have recruited generational French herders and cheese technicians to work with Idyll Farms’ resident staff. “The consultants are our lifeline to the Old World and the old ways of doing things,” Amy says. “They bring centuries of heritage and perspective to the farm.”

Herder knowledge is especially valuable in April, during the busy spring kidding season, as Tinkerbelle, Amelie, Escapade and nearly 70 other does are finishing up a monthlong, around-the-clock birthing ritual that brings Idyll’s next generation of Alpines into the world. “There are a lot of kids jumping around this time of year,” Amy says of the 100 or so fuzzy, four-legged infants expected to be bouncing through the barns this spring.

Herdsmen Will Manty, Gaia Nesvacil and Melissa Hiles, along with consultants and seasonal staff, attend the loosely controlled chaos of birthing, bottle-feeding, milking and corralling the animals, while master cheesemaker Madeleine Vedel presides over the science of curds and whey. She is the one who adds rennet to the rich spring milk to build the foundation of bloomy goat camembert, creamy crottin and the washed rind tommes that will age in caves over the summer.

As Idyll Farms approaches its goal of 150 milking goats, it’s set to have the largest pasture-raised herd in the United States, with a potential annual output of 80,000 pounds of cheese. “There’s something particularly engaging about farmstead cheese,” Mark Spitznagel says when asked why he chose goats. “We are farmers, herders, cheesemakers and chemists facilitating a natural, sustainable process.”

The scope and science of Idyll Farms’ closed circuit sustainability is every bit as compelling as the cheeses made in its caves and creamery. “Our greatest assets are our pasture, our flora, our soil,” Mark says. “We want to support and nurture those assets rather than consume them. It’s important that we make good cheese that captures the terroir of our area, but it’s also about taking a stand against the destructive forms of monoculture that have taken over our food supply.”

To that end, the Spitznagels and their crew have organically cultivated the property’s flora to offer a broad spectrum of nutrients for the goats. Legumes, grasses and fruit trees dot the rolling pastureland. Chickens clean up parasitic insects and fertilize the soil. The farm’s pigs are fed whey from the creamery and run under the orchards. Garden plots grow vegetables and medicinal herbs for the goats.

“One of the coolest things about this is its vertical integration,” Mark says. “Each area of the farm supplies the next. Our process starts with sun and grass and ends up in a cheese cave.”

As the cheese program develops, so too does the produce. Organically grown quince and chestnut trees supply classic accoutrements for cheese tasting. “We like to think we’re milking the whole farm,” Amy says.

The cheesemaking at Idyll Farms is dynamically seasonal, like the pastures themselves. French cheese technicians Helene Tormo and Jacky Mege have taught the Spitznagels and Vedel a sensitivity to the goats’ changing milk qualities over the course of the year. “Most American cheesemakers rely on animals that are fed the exact same thing every day,” Amy says. “We can’t do that, so we’ve had to learn to modify our recipes based on the milk we’re getting at any given time.”

This terroir-driven approach to cheesemaking follows the arc of the goats’ diet from spring through fall, with the best cheeses produced later in the year following a surge of nutrients as the mother goats wean their kids. In the heat of summer, when the goats are feasting on grass and drinking lots of water, the milk has lower fat content and higher acidity, making it perfect for the fresh lactic chèvres that can go from udder to hors d’oeuvres in a few short days.

Up along the bluff at Idyll Farms, as the April sun sets, evening milking will commence amid a cacophony of bleats from curious goats and their kids. Amy Spitznagel will help shuttle does in and out of the 24-stand milking parlor, where humming pneumatic pumps extract rich milk, a distillate of early spring in Leelanau County, to be set, strained and molded into delicious logs, disks and creamy spreads savored on dining tables all around the North.

“We as a society need to have higher regard for the farm as a system,” Mark Spitznagel says, speaking to the long-term sustainability of small-scale agriculture. “It’s very productive and efficient and improves itself over time. The best thing our team can do is show people a product they want that’s ecologically responsible, not made in a factory. Once they taste the cheese and understand the value, the market will take care of itself.”

Fromage Fundamentals: Get Your Goat Cheese

Devoid of lactose and lower in fat than cow’s milk, goat’s milk makes for some of the world’s finest fromage. Baguette in hand, we explore the styles made at the Idyll Farms Creamery.