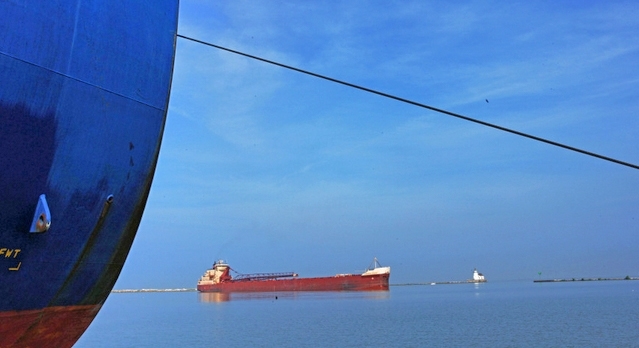 Iron ore, coal and limestone stream from Northern Michigan ports to power the manufacturing and energy economies of the Midwest.  Yet as ice continues to coat the Great Lakes—and cargo ships struggle to make deliveries—the balance between supply from marine transport and demand from industrial plants is being stretched.  MyNorth’s Evan Perry contacted the Lake Carrier’s Association—the Ohio-based trade organization dedicated to supporting Great Lakes shipping—and spoke with the organization’s Vice President Glen G. Nekvasil about shipping through the worst winter in 20 years.

How does this winter measure up against previous winters in terms of navigating the Great Lakes?

The ice is very difficult; it’s the worst since the winter of 1993-1994.  In some places, lake ice is more than four feet thick, which is pushing the limits of Coast Guard ice breakers that operate in the Great Lakes.  One of the first convoys that traveled across Lake Superior [from Duluth, Minnesota to Sault Ste. Marie, Michigan] took 9 days to complete its trip; that’s a route that normally takes 30 hours.

This winter began early—and in full force—and has stuck around for a long time.  The fact that it started so early meant that it was more difficult to build stockpiles of materials at power plants and mills.  Ice breaking operations began on December 6th, which is the earliest date on record.

Where are these materials being loaded, and where do they end up?

The primary cargoes at this point are iron ore and coal.  Most of the ore is mined in Minnesota, which is shipped out of Duluth; some of the ore is transported on train to Escanaba for shipping.  Coal is generally shipped out of Wisconsin after being railed from states like Colorado and Wyoming.  Ore is shipped south to steel mills in Indiana, Ohio, and elsewhere, and the coal goes to power plants throughout the Great Lakes.  Because of this winter’s ice, US Steel has halted production at its Gary facilities because there isn’t enough ore.

Limestone, though, doesn’t usually start to ship until later in the spring: the stone gets rinsed before it’s shipped, and you don’t want the water freezing on the limestone.

How soon do you think shipping conditions will improve?

By the middle of April, things are normally up to speed; I’m not sure if we’ll get there this year.  The Coast Guard is planning to break up the Saginaw Bay this weekend.

Right now, there are convoys of ships moving along shipping routes. Each convoy consists of four or five cargo ships following an ice breaker or two, with each ship carrying more than 60,000 tons of material.  Every customer’s stockpiles are low at this point, so nobody can afford to wait for better conditions.