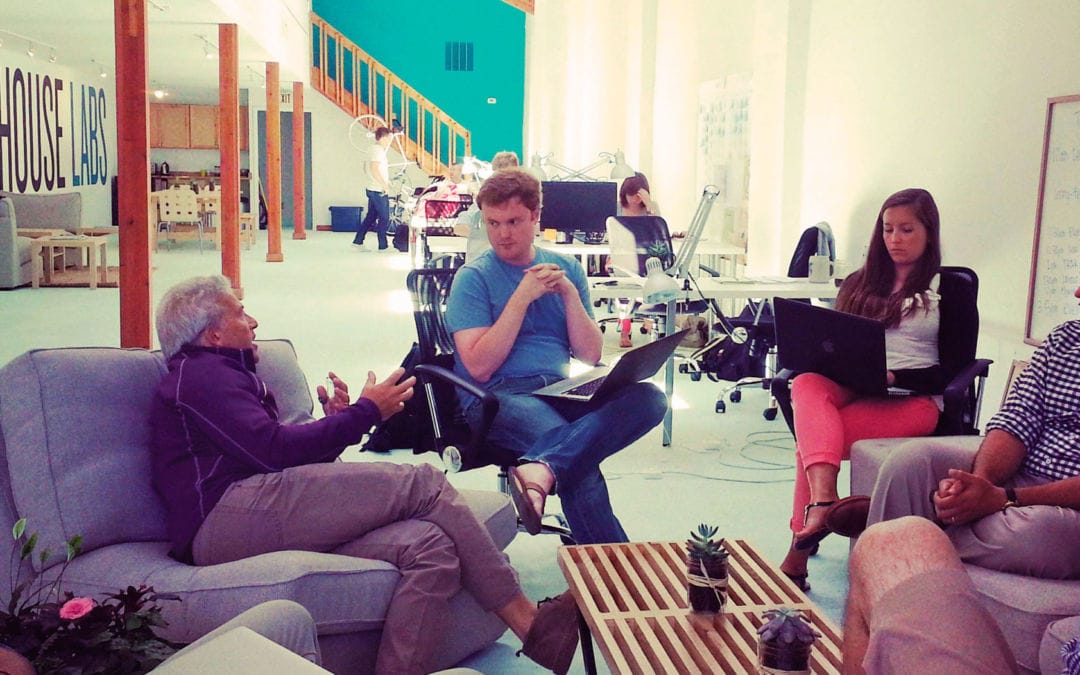 Northern Michigan-native Jordan Breighner is a visionary twenty-something: his brainchild, Cool House Labs, was an effort that allowed him to both live here and permitted tech whizzes to relocate to the Northern Michigan (if only temporarily) to develop their businesses. MyNorth contributor Kate Bassett profiles this Harbor Springs homeboy who’s leveraging his moxie and the North’s beauty to lure high-tech dreamers for web-business bootcamp—and possibly to put down roots of a next gen economy.  The following content was first featured in the 2014 April edition of Traverse, Northern Michigan’s Magazine. 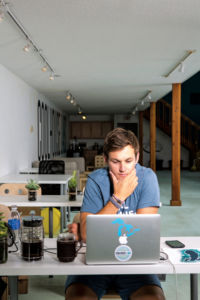 Jordan Breighner is a big believer in moving forward … fast. From his years as a ski racer to his time with the Obama campaign, and later, the White House, the Harbor Springs native—who turns just 28 this month—talks quick and thinks quicker. He’s a textbook millennial attempting to do good and live well in his hometown.

← Breighner founded Coolhouse Labs, a technology accelerator—essentially an incubator for web-based businesses—located on Main Street in downtown Harbor Springs, in 2013. He brought in five teams of start-up companies (from as far away as Taiwan and as close as Chicago) for 12 weeks, June through August, giving them $25,000 in capital, plus the opportunity to work with a team of designers, developers, and mentors in exchange for 6 percent of their companies. It’s a tried and true, albeit high-risk, investment model found in bigger cities across the country. What makes Breighner’s setup extraordinary is his energy and vision, and the choice of location.

“Everything came down to this simple question: how do we get talented young people back into small towns, and back into Harbor Springs specifically?” he says.

“I knew from experience great things happen when young, creative people come together. I also knew there had to be something to bring them together. A lot of times, I think small towns tend to limit their focus inward. I wanted to reverse that focus outward, to show not only how a small town business can have global customers, but also, how talent can be recruited from all over the world.”

The first time I met Breighner, we were sitting in the Stained Cup Coffee Company in Harbor Springs. His fingers were tapping the table like he’d had a hundred espressos, and he spoke with a sort of authoritative determination one could easily mistake for arrogance (I did).

It was February 2013, and we’d had almost a month stretch of dreary, gray days. Summer felt a long way away, but surely not long enough for Breighner, who was living in New York City at the time, scrambling to finish a business plan, find investors, secure a space, assemble a team, and identify good start-ups to open Coolhouse Labs by June.

We talked several times in the months following. He’d send updates in the form of three-line emails and links to bios for advisers and mentors he’d lined up. He asked Rob Mossburg, owner of the Cottage Company in Harbor Springs, who played a key role in Coolhouse’s earliest days, to call and share his enthusiasm for the program. It seemed Breighner’s crazy idea was picking up steam. 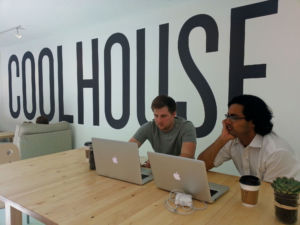 And when June 2013 rolled around, Coolhouse Labs did, indeed, open its doors.

“I don’t give up on things I believe in, and I think we sort of willed Coolhouse into existence. We are really fortunate to also be in a place where a lot of entrepreneurial talent lives or summers. Those connections were key in creating a deep bench of more than 60 mentors—something that really sets us apart—who donate their time and expertise. More than 20 of them came, on their own dime, to help and establish relationships with the teams. While here, they discovered the beauty of Harbor Springs. A lot of people hadn’t left before they were making plans to come back,” Breighner says.

Walking into Coolhouse Labs last summer felt like walking through some sort of magical teleporter. If not for the killer view of Little Traverse Bay, road bikes hanging on the stairway or towels slung, still wet with lake water, over the backs of chairs, it might have seemed more like Silicon Valley than Northern Michigan.

Energy hummed in the open, modern space. Young people—nearly all in their 20s—sat on couches, at desks or on the enormous windowsill, talking and hovering over laptops, sipping coffee or beer from the in-lab keg. Sticky notes and schedules were tacked up on the walls, and marker scribbles covered the all-glass conference room upstairs—lists of ideas, problems, possible solutions … as well as a joke or two better suited to a bathroom stall.

“The accelerator program is a lot like summer camp for start-ups,” Breighner says. “It’s a place to get away from the intensity and stress of the city, but also, there is a ton of creative friction happening on a daily basis.”

With its “small town, big ideas” mission, the whole concept is hinged on turning a community’s weaknesses into its strengths.

“Look,” Breighner said in a recent interview as he leaned back on a couch in the lab. He took a sip of black coffee from a leather-wrapped Mason jar embossed with the Coolhouse logo: a series of circles, representing a ripple in the lake. 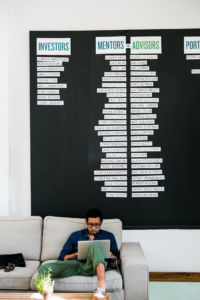 “As a town, we don’t have the activity, energy, or excitement levels that exists in a big city. What we do have is an incredible quality of life. We aren’t going to be attractive to everyone. That’s okay. We have a place where people can be hyper-focused when working, and yet, can step outside and be at a lake or walking through a nature preserve or farmers market within minutes.

“There has been a fundamental shift in my generation, I think by necessity,” he continued. “When we left college, jobs weren’t there like they were in the past. We’ve had to think about quality of life first, and careers second.”

Breighner says there are few places on Earth that beat Northern Michigan in terms of that much-desired work-and-life balance. While Harbor Springs may have a long way to go before being known as a hub for a creative, work-from-anywhere kind of economy, he believes in this place enough to take the risk.

“I didn’t get the full experience of growing up here. I traveled all over the world without my family, dealt with the struggles of going from a small pond to a very, very large one (he moved to Park City, Utah, at 14 to try and make the U.S. ski team). I had some success, but also, a lot of failure. There’s nothing like failure to make you realize what’s important in life.”

Breighner chased the ski-racing dream for two more years after high school before going to the University of Utah. He said he wanted to get out of school as fast as possible, “to experience life” and finished in just two years. From there, he went on to work for the analytics team of Obama’s 2008 campaign, as well as the White House’s Office of Legislative Affairs and the Department of Homeland Security.

Breighner briefly led a start-up in Boston before settling in at SS+K, an advertising and consulting firm in New York City. When his Harbor Springs mom, Kathie, who sits on at least nine boards, volunteers endlessly, and is usually in the thick of what-makes-a-vibrant-community discussions, started talking about a lack of young people and decent paying jobs in his hometown, the wheels started turning.

“Emotionally, I was never that far from home. I stayed connected through my parents, and I always knew if I could find a way to come back here, I would. I think there are a lot of young people who feel the same way.”

While Coolhouse Lab’s first season was a success—one of his teams just had a half-page, full-color write-up in the Wall Street Journal—Breighner said he knows the company still has a lot of learning and growing to do.

“We’re just coming out of our beta year. We were a start-up too. Looking forward, I think we need to continue to grow our connection within the local community as well as the Midwest start-up community. I see Coolhouse as a catalyst for bringing talent to the area. It’s a 20-year perspective, but I think it will change the way we look at technology and what it can do for us in terms of job creation and maintaining a strong year-round economy.

“In the meantime, we’ve created a nonprofit arm of Coolhouse Labs to have a fellowship program for the off-season, as well as a way to develop already existing talent in the area and to help local companies with design, development, and technology.”

Tall and slender, usually wearing Sportivo shoes and a Patagonia jacket, Breighner has been called “cocky” and “big city” more than once since returning. He usually just shrugs and pulls up a half-smile. The truth is, behind the bravado exists a boy who still loves to wake up early and kayak across the harbor, who believes in dreaming huge, and who, perhaps more than anything, wants to make his community proud.

“I had this moment the first week of the program, when all the teams, some mentors, and a few venture capitalists were sitting on a porch for a potluck barbecue. I couldn’t believe the amount of talent around the table, and how we were doing exactly what we all love to do here—eating good food, drinking beer, looking at the lake—yet the conversation was so different. I realized how lucky I am to be part of building a creative entrepreneurial community that could have a lasting impact in a place I love so much.”

During the Harbor Springs Area Chamber of Commerce’s annual “Harbor Heroes” dinner last October, Breighner was awarded “entrepreneur of the year.” He stood before a packed crowd, gripped both sides of the podium, and started to speak in an uncharacteristically slow, shaky voice.

He thanked everyone in the room for their support, before tearing up and ending quickly with, “the best part of all of this is that I get to be home.”
A roaring applause followed, but not just for Breighner. It was for all the young people who’ve gone away and dream of coming home. It was for possibilities. It was for small towns, big ideas.

Coolhouse Labs always welcomes visitors (and usually has Petoskey Brewing Company brew on tap and at the ready). The end of summer “demo day” and Harbor Creators Collective might be the coolest time to check out the Coolhouse cohort, as teams and local artisans come together to showcase their wares, pitch their companies, and bridge the divide between technological and digital creators. It happens this year on August 28. For updates or to learn more, visit coolhouselabs.com. 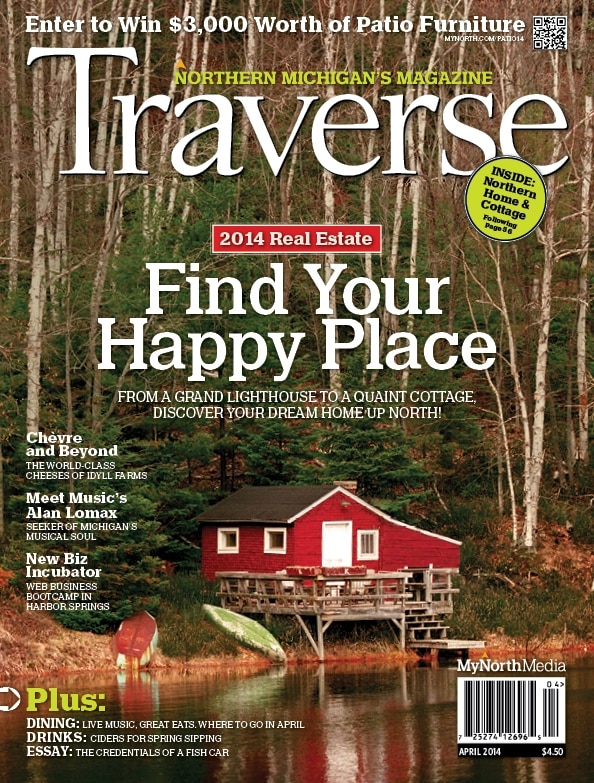