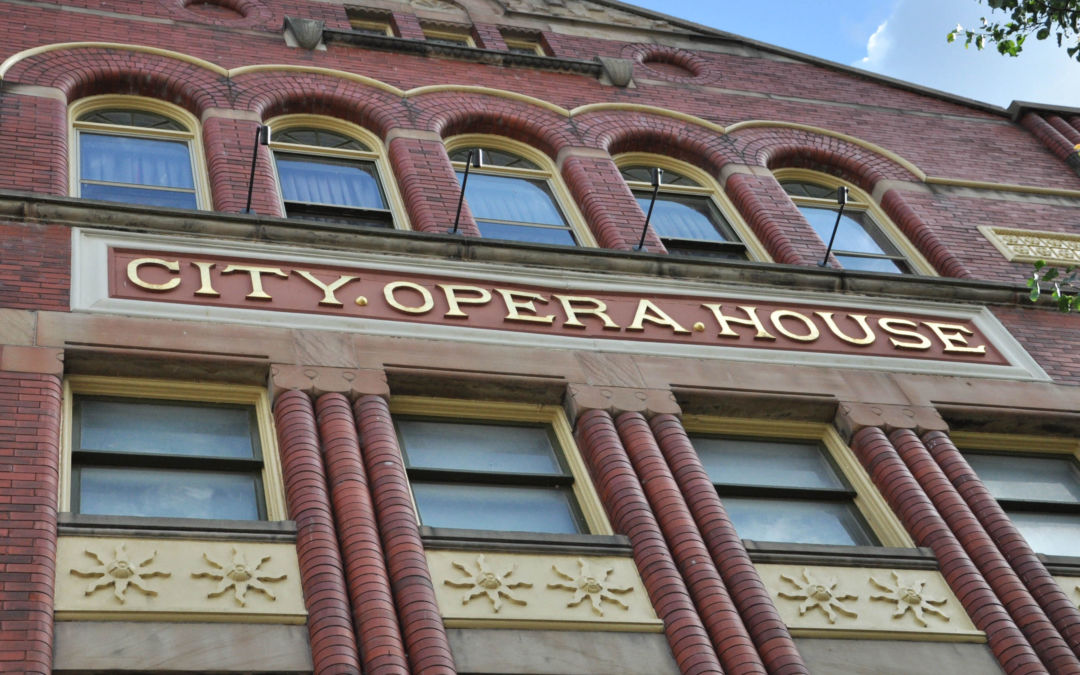 Starting this autumn, the City Opera House in downtown Traverse City will commence its 2014-2015 Performing Arts Series.  Featuring a mix of innovative music acts and stage performers, the ten performance events are underwritten by Auto Owners Insurance and the Wharton Center for Performing Arts.

“Return to the roots of jazz, America’s great indigenous art form, and don’t miss an opportunity for a performance by the ‘best jazz band in the land.’” — The San Francisco Examiner

For nearly fifty years, the Preservation Hall Jazz Band has brought the joy of traditional New Orleans Jazz to fans around the world. Joining is the great New Orleans music legend, Allen Toussaint. Musician, composer, producer and National Medal of Arts recipient, Allen Toussaint has collaborated with everyone from Elvis Costello to Eric Clapton.

“A vocal kaleidoscope…unique to the human voice.” — The New York Times

Although they are simply four voices and a tambourine, Tonic Sol-fa has carved their niche as the nation’s top vocal group. This quartet has been named one of the top five must see groups in America. Melding their uncanny harmonies with a pure sound, they cover everything from the Beatles to cartoon theme songs. Tonic Sol-fa has been awarded an EMMY® Award for their arrangements, had Special Features on Public Televisions, and appeared on NBC’s Today Show and Newsweek magazine plus outings with Jay Leno, Shawn Colvin and Garrison Keillor which have earned Tonic Sol-fa thousands of intensely loyal fans.

“The capacity crowd nearly brought the house down at the end of the evening.” – The Village News

As seen on PBS, this wildly popular show brings just about everything we love about Irish rural culture to the table – joy, hope, laughter, friendship, celebration of life through storytelling, music, song, and dance in a night that sparkles with life and a bit of ‘magic!’ Don’t miss a rip-roaring celebration of Christmas from the heart of glorious Ireland with special guests: Kevin Horton, Riverdance and Magic of the Dance stars: Ciaran Maguire & Collette Dunne (“the fastest feet in the business!”).

In the corner of a forbidden attic sits a long-forgotten trunk filled with mysteries and magical stories lost to the world for many years. Join two young explorers as they discover the trunk and are immediately captured by its secrets and the Long Lost Storiesinside. Madcap Puppets brings big ideas to audiences of all ages with their amusingly eccentric vision! Thanksgiving weekend, COH Family Series

Experience the magic as the past comes alive this holiday season with Bing Crosby, the Andrews Sisters, Betty Grable, Carmen Miranda and Glenn Miller. From a live radio drama complete with sound effects, to the heartwarming music that made Christmas special for the boys overseas, Five By Design adds holiday flair. Be a part of the studio audience and experience firsthand the excitement of a live radio broadcast in a musical evening of fun and laughter.

Robert Dubac’s The Book of Moron

High Concept comedy that is Provocative and Smart”; “A Razor-sharp Comedian”- The Denver Post

Robert Dubac’s newest one man show, The Book of Moron, combines theater with stand-up. Buckle up for a fast-paced joy ride over the pot-holed highways of cultural hypocrisy. Riding shotgun with intelligence and absurdity, Dubac crashes head first into the barriers of sex, race, religion, politics and the media. With mesmerizing ease, he portrays multiple characters who all take turns beating the hornet’s nest of hype and spin with the big stick of knowledge.

The Hot Sardines are born of a unique musical recipe: hot jazz and sultry standards from the 1920’s, 30’s, and 40’s, sprinkled with the rich sounds of New Orleans, a dash of 40’s Paris flavor, infused with vibrant musical surprises that hold audiences captive. Steeped in salty stride piano, and the kind of music Louis Armstrong, Django Reinhardt and Fats Waller used to make, The Hot Sardines make straight-up, foot-stomping jazz. They invoke the sound of a near century ago, yet stay right in step with the current age.

This world-renowned three-man comedy troupe takes long, serious subjects and reduces them to short, sharp comedies. They have abbreviated man’s most profound accomplishments, including the works of the Bard, the word of God, and the history of the United States. Now they take on the most serious subject of all: Comedy. In this brand new production, the “Bad Boys of Abridgement” will deconstruct the funny and find out what makes people laugh.

“Their sly mix of hot licks and cool vocals remains equally driven by the twang of Texas roadhouses as the gypsy string jazz of Reinhardt and Grappelli.” — Country Standard Time

Hot Club of Cowtown holds with tradition and refused to modernize, with instrumental workouts that are fret board-blistering. The Austin Texas-based trio performs Western swing, Gypsy jazz and cowboy tunes with equal ebullience and sprightly charm, with earnest sincerity and impeccable musicianship. Between the fiddle, guitar and vocals, this group has it all. Lovers of old-fashioned country will have a great time, and audiences that disdain country music will love this trio.

“… If anyone can extend the lineage of the Big Three—Billie Holiday, Sarah Vaughan and Ella Fitzgerald— it is this 23-year-old virtuoso.” – The New York Times

One the finest young singers on the hot jazz scene. Winner of the 2010 Thelonious Monk International Vocals Competition, her American debut album, the Grammy-nominated WomanChild, was the first opportunity for American audiences to hear why she has become a European sensation. Celebrated for her deep, velvety voice, rhythmic poise, and a sublime feel for the blues, she combines conservatory-honed technique with a beguiling gift for lyrical interpretation in the jazz style of the 20’s and ’30’s. Hear the future of jazz, now.

To purchase tickets to the above events or to learn more about the City Opera House, please visit CityOperaHouse.com, call the Opera House’s box office at 231.941.8082, or visit them at 106 E. Front St. in downtown Traverse City.