Blue Angels Back for 2014 Cherry Festival 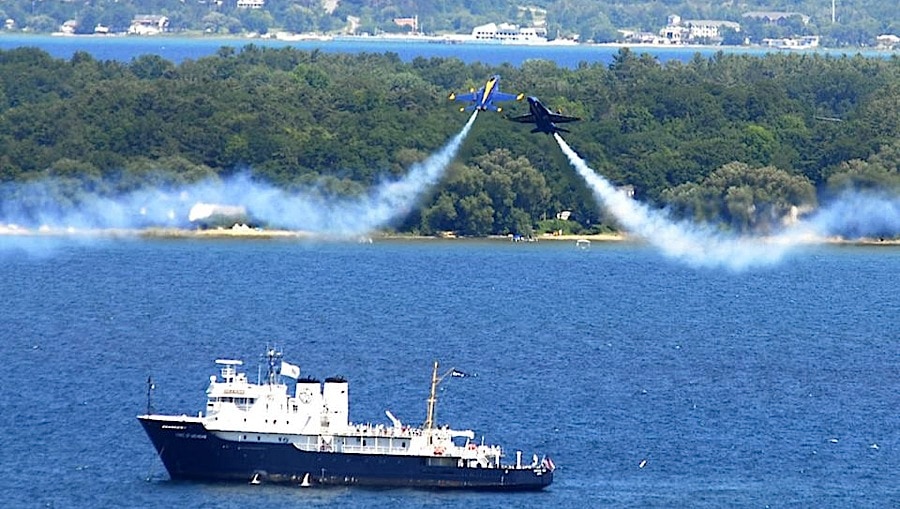 During their aerobatic demonstration, the U.S. Navy Blue Angels fly six F/A-18 Hornet aircraft, split into the Diamond Formation. The Diamond performs maneuvers such as formation loops, barrel rolls, and transitions from one formation to another. The Solos showcase high-speed passes, slow passes, fast rolls, slow rolls, and very tight turns. The highest speed flown during an air show is 700 mph.

Traverse City is the center of America’s tart cherry industry, with over three million trees in production, and it celebrates that heritage every year during the first week of July with an eight-day party featuring over 150 family activities: air shows, fireworks, parades (including the nation’s largest all-children parade) games, races, midway rides, demonstrations, nightly outdoor concerts and lots of chances to taste delicious cherry products. The Cherry Festival is Traverse City’s signature event, drawing as many as 500,000 attendees from around the country.

The Cherry Festival is centered within walking distance of most of Traverse City, and since most of the events are free, the festival offers more than a week of affordable family fun.

The F-22 Raptor is the Air Force’s newest fighter aircraft.  Its combination of stealth, supercruise, maneuverability, and integrated avionics, coupled with improved supportability, represents an exponential leap in warfighting capabilities.

Bremont are delighted to announce the arrival of ‘The Bremont Horsemen’ WWII display team. The Horsemen took off over a decade ago as the world’s only P-51 Mustang formation aerobatic team. Since that time, the team also flies in formation F8F Bearcats, F4U Corsairs, F-86 Sabres, the P-38 Lightning and most recently, Spitfires.

Billy Werth is now a Captain on the Embraer 145, based in Indianapolis. Billy has over 6000 hours of flight time in 20 different aircraft, with 600 of it teaching folks how to fly upside down.

The History of the National Cherry Festival