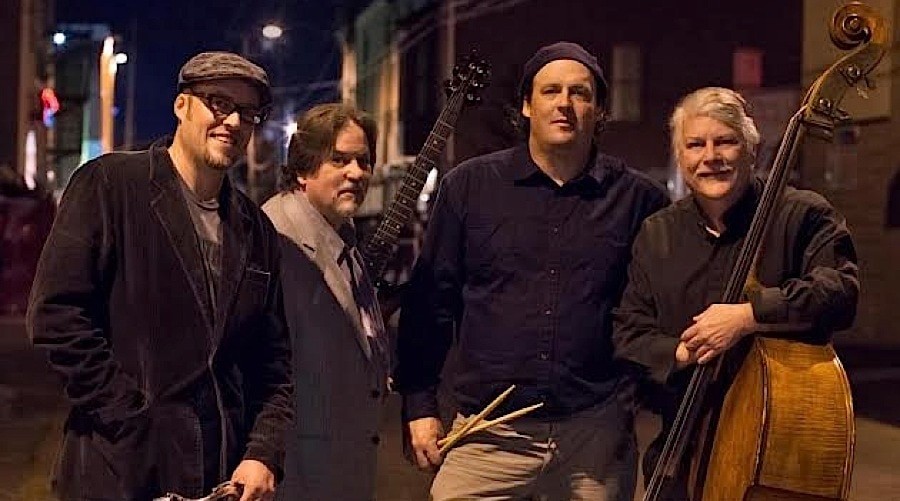 There’s no better way to honor the life and artistry of a musician than to perform the music that he loved—and that’s exactly what a legion of Northern Michigan musicians will be doing to honor the passing of Charlie Tomlin.  A commemorative concert is scheduled in Traverse City on Sunday, March 16th.

When guitarist and bassist Charlie Tomlin unexpectedly passed away on Tuesday, February 25th, he left behind a host of friends and musical colleagues. Those people are joining together for a tribute show to raise funds for Tomlin’s funeral expenses and to celebrate his musical life. “Groovin’ for the Groove Master” will take place at Shimmers Lounge at the Holiday Inn from 2 to 6 pm. Featured artists will include David Chown and the Lookout Cats, The On Quartet, Jeff Haas and the Outside In Quartet, Trippin’ Lindys, and many more. Tomlin was a member of both the Lookout Cats and the On Quartet.

With the Lookout Cats, Tomlin played tunes as varied as “Addicted To Love,” “Ain’t No Mountain High Enough,” “Boot Scootin’ Boogie,” “Brick House,” “Fields of Gold” and “Fly Me To The Moon.” His work with the On Quartet was more a groove-oriented jazz. In between, he played rock, pop and more with a host of musical friends.

Tomlin was also a longtime instructor at Northwestern Michigan College. His colleague there, Mike Hunter, praised his abilities both as a guitarist and as a teacher. “Charlie was a very versatile guitarist—probably the most versatile guitarist I ever played with,” said Hunter. “He had any style nailed down. Charlie was the funkiest groove player. He could take a funk tune and dress it up and never lose the groove. He was a very good jazz player, and a fantastic bass player.”

Hunter says students enrolling for guitar studies at the college can range from beginner to advanced, from just starting out to knowing some chords and riffs to being able to read music and improvise. Tomlin’s gift was being able to work with the student no matter what level they were at. “His versatility allowed him to understand any student’s needs. He could communicate on any level,” Hunter said.

Don Routzahn took up bass in his 40s after playing guitar earlier. He hooked up with Tomlin for lessons. “Charlie really expanded my horizons musically,” said Routzahn. “He got me comfortable with music beyond the blues and rock. He took me out on some gigs with him and David Chown.” Routzahn eventually landed with Luther Gravey and the Soul Biscuits and after that with the Bihlman Brothers. He co-wrote songs with Soul Biscuits guitarist Mark Ducommun for a CD that came out last year under Ducommun’s name, and the personnel credits included Tomlin.

A suggested donation of $10 will be accepted at the door. Checks may be made out to the Traverse Area Musicians Relief Fund, with the memo line specifying Charlie Tomlin Benefit. There will also be silent auction items to bid on, including some of Tomlin’s equipment. If you cannot attend but would like to donate, you may mail a check to Traverse Area Musicians Relief Fund: c/o Charlie Lakritz, 4696 Harr Dr. Traverse City, MI 49685.